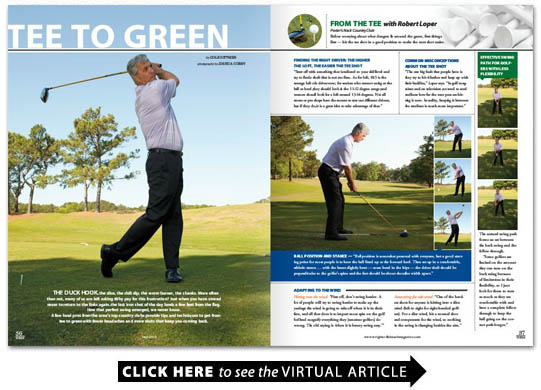 The duck hook the slice the chili dip the worm burner the shanks. More often than not many of us are left asking: Why pay for this frustration? Just when you have vowed never to return to the links again the last iron shot of the day lands a few feet from the flag.
How that perfect swing emerged we never know.

A few local pros from the areas top country clubs provide tips and techniques to get from tee to green with fewer headaches and more shots that keep you coming back.

From the Tee with Robert Loper

Before worrying about what dangers lie around the green first things first hit the tee shot in a good position to make the next shot easier.

Finding the right driver: the higher the loft the easier the tee shot

“Start off with something that is tailored to your skill level and try to find a shaft that is not too firm. As for loft 10.5 is the average loft of a driver now; for seniors who cannot swing at the ball as hard they should look in the 11-12 degree range; and women should look for a loft around 13-14 degrees. Not all stores or pro shops have the means to test out different drivers but if they do it is a great idea to take advantage of that.”

Common misconceptions about the tee shot

“The one big fault that people have is they try to hit it farther and keep up with their buddies ” Loper says. “In golf magazines and on television we tend to read and hear how far the tour pros are hitting it now. In reality keeping it between the tree lines is much more important.”

“Ball position is somewhat personal with everyone but a good starting point for most people is to have the ball lined up at the forward heel. Then set up in a comfortable athletic stance with the knees slightly bent some bend in the hips the driver shaft should be perpendicular to the golfers spine and the feet should be about shoulder width apart.”

Hitting into the wind:

“First off dont swing harder. A lot of people will try to swing harder to make up the yardage the wind is going to take off when it is in their face and all that does is to impart more spin on the golf ball and magnify everything they [amateur golfers] do wrong. The old saying is when it is breezy swing easy.”

Accounting for side wind:

“One of the hardest shots for anyone is hitting into a slice wind (left to right for right-handed golfers). For a slice wind hit a normal shot and compensate for the wind so nothing in the swing is changing besides the aim.”

The natural swing path forms an arc between the back swing and the follow through.

“Some golfers are limited on the amount they can turn on the back swing because of limitations in their flexibility so I just look for them to turn as much as they are comfortable with and have a complete follow through to keep the ball going on the correct path longer.”

The Approach with Joey Hines and Chris Byrd

Getting to know your irons

Adapting your stance to each iron

“For longer clubs you need a wider base because you need to balance more ” Byrd says. For irons your feet should be placed just inside shoulder width. With a 9 iron center your stance with the ball in the middle. As the stance gets wider for longer irons move the back foot away from the target so the ball position moves naturally forward.

Hitting from the rough

“The golfer will need to play the ball in the middle of their stance or slightly behind middle to make sure they hit the ball first ” Byrd says. You want to hit down on the ball from a steeper angle “so youre not dragging the club through the grass. That kills the momentum of the follow through.”

“You want to swing your wedge just like your driver ” Byrd says. “If you have the same tempo all the way through the bag you rule out a lot of inconsistencies and a lot of errors that can sneak up. If you swing your driver hard and then swing your wedge easy at some time or another one of those is going to take over and youll run into problems.”

“The center of the green is always the best target ” Byrd adds. “You may have a longer putt but it is not a bunker shot.”

Quick tips for a better approach

“I see problems with tension in the arms and squeezing the club way too tight. … The more relaxed you are and the more free-flowing your swing is the more consistent your shots are going to be ” Hines says.

Around and on the Green with Sara Bush

While the short game may take the least amount of physical strength it requires the highest degree of mental concentration.

Advice for the struggling chipper

“Everyone has equal opportunity around the green and on the green and what I mean by that is it doesnt take a lot of strength or an extremely fast clubhead speed ” Bush says. “It takes solid fundamentals and learning touch.”

“For an amateur or a high-handicap player I would say learn the chipping stroke with a club that does not have the most loft ” Bush says. “For example instead of choosing a sand wedge I would suggest using a 9 iron. Looking at a 9 iron you wont see too much loft and often when amateurs are looking at a club with a high loft they want to help the club get the ball in the air; when in reality you want to encourage them to hit down on the ball for crisp contact.”

“Reading a green correctly just comes from a lot of experience ” Bush says. “Whether a putt is dead straight or a severe break every one should be hit as if it were dead straight to concentrate on making solid contact. This is going to prevent you from pushing or pulling putts on side-hill lies.”

From the bunker consider this

“The most important thing to understand with a bunker shot is what you are trying to do ” Bush says. “What I mean by that is you need to understand that it is not the ball you are hitting out of the bunker it is actually the sand you are hitting that is carrying the ball out. That means entering the sand 3-5 inches behind the ball with a sand wedge and that can be hard for amateurs to get around.”

“Putting is a little more tedious to practice if you dont get creative around the putting green ” Bush says. “Work on drills that are 5 feet and in which is really more of a confidence builder than anything. If you can make even 50 percent of your 5-footers you are going to be in decent shape because many times the 5-footer is your par or bogey putt.”

Four tips to avoid the three-putt

1. Understanding and having a good feel for pace is crucial; pace is more important than path.

2. Make sure that you truly understand and are lining up on the intended target line.

3. Ensure that the putter is the appropriate length weight and visually meets your eye.

4. The most important thing to think about when you are standing over a putt is that you are going to make that putt. You will be a good putter if you believe you are a good putter.