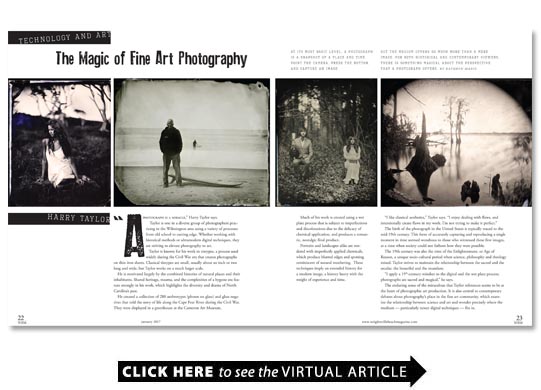 At its most basic level a photograph is a snapshot of a place and time. Point the camera press the button and capture an image.

But the medium offers so much more than a mere image. For both historical and contemporary viewers there is something magical about the perspective that a photograph offers.

“A photograph is a miracle ” Harry Taylor says.

Taylor is one in a diverse group of photographers practicing in the Wilmington area using a variety of processes from old school to cutting edge. Whether working with historical methods or ultramodern digital techniques they are striving to elevate photography to art.

Taylor is known for his work in tintypes a process used widely during the Civil War era that creates photographs on thin iron sheets. Classical tintypes are small usually about an inch or two long and wide but Taylor works on a much larger scale.

He is motivated largely by the combined histories of natural places and their inhabitants. Shared heritage trauma and the complexities of a bygone era feature strongly in his work which highlights the diversity and drama of North Carolina’s past.

He created a collection of 280 ambrotypes (photos on glass) and glass negatives that told the story of life along the Cape Fear River during the Civil War. They were displayed in a greenhouse at the Cameron Art Museum.

Much of his work is created using a wet plate process that is subject to imperfections and discolorations due to the delicacy of chemical application and produces a romantic nostalgic final product.

Portraits and landscapes alike are rendered with imperfectly applied chemicals which produce blurred edges and spotting reminiscent of natural weathering. These techniques imply an extended history for a modern image a history heavy with the weight of experience and time.

“I like classical aesthetics ” Taylor says. “I enjoy dealing with flaws and intentionally create flaws in my work. I’m not trying to make it perfect.”

The birth of the photograph in the United States is typically traced to the mid-19th century. This form of accurately capturing and reproducing a single moment in time seemed wondrous to those who witnessed these first images at a time when society could not fathom how they were possible.

The 19th century was also the time of the Enlightenment or Age of Reason a unique socio-cultural period when science philosophy and theology mixed. Taylor strives to maintain the relationship between the sacred and the secular the beautiful and the mundane.

“I apply a 19th-century mindset to the digital and the wet plate process; photographs are sacred and magical ” he says.

The enduring sense of the miraculous that Taylor references seems to be at the heart of photographic art production. It is also central to contemporary debates about photography’s place in the fine art community which examine the relationship between science and art and wonder precisely where the medium — particularly newer digital techniques — fits in.

For Mike Bryand a businessman turned fine-art photographer the technological potential of the photograph is what makes it so exciting to work with.

“The nice thing about the digital world is that you can really do anything ” he says.

Bryand who is self-taught began as a photojournalist covering sporting events and Indianapolis 500 races. His current practice is heavily focused on the Wilmington area and its iconic and meaningful places.

He shoots digitally and uses a variety of photo editing programs to manipulate the image’s raw data layering in colors and effects. He works with software the way an oil painter might work with a brush and palette knife.

The sweet spot Bryand says is “where the viewer can’t tell if it is a photograph or a painting.”

His work deals with emotion and he is devoted to encouraging positive feelings. One of his first downtown images featured a park bench on the Riverwalk. Many viewers told him they had their first date first kiss or even got engaged on that very bench. Another client looked through a bin of his photos and remarked “I have seen my whole childhood through these images.”

“I only do this when I’m happy ” he says. “I don’t know who said this first: �People never remember what you say but they always remember how you make them feel.'”

The first book illustrated with photographic images is often attributed to English botanist Anna Atkins whose father a scientist and scholar encouraged her to pursue both her scientific and artistic interests. He included her detailed engravings of shells in his translation of Lamarck’s “Genera of Shells” and introduced her to people like Sir John Herschel the inventor of the cyanotype photo process.

These formative experiences led Atkins to produce “Photographs of British Algae: Cyanotype Impressions ” published in 1843 in which she created photograms of algae specimens. The photogram is a process also used by Wilmington artist Melissa Wilgis who describes Atkins and her work as contributing to her interest in early methods of photography.

A photogram involves placing objects on light-sensitive paper. Light is then projected onto the paper in a darkroom setting. The paper changes color where the light hits it leaving behind an image of what was placed on top. The results can be further manipulated based on the tone of light and length of exposure.

“It’s a different way of looking at things that we see all the time but might not notice ” she says.

Wilgis also finds inspiration in vintage items. Many of her animal- and plant-life photograms which are done in black and white as well as a sepia tone that requires additional chemical application are combined with antique glass or frames to add borders and additional context for the central subject. These additions add a sense of nostalgia and the personal reminding the viewer of a keepsake or carefully selected collection.

This is apparent in her newer work as well which draws on vintage fabrics and worn clothing items. The contrasting tones produced from the dark room process reveal worn spots in fabric burn marks and tears and variation in threads.

She describes a recent experiment with a vintage slip.

“When you look closely you can see a cigarette burn and loose threads; someone’s done some real living in this thing ” she says. “The image is about texture pattern and tones. I like imperfections as much as the thing itself.”

Wilgis’ photograms invoke a sense of preciousness and intimacy. Each one seems to tell a story about the person who might own it and captures a unique feeling or thought.

She also creates what she calls “curiosity boxes ” which feature her photograms in salvaged drawers or frames surrounded by personal memorabilia. These are reminiscent of the cabinets of curiosity developed during the Renaissance and reinforce her commitment to history memory and the personal.

Critics can often agree on the artistic merits of historical photographic processes or digital practices that seem to align with older mediums. But the advent of new technologies clouds the question of modern photography’s place in art history.

For John Wilson in many ways the developing technologies parallel the development of painting.

Wilson’s works range from heavily abstracted to slightly manipulated. He draws on compositing — combining two or more images into one — and a variety of editing software to achieve the desired effect. Creating “stories without words ” abstracted shapes and spaces impressions of fleeting moments and portraits of human subjects in situ Wilson embraces the technology of photography as well as its foundational sense of mystery emotion and the magical.

German fashion designer Karl Lagerfeld famously said “What I like about photographs is that they capture a moment that’s gone forever impossible to reproduce.” In the history of painting this was also an important impulse; to preserve that which could not be maintained.

In the classical ages of art painters and sculptors strove for naturalism and realism. Moving into the modern era and the advent of styles like Cubism Impressionism and Abstract Expressionism there was a shift toward the reproduction of feeling over material reality.

This same parallel can be drawn in photography. The nature photography of Ansel Adams — particularly his black-and-white landscape work from the 1930s — and the documentary work of photojournalist Dorothea Lange who captured the plight of farmers and migrant workers during the Great Depression represent naturalism and realism. Today artists like Wilson are making their mark with abstract photos.

“I’m trying to take it a step further and leave the viewer with something more than what the camera captured ” Wilson says.

He also notes that many critics and historians tend to overlook the technical processes behind even those photos famously lauded for their “truthfulness” and “purity.” He points for example to Ansel Adams’ heavy manipulation of his works in the darkroom process.

Another Wilmington artist is taking this question on even more directly. Dorian Hill refers to her work as “iphoneography” because her images are created and edited using only her phone. While she prints her photographs onto aluminum and other surfaces she also enjoys the ability to share images immediately through social media and texting.

Hill’s images range in theme and tone from bright and cheerful settings full of luscious flora and fauna to brooding dark and ambiguous. Her perspective on art and technology is in the forefront of her art practice.

“New ways to capture alter and enhance images are constantly being developed along with printing technology advancements allowing artists to show their work in many new and unique ways on wood metal textiles etc. ” she says. “The vast selection and accessibility of creative editing apps has spawned a whole new art form along with iphoneography that I believe struggles to gain acceptance in the fine art world.”

Hill notes that while she uses an instrument that can encourage isolation she hopes her images will inspire viewers to expand their experience.

“I would like people to see the details the simplistic beauty found all around us if they just stop and take time to really look up out and around ” she says. “Pretty ironic when the same technology I use to capture this beauty keeps their heads down.”

Whether using old-fashioned tools like tintypes and darkrooms or advanced digital equipment and software photographers agree that the technological potential grants them a unique measure of freedom — freedom to be in the world more fully and consciously to explore almost forgotten aspects of history to express themselves to revel in the small details of life around them to share and spread their own joy and experiences.