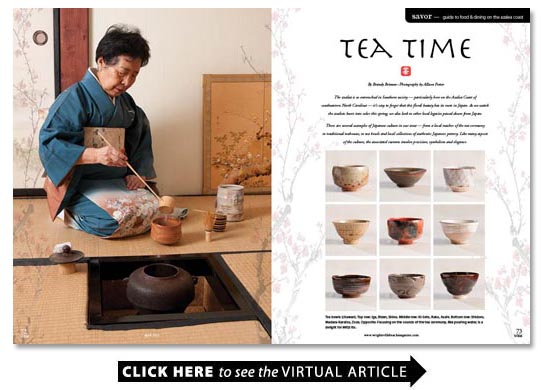 The azalea is so entrenched in Southern society particularly here on the Azalea Coast of southeastern North Carolina its easy to forget that this floral beauty has its roots in Japan. As we watch the azaleas burst into color this spring we also look to other local legacies passed down from Japan.

There are several examples of Japanese culture in our area from a local teacher of the tea ceremony to traditional teahouses to tea bowls and local collections of authentic Japanese pottery. Like many aspects of the culture the associated customs involve precision symbolism and elegance.

Perhaps no other eating or drinking ritual in the world requires the degree of precision and regulation as the formal Japanese tea ceremony. Mitzi Ito of Carolina Beach teaches classes on the rules of the tea ceremony.

I love the tea ceremony; thats why I still do that Ito says. What she loves in particular is listening for the sound of the water boiling the water pouring. Listen she says. In the silent room she pours the water into the bowl; the hot liquid glugs and hisses.

I just love that sound! she says eyes lighting up and laughing. I love this room she adds looking around at her space. She especially enjoys hosting an annual formal tea ceremony here for her friends.

Ito began her training when she was only seven years old. Her mother insisted she begin learning at an early age about the tea ceremony flower arranging (ikebana) and cooking the skills needed to land a good husband. Ito recalls how her friends would play outside while she was inside because not many girls started so young.

In her home Ito has a tearoom the size of six tatami mats which is how tearooms are measured. Hers is larger than a standard room to accommodate the classes she teaches.

There are two kinds of tea ceremonies: chakai a simple one during which sweets and tea are served and chaji a four-hour ritual that includes several courses of seasonal food called kaiseki. One must study for ten to 20 years to become an official tea master before presiding over a chaji. Though the rules are complex Ito says its really quite simple.

Its so easy but people think its hard. There are a lot of rules Ito says. She cites a famous tea poem by tea master Sen no Rikyū (1522-1591) which states The way of tea is just to boil water make tea and only drink it … this you should know.

Sounds simple but so much more is involved. Learning and memorizing the rules is the challenge. Every movement is regulated. The rules are vast not just for the host but for the guest how to sit how to bow when to speak how to show respect to the host and so on. The details of the ceremony change from month to month and in between seasons. Different food is served depending on the month; the calligraphy hanging on the wall must be changed; different flowers are required; and the bowls and pots vary depending on the season.

What doesnt change is the order of the ceremony. The host or teishu boils the water places the tea in the bowl pours water over the tea and whisks it before presenting it to the guests one at a time. A special type of tea is used a powder green tea called matchi. There are thousands of different kinds of tea some of which are very expensive. For more formal occasions the tea is served thick; for more casual ones it is served thin.

Local Japanese potter Hiroshi Sueyoshi who teaches at the Cameron Art Museums Pancoe Art Education Center studied the tea ceremony with a tea master. Participating in the ceremony he says he felt tranquility its one of the things that the tea ceremony is teaching you. Also respect for the equipment the bowls the tea the vase and the surroundings. Thats what struck me Sueyoshi says.

The movement in the ceremony is striking as well.

Everything relates one movement to another; its more like a dance he says. Its very hard because you have to memorize and at the same time move with elegance. Its graceful. He says its an art in which the senses are involved especially sight sound and taste.

Sometimes digging his own locally found blue clay Sueyoshi makes tea bowls in his studio which he says must be simple and comfortable to hold. The bowls for the tea ceremony represent the universe with the inside symbolizing the ocean and the rim representing the mountains. The rims of some bowls literally resemble the mountains with peaks worked into the shape while the rims of others are simply straight.

During the ceremony there are certain ways participants hold and look at the bowls.

Its respectful for the host to admire the bowls Sueyoshi says. A well-known potter in Japan who has mastered the art of making bowls for the tea ceremony may fetch up to $50 000 per bowl.

Hank Phillips a Landfall resident who worked in Japan in the late 1970s amassed an impressive collection of pottery.

I had a translator who had a small collection of sake cups and I became interested in Japanese pottery based on his descriptions of his cups Phillips says. On weekends they began visiting potters all over Japan from Okinawa to Hokkaido the countrys northernmost island.

I became obsessed with Japanese pottery after I saw the potters making pottery at their kilns Phillips says.

The potters typically use wood-fired kilns.

The type of clay along with the glaze resulted in varying styles.

Some came out of the fire with natural glaze; some have burned places and some scorched places he says.

Like the tea ceremony the style of pottery such as the tea bowls varies seasonally. Japanese potters produce hearty thick clay bowls for winter and thin pieces for summer. Phillips collection which includes a wide variety of different sizes colors shapes and textures is one of the largest authentic contemporary collections of Japanese pottery in the United States.

There are two traditional-style Japanese teahouses in southeastern North Carolina: one at Ashs Japanese Maple Nursery in Hampstead and the other at the New Hanover County Cooperative Extension Arboretum in Wilmington.

The Ash nursery teahouse was built by Thomas and Nancy Ash as a place for contemplation and relaxation. They welcome visitors to use the house for celebrations and solitude. Running water can be heard from inside the house which adds to the relaxing atmosphere.

Sueyoshi helped with the decorations of the house designing animal accents for the corners of the roof such as frogs and fish.

The teahouse itself is also art the way its built the way you enter he says.

Mark Weekley horticulture technician for the New Hanover County Cooperative Extension Arboretum helped spearhead the teahouse construction at that location during the redesign of the gardens.

It was part of the original concept to build an actual Japanese garden in here Weekley says.

The design plans were sent back and forth to Japan to ensure accuracy.

Usually a teahouse has a ceremonial purpose its very symbolic very structured Weekley says. Ours holds four mats. Its authentic.

The house was built by volunteer carpenters. Weekley says There are no nails; its all done with pegs mortis and tendon.

And while there are the occasional ceremonies or events in the gardens its mostly used for the enjoyment of families and the delight of children.

The gardens surrounding the New Hanover County Cooperative Extension Arboretum teahouse are designed in the traditional Japanese style which recreates the outside world in miniature form. In Japan particularly within more urban cities people design gardens in their courtyards to recreate a scene or a miniature version of what their home was like says garden designer and horticulturist Mark Weekley.

In the gardens of the arboretum the trees represent the mountains holly represents the foothills and the shrubs represent snow. The flowers were designed to have different bloom times so that it looks like snow melting down the mountains.

Ive had a love of Japanese gardens for a long time and Ive read and studied on them forever Weekley says.

This garden is a study in green so that theres still texture and interest even when there are no flowers blooming. The two major plants are azaleas and Japanese maples along with lots of other plants native to Japan such as pittosporum.

The gardens are very manicured. When caring for the garden Weekley says You cant help but get lost in your thoughts when youre taking care of it because its very focused. Its almost a meditative type of thing.