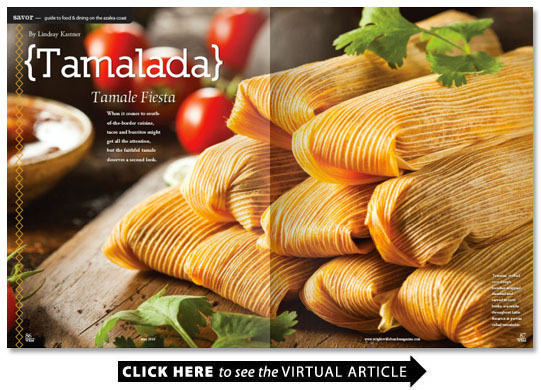 When it comes to south-of-the-border cuisine tacos and burritos might get all the attention but the faithful tamale deserves a second look.

Tamales are little steamed bundles of simple corn dough typically wrapped and served in corn husks. They can be flavored with everything from pork to pineapple and are suitable for eating at any time of day. Complete with their own biodegradable wrapper they make a perfect hand-held food.

More than just tasty and convenient tamales are an ancient food. They have been around for thousands of years and are thought to have been invented by the Aztecs who Smithsonian Magazine states needed a portable food that could be carried into battle.

The first tamales were cooked over hot embers in an earthen pit. Steaming them didn’t become the norm until after the Spanish arrived in the New World with pots and pans.

These days tamales are popular throughout Latin America especially around Christmas and other celebrations and on Cinco de Mayo in Mexico when the country celebrates the victory over the French at the Battle of Puebla on May 5 1862. Friends and family gather to make them by the dozens assembly-line style at parties called tamaladas.

Delfina Urena owner of La Guera restaurant on Gordon Road in Wilmington hails from the Mexican state of Guerrero where she said small tamales wrapped in corn husks are the norm.

Customers at La Guera can choose between tamales made with pork or with chicken and served with either red or green sauce. A third option served with mole comes wrapped in banana leaves.

“The banana tastes different and it’s good with the mole sauce ” Urena says. “With the corn (the mole) doesn’t taste good.”

Urena makes her tamales in small batches just one or two dozen at a time. For the chicken tamales she uses only boneless breast meat but notes that large tamales with bone-in chicken are popular in certain parts of Mexico such as Veracruz.

In Guatemala tamales might include tomatoes. In Cuba they’re flavored with pork. Even the Mississippi Delta has its own take on the dish filling the dough with heavily spiced meat.

In Mexico sweet tamales often make an appearance at Christmas time when they are loaded with plump raisins pineapple and perhaps coconut. Urena sometimes adds coconut milk and a bit of red food coloring to hers which she makes for family but does not sell.

“Now at Christmas my daughter and her friend come here and help me to make tamales for us ” Urena says.

She pairs them with the customary accompaniments of champurrado (thick hot chocolate) and arroz con leche (rice pudding).

”The ones I like in September are corn sugar and butter and nothing else ” says Fernando Galindo an employee at La Costa restaurant on Market Street in Porters Neck.

Whether sweet or savory the key to good tamales is in the preparation of the masa a dough made from corn that has been treated with lime in a process called nixtamalization.

Nixtamalization is an ancient method that makes corn easier to digest while upping its nutritional value. Whole kernels of nixtamalized corn are known as hominy or posole. When ground they become masa the basis of tamales.

To make tamales fat is whipped into the masa until it is pale and fluffy. Lard is traditional but vegetable shortening makes for a perfectly acceptable vegetarian alternative. Butter also has its place especially in fresh corn tamales.

Traditionalists tend to favor tamales made with fresh masa but they can also be made with masa harina a traditional Mexican flour that resembles corn meal and is made from treated corn that was dried before being ground. Masa harina is typically easier to find than its fresh counterpart and makes a good starting point for the novice tamale maker.

Some recipes call for adding baking powder to the dough but others attest that no added leavening is necessary as long as the masa is well beaten.

In her book “From My Mexican Kitchen: Techniques and Ingredients ” expert Diana Kennedy recommends testing masa by dropping a spoonful into a glass of water. If it floats it is ready if it sinks beat a while longer.

Meanwhile soak the corn husk wrappers until they are nice and pliable. Urena soaks hers for about one hour.

When the masa is ready spread a thin layer onto the wrapper (it will expand during cooking). Then top with desired fillings such as meat or beans fold into a little bundle and steam.

“Mole is a lot of work ” she says. “The green sauce or red sauce is much easier.”

Cooking time depends on the size of the batch.

“The way you know when tamales are done you check the center of the tamales and check that the dough is cooked ” Galindo says adding that fully cooked masa will become somewhat darker in color. “It has to fall out of the husk ” he says. “That means it is already cooked. If the dough is stuck on the corn husk that means it is not really ready.”

Making tamales is labor intensive so enlist a few friends to share the work — and the rewards.

Bring the chicken garlic and onion to a boil in plenty of water. When the chicken is cooked through shred and save the broth for the masa.

Mix the masa chicken broth baking powder lard (or shortening) together in a large mixer at high speed adding water as needed. The consistency of the masa should be very soft.

chicken bouillon or salt as needed

Bring the tomatillos and jalape�os to boil in a large pot of water. Strain and place in a large blender along with about 5 cups of the water used for boiling. Add the garlic onion cilantro and salt and blend well. Transfer the salsa to a large saucepan with the vegetable oil and bring to a boil until the salsa is reaches the desired consistency neither too thick nor too thin. Mix the shredded chicken into the salsa.

To assemble the tamales:

Clean two packages of corn husks removing any silk on the husks. Soak the husks in warm water for about 30 minutes or until pliable. Take two husks and place them one on top of the other with the pointed ends facing outward. Put 2 tablespoons of the masa in the middle and spread upward. Top with the chicken and more green sauce if desired. Fold together and place in a steamer pot. When the water in the bottom of the pot boils lower the heat to medium and steam the tamales for about 1.5-2 hours.