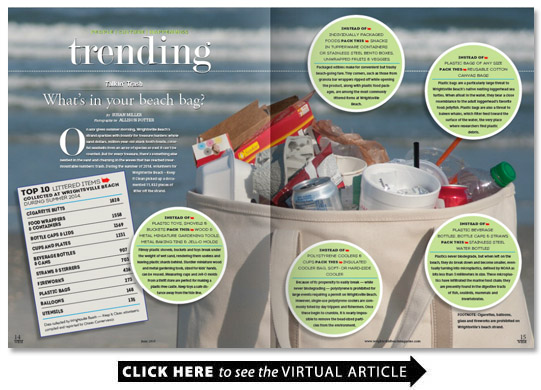 On any given summer morning Wrightsville Beach’s strand sparkles with bounty for treasure hunters: whole sand dollars million-year-old shark tooth fossils colorful seashells from an array of species so vast it can’t be counted. But for every treasure there’s something else nestled in the sand and churning in the waves that has reached insurmountable numbers: trash. During the summer of 2014 volunteers for Wrightsville Beach Keep It Clean picked up a documented 11 833 pieces of litter off the strand.

Instead of Plastic toys shovels & buckets

Flimsy plastic shovels buckets and toys break under the weight of wet sand rendering them useless and leaving plastic shards behind. Sturdier miniature wood and metal gardening tools sized for kids’ hands can be reused. Measuring cups and Jell-O molds from a thrift store are perfect for making a plastic-free castle. Keep toys a safe distance away from the tide line.

Instead of Individually packaged foods

Packaged edibles make for convenient but trashy beach-going fare. Tiny corners such as those from granola bar wrappers ripped off while opening the product along with plastic food packages are among the most commonly littered items at Wrightsville Beach.

Instead of Plastic bags of any size

Plastics never biodegrade but when left on the beach they do break down and become smaller eventually turning into microplastics defined by NOAA as bits less than 5 millimeters in size. These microplastics have infiltrated the marine food chain; they are presently found in the digestive tracts of fish seabirds mammals and invertebrates.

Instead of Polystyrene coolers & cups

Because of its propensity to easily break — while never biodegrading — polystyrene is prohibited for large events requiring a permit on Wrightsville Beach. However single-use polystyrene coolers are commonly toted by day trippers and fishermen. Once these begin to crumble it is nearly impossible to remove the bead-sized particles from the environment.