Take Ten: 10 Things You Should Know About The Cape Fear Museum of History and Science 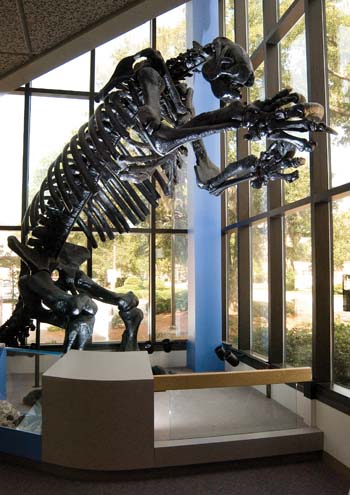 A replica of a giant ground sloth greets you at the front. (Thats it over there.) It is 15-20 feet tall standing upright on its hind legs. It is an herbivore that went extinct 10 000 years ago but lived up to 1.5 million years ago. Casts of its bones are on display. The original bones safe and sound in Raleigh were found in our backyard off Randall Parkway when the road was under construction in 1991.

Bet you didnt know that. And if you did we know where you learned it.

New or native to the Port City its time to get connected (or most likely reconnected) to the Cape Fear Museum of History and Science (841 Market Street 910-798-4370) a Wilmington icon for generations. But before you head for the door here are ten more cool things that are fun to know before you go.

There has always been tension between the idea of preserving and restoring historical objects. The Cape Fear Museum of History and Science believes that every object has a story attached to it. Therefore the museum works to preserve its collections in their original state. As public relations specialist Jacob Rudolph explains the idea behind the museum is to “find ways for people to relate to objects” through the tales and sentiments those items convey. When speaking about a rusting saw on display for example Rudolph points out “that rust is part of the uniqueness of the object.” Everything down to the sweat marks on Michael Jordans gym bag is safely protected so that the stories will live on.

Ever make fun of the clothing your parents wore when they were your age? Seeing how clothes and fashion change over time is one of the most interesting and fun ways to view history. However textiles can be some of the hardest items to exhibit because they fade stretch and alter easily. The museum takes extreme precautions to ensure that their historical fabrics are preserved to the best of their ability. Motion-censored lights are used to illuminate exhibits only when approached and some historical uniforms are rotated out of display every six months to ensure their protection. During their time off display textiles are stored in acid-free boxes in humidity and temperature controlled environments. 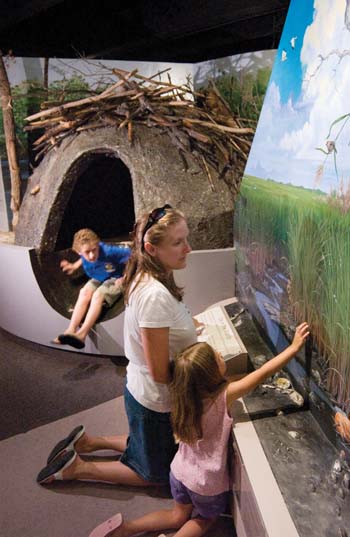 3. Countless Collections
The museum collections are made up of more than 50 000 items related to the lower Cape Fear Region defined as a 50-mile radius around Wilmington. Of that 50 000 only three to seven percent is actually on display. As Rudolph explains “Museums are a balance between being exhibitors and caretakers.” The items not displayed are stored on-site in a secure and protected environment.

Remember going to museums as a child and being scolded by tour guides to “Keep your hands to yourself!” Not exactly the most fun way to learn was it? The museum promotes interactive education. Throughout the museum look for blue panels to signify when its time to get your hands on some fun. Feel the consistency of tree resin or give your nose a chance to smell turpentine. Everywhere you turn this museum encourages people of all ages to play and learn.

5. Can I help you?
When the museum first opened in 1898 it was housed in one room and run completely by volunteers. Although now the museum is staffed by highly educated and trained professionals much help is still provided by volunteers throughout the lower Cape Fear Region community. At any point in time the museum receives the help of more than 100 volunteers from interns to educators to store operators. Last year volunteers clocked more than 5 000 hours to help support the museum. 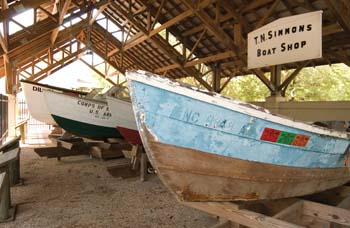 6. Sea Skiff
T.N. Simmons a boat maker from Myrtle Grove North Carolina was famous for his construction of the Simmons Sea Skiff a sturdy 14- to 25-foot craft known for its seaworthiness. These extremely popular boats were built until the early 1970s when production abruptly stopped after the death of Simmons son. While the museum is the proud owner of multiple models of Sea Skiffs it is also the only source of design plans for three different lengths of the boat. Simmons himself did not keep plans for his models. After receiving permission to start the project a museum volunteer an engineer by trade deconstructed a Simmons Sea Skiff into its various parts and rebuilt the craft recording its design as he went. In total three boats were taken apart and reconstructed for design. Today the museum has sold more than 2 000 copies of designs to nations around the globe.


7. Reach for the Stars!
You can investigate the night skies in the middle of the day with the museums portable planetarium. Every third Sunday of the month features a new theme and three opportunities for the entire family to crawl literally under the stars and learn some exciting celestial essentials. Free with museum admission this activity is always a stellar time.

Visiting a museum is all about education and many museum visitors are school-aged children. But when students cannot get to the museum the museum brings the learning to them. One way the museum does this is through their Education Outreach program where museum professionals visit classrooms to provide interactive hands-on learning experiences for students. These sessions are themed and vary from underwater archaeology to weather. Another way the museum offers outside education is through its museum kits. Teachers can rent a themed kit filled with materials to aid in lesson planning within their own classrooms.

The Cape Fear Museum of History and Science is the oldest operating museum in North Carolina. Founded in 1898 the museum building was originally the Wilmington Light Infantry Armory the old shooting range in the basement is now used for storage. During World War I the museums collection moved to Raleigh to ensure its protection. When the war was over it took almost a decade to reclaim the entirety of the museums belongings. New Hanover County began funding a portion of the museums operations in the 1960s and finally took administrative control in 1977.

Although many of the museums favorite exhibits are ongoing the museum has two areas devoted solely for new and exciting changing exhibits. These spaces house fun interactive displays on a wide range of topics from old-time toys to ancient Carolinians. Though the time that changing exhibits remain at the museum vary at least two temporary displays visit the museum per year giving all of us a great reason to keep coming back.