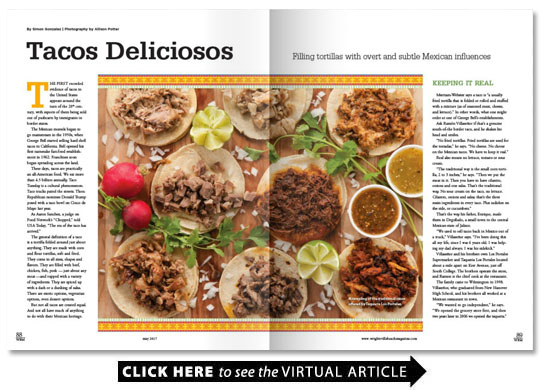 The first recorded evidence of tacos in the United States appears around the turn of the 20th century with reports of them being sold out of pushcarts by immigrants in border states.

As Aaron Sanchez a judge on Food Network’s “Chopped ” told USA Today “The era of the taco has arrived.”

The general definition of a taco is a tortilla folded around just about anything. They are made with corn and flour tortillas soft and fried. They come in all sizes shapes and flavors. They are filled with beef chicken fish pork — just about any meat –and topped with a variety of ingredients. They are spiced up with a dash or a dunking of salsa. There are exotic options vegetarian options even dessert options.

But not all tacos are created equal. And not all have much of anything to do with their Mexican heritage.

Merriam-Webster says a taco is “a usually fried tortilla that is folded or rolled and stuffed with a mixture (as of seasoned meat cheese and lettuce).” In other words what one might order at one of George Bell’s establishments.

Ask Ramon Villasenor if that’s a genuine south-of-the border taco and he shakes his head and smiles.

“No fried tortillas. Fried tortillas are used for the tostadas ” he says. “No cheese. No cheese on the Mexican tacos. We have to keep it real.”

That’s the way his father Enrique made them in Degollado a small town in the central Mexican state of Jalisco.

“We used to sell tacos back in Mexico out of a truck ” Villasenor says. “I’ve been doing this all my life since I was 6 years old. I was helping my dad always. I was his sidekick.”

Villasenor and his brothers own Los Portales Supermarket and Taqueria Los Portales located about a mile apart on Kerr Avenue just off South College. The brothers operate the store and Ramon is the chief cook at the restaurant.

The family came to Wilmington in 1998. Villasenor who graduated from New Hanover High School and his brothers all worked at a Mexican restaurant in town.

“We wanted to go independent ” he says. “We opened the grocery store first and then two years later in 2006 we opened the taqueria.”

Taqueria is synonymous with authentic. The tacos served here are made the way they do it back in the home country.

Some are familiar to anyone who eats at a typical Mexican restaurant. Asada carnitas pastor chorizo made with steak pork and sausage.

Others have exotic unfamiliar names like buche cachete lengua tripa chicharron and cueritos and are filled with meat choices unfamiliar to American appetites — beef stomach cheek tongue and intestine and pork belly and skin.

“We don’t have anything here with ground beef ” Villasenor says. “Chicharron the pork belly those are my favorite ones. They are really good. They’re meant to be eaten with green salsa.”

Taquerias in Mexico typically serve inexpensive food in working-class neighborhoods. The meat choices date to a time when nothing went to waste; everything was used when an animal was slaughtered. At Taqueria Los Portales the meat is cooked on a hot flat grill then put inside a tortilla that’s freshly made at the nearby store. The fillings are added at a bar with beans radishes cucumbers cilantro onions and five types of salsa all made with “my dad’s salsa recipes ” VillaVillasenor says.

The choice of salsa is important to enhance the flavor of the meat. Green salsa is for beef tongue and cheek. Salsa de arbol is for steak tripa and carnitas. Chipotle sauce is for pork tacos. Most have a decided kick especially the salsa de arbol made with a particularly potent chili pepper.

The taqueria is a place when Spanish is the primary language. Villasenor says most of the customers are from Mexico.

“And we have people from Honduras El Salvador Guatemala ” he says.

When the doors opened in 2006 that described almost the entire customer base but Americans now make up about 30 percent of the patrons.

The menu has evolved to include items for American tastes. There are burritos made with flour tortillas and even a combination plate with a couple of hard shell tacos.

Just don’t expect them to be filled with ground beef or topped with cheese. That wouldn’t be keeping it real.

Catch of the Day

Josh Vach was working long hours at a restaurant in Southern California back in the ’80s. When he and his friends needed to get away they’d head down south to around Ensenada Mexico.

“We went surfing in Mexico so we couldn’t get called back in ” he says. “Part of the routine was surfing a whole bunch and then going to these surf shacks selling fish tacos. When you are surfing you are so worn out and hungry. They were relatively cheap. You’d load them up with onions and hot sauces. It was an unbelievable fulfilling experience after a hard day of surfing.”

Fish tacos had made it across the border and were popular in Southern Cal. Vach remembers tasty ones at a restaurant in San Diego called the Brigantine.

In 1993 the University of North Carolina Wilmington graduate moved back to the Carolina coast to open a new restaurant called K38; in 2001 he added Tower 7 in Wrightsville Beach.

“We wanted to be the first to bring back fish tacos to the East Coast ” he says. “The inspiration was Southern California surf culture and cuisine.”

Fish tacos have been a staple in coastal regions of Mexicofor as long as there has been fish and tortillas — hundreds of years. But Ensenada claims to be the birthplace of today’s typical dish consisting of small pieces of batter-coated fried fish in a hot corn or wheat tortilla. They’ve been making them that way since at least 1958.

“The Baja Fish is the most popular item on our menu ” Vach says. “The shaved cabbage is traditional in Mexico along with fresh squeezes of lime. We serve it with a garlic chili sauce called California chili. It’s standard protocol to give the house picante and California chili as accompaniments. There’s lots of layers of flavor. There’s so much going on.”

The Baja and the San Felipe — a variation from the eastern side of the Baja peninsula with avocado green cabbage and different sauces — have their roots directly in Mexico. The restaurant also offers versions with tuna shrimp grouper mahi and tilapia with the fish grilled or blackened in addition to fried.

“The inspiration for the tacos comes from the types of fish and the quality of the fish we have available ” Vach says. “We try to get all the seafood locally. We get it fresh from Motts Channel every day.”

The star of the show is the rib meat which isn’t likely to be found in the offerings at an authentic taqueria.

“To prepare the short ribs is about a four-hour process ” says executive chef Tiffany Eslien. “We sear them then cook them down with red wine and beef stock until they are nice and tender.”

But although Hops calls itself an American gastropub Eslien’s tacos aren’t just for U.S. appetites. Look past the meat and the Mexican influences are soon apparent.

It starts with the tortilla. The tacos are big and overstuffed. It might make sense to use larger flour tortillas for the overstuffed tacos but Eslien stuck with corn.

“It is a very messy taco ” she says. “At one point we had the flour tortillas but I wanted to make it more authentic.”

The black bean corn salsa and slaw made with jicama — sometimes called the Mexican turnip — also harken to the Latino roots. The toppings also include radish an intentional nod to the taqueria-style offerings.

Even the meat is a tribute to the tacos Eslien sampled on a trip to Mexico.

“The beef is really tender juicy and taco-like ” she says. “It reminds me of the tongue.”

Eslien created the tacos as an offshoot of the restaurant’s barbecue braised short rib nachos.

“We wanted a menu that was appealing to everybody ” she says. “We have braised short rib tostada nachos. Why don’t we do a taco with the different toppings? I didn’t think it was going to be a big seller but it has become very popular.”