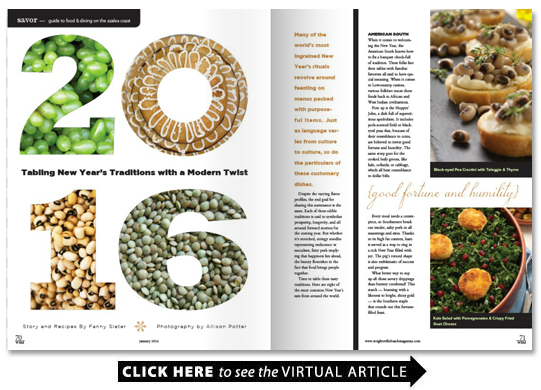 Many of the world’s most ingrained New Year’s rituals revolve around feasting on menus packed with purposeful items. Just as language varies from culture to culture so do the particulars of these customary dishes.

Despite the varying flavor profiles the end goal for sharing this sustenance is the same. Each of these edible traditions is said to symbolize prosperity longevity and all around forward motion for the coming year. But whether it’s stretched stringy noodles representing endurance or succulent fatty pork implying that happiness lies ahead the beauty flourishes in the fact that food brings people together.

Time to table these tasty traditions. Here are eight of the most common New Year’s eats from around the world.

When it comes to welcoming the New Year the American South knows how to fix a banquet chock-full of tradition. These folks line their tables with familiar favorites all said to have special meaning. When it comes to Lowcountry cuisine various folklore traces these foods back to African and West Indian civilizations.

First up is the Hoppin’ John a dish full of superstitious symbolism. It includes pork-scented field or black-eyed peas that because of their resemblance to coins are believed to invite good fortune and humility. The same story goes for the cooked leafy greens like kale collards or cabbage which all bear resemblance to dollar bills.

Every meal needs a centerpiece so Southerners break out tender salty pork in all seasonings and sizes. Thanks to its high fat content ham is served as a way to ring in a rich New Year filled with joy. The pig’s rotund shape is also emblematic of success and progress.

What better way to sop up all those savory drippings than buttery cornbread? This starch — beaming with a likeness to bright shiny gold — is the Southern staple that rounds out this fortune-filled feast.

In Spain la Vispera de A?o Nuevo (New Year’s Eve) celebrations come to a close with a quick round of midnight grapes. Emphasis on “quick” as one of 12 grapes is popped into the mouth following each stroke as the clock tolls midnight. This ceremonial custom has been in place for well over 100 years and began as a way for winemakers in the Alicante region to use up excess grapes.

Just as Americans gather in Times Square Spaniards head to Puerta del Sol in Madrid gathering at the front of the clock tower to anxiously await midnight’s chime. Grapes are recognized as a forecast of the year to come and each individual round signifies a good month. Pros recommend pre-seeding and peeling the grapes for easier one-per-second chowing. But be mindful of which grapes present a bitter flavor. Sour bites stand for sour months.

La Festa di San Silvestro is how Italy brings in the New Year with a bang. The celebration that takes place at Piazza del Popolo in Rome includes fireworks but as with most Italian get-togethers food steals the starring role. Lentils — which have been eaten since the Roman times — are the focal point. An abundance of these miniature seeds signifies an excess of riches for the upcoming year. The legumes are often paired with a cotechino a large spiced sausage or a zampone a dried and cured stuffed pig’s trotter with spicy ground up pork — which Italians like Southerners believe predicts a fruitful year ahead.

In Japanese households families customarily honor the current year’s passing by devouring a big bowl of buckwheat noodles as the clock strikes 12. But the midnight snack should be slurped with caution. Breaking the noodles is considered bad juju. In this practice which dates back to the 17th century each strand symbolizes an extensive prosperous life so the lengthier the better. As the Japanese honor this occasion one mouthful at a time they refer to this dish as toshikoshi-udon which means “from one year to another.”

In many regions reveling in the New Year with ring-shaped foods represents coming full circle. The Dutch nosh on donuts while in Denmark and Norway kransekage is the creation of choice. This decorated wreath cake is composed of marzipan a sweet confection made with almond meal and layered in concentric rings.

Though not always in circular form a handful of other cultures also celebrate with cake. However it’s what’s on the inside that counts with hidden treasures being a routine holiday habit. The Greeks stick surprises in their scrumptious coffee-scented Vasilopita and the French in their rich creamy gateau. Mexicans tuck trinkets in their fruit-dotted Rosca de Reyes and Bulgarians in their flaky banitsa. Whoever discovers the buried knick-knack (typically a gold coin or plastic figurine) is said to merit a flourishing fate.

No matter what is used to welcome the New Year whether it’s chomping Hoppin’ John or sifting for surprises in layers of pastry the real purpose is to rejoice in life love and tasty traditions that bring everyone to the table.

Preheat the oven to 400 degrees.

Spread out the baguette slices on a baking sheet drizzle them with 2 Tbsp olive oil and season with salt and pepper. Bake until lightly golden brown 6 to 8 minutes.

Spread each toasted crostini round with taleggio and arrange on a platter. Top with the black-eyed peas drizzle the platter with the remaining 1 Tbsp olive oil and garnish with the thyme.

Serves 4 as a side dish

2 Tbsp neutral oil (such as vegetable or sunflower)

In a large bowl add the kale 1 Tbsp of the olive oil and a pinch of salt. Gently rub the kale between your fingers massaging until the leaves are tender about 2 minutes. Add the cornbread croutons to the bowl. In a separate small bowl whisk together the fresh orange juice honey white balsamic and remaining olive oil. Season to taste with salt and pepper. Several tablespoons at a time pour the dressing over the salad tossing to combine until coated. Divide the salad among four plates and top with the pomegranate seeds.

Arrange three shallow bowls from left to right the first with the flour the second with the eggs and the third with the panko. Set up a clean plate at the end. Dredge the chilled goat cheese rounds in the flour then in the egg and then in the bread crumbs. Set the panko-crusted rounds on the plate.

In a large skillet heat the neutral oil over medium heat. Fry the goat cheese rounds until golden brown 1 to 2 minutes per side. Transfer the rounds to a paper-towel lined plate and immediately sprinkle with salt. Divide the warm goat cheese rounds over the salads and garnish with additional cracked black pepper.

In a large bowl mix together the cornmeal flour salt baking powder baking soda and cayenne pepper. In a separate bowl whisk together the buttermilk milk eggs honey rosemary and melted butter. Slowly incorporate the dry ingredients into the wet. Pour the mixture into the baking dish and bake until golden 20 to 25 minutes.

Once the cornbread has cooled completely cut into 1/2-inch thick cubes. Toss the cubes with the olive oil and season with salt and pepper. Spread the cubes onto a baking sheet and bake tossing once halfway through until the croutons are deep golden brown and toasted 14 to 16 minutes.

Tip: For crunchier croutons make the cornbread several days in advance so it has a chance to harden.

1 cup milk warmed on the stove

Preheat the oven to 400 degrees. On a rimmed baking sheet toss the tomatoes with 1 Tbsp of the olive oil and season generously with salt and pepper. Roast until the tomatoes darken and begin to burst 15 to 20 minutes.

In a heavy-bottomed saucepan melt the butter over medium heat. Add the flour and stir until it’s completely incorporated with the butter about 3 minutes. Whisking as you pour slowly add the warm milk. Whisk constantly until the sauce thickens 6 to 8 minutes. Add a pinch of nutmeg and season to taste with salt and pepper.

Using a round cookie cutter or glass cut out 2 ? inch rounds of puff pastry. Poke several holes in the dough with a fork and lightly brush the outer border of each round with the egg. Top the center of each round with a spoonful of b?chamel a folded slice of ham gruyere and a sprinkle of salt and pepper.

Bake until golden and puffy 15 to 20 minutes. Garnish each round with a scoop of roasted tomatoes a drizzle of olive oil and several snipped basil leaves.