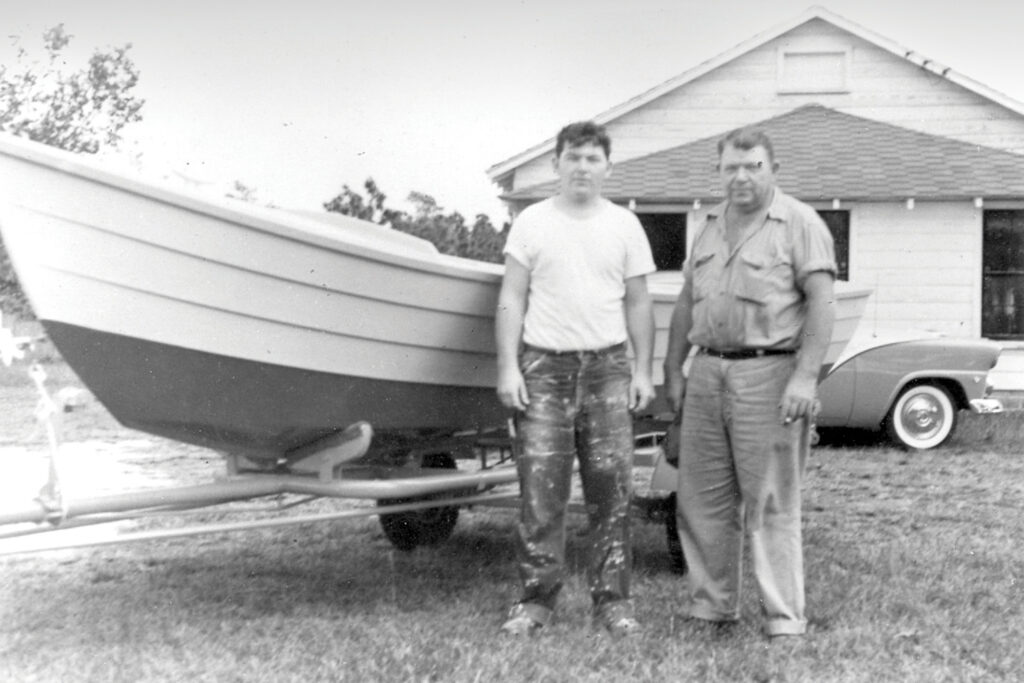 Originally published in the October 2004 issue of Wrightsville Beach Magazine.

It has been five decades  since custom boat builder T.N. Simmons of Myrtle Grove Sound completed his last boat.

He was not a boat builder by profession; he never set out to be one and his methods were highly untraditional. Like his father before him, he was a carpenter. But when a neighbor asked if he could build a lightweight boat to use for fishing in the surf, he gave his often-repeated reply: “If it’s made of wood, I can build it.”

The result was a masterpiece. Light and easy to handle, it is in worldwide demand for its clean lines and seaworthiness.

The boat was often called a dory even though it does not have the classic double end of a dory. Rather, it featured a high bow and forward of the transom a well for an outboard engine, as well as a distinctive rake to the transom.

This simple yet ingenious craft was responsible for opening up offshore sport fishing to outboard boats, which made the sport affordable to the average man and earned its place in North Carolina’s maritime history.

Born in 1908, Tom Simmons, also known as T.N. or Sims, lived almost his entire life on Myrtle Grove Sound. Although he dropped out of school around the sixth grade, his daughter Ann Mincy says her dad “was one of the smartest people I’ve ever known. He just had an inborn talent. He didn’t leave anything to chance; he knew whether or not something would work before he put it in the boat.”

He spent a few years of his youth near the mouth of the Chesapeake Bay before returning home to become a carpenter. He married Margarite Sutherland in 1927, and the couple had two children, Ann and T.N. Jr.

His first boat was a flat-bottomed 16-foot poling skiff, built for the shallow sound waters in 1932. The next year he was hired by Dow Chemical to help construct the new plant in Kure Beach. After the building was completed, he stayed on as part of the maintenance crew until 1943, when he applied for a job at the Wilmington shipyard as a pattern maker. There, he helped to produce Liberty ships during World War II. Although not a professional pattern maker, he told one interviewer, “If it’s made of wood, I can make what you want.”

After the war ended, he packed up his tools and returned to his small shop and home at Myrtle Grove Sound, planning, the story goes, on a career of building furniture and cabinets. However, for reasons known only to him, he placed a 12-foot flat-bottomed skiff in front of his shop.

That random act changed his life for the next 30 years.

He soon started taking requests from lake anglers in the Piedmont region who often drove a 400-mile round trip to pick up their boats. Simmons’s reputation as a custom boat builder began to grow.

A neighbor and fisherman, 22-year-old Norman Piner, stopped by Simmons’s shop one day in 1946 and tried to describe a boat to him.

“I asked him if he’d build me a boat to haul seine [nets] in off the beach,” he recalls. “I knew he could do it. I’d been knowing him all of my life. He was the same age as my dad. He was the best I’d ever heard of — he could build anything out of wood.”

Piner says he took Simmons to an area of marsh, about where Bluewater Grill is now, where sat a half-submerged, ramshackle New England dory. He asked Simmons to build a boat something like it from the bow back to midship, keeping the back wide enough to accommodate 300 yards of fishing nets. Piner also wanted a high transom so waves wouldn’t break over it. Fishing for Virginia mullet migrating down the coast in the fall, the heavy double-ended surfboat he was using often filled with water when returning to the beach.

“He got down with his ruler and measured it and looked at it,” Piner remembers. “He didn’t take no notes.”

Simmons’s imagination went to work, and the first Simmons Sea Skiff was born.

“He built it in nothing flat. I furnished the wood, and paid him around $200,” Piner said. “I still think I got a pretty good bargain.”

Piner recalls that he cut 13 juniper trees from a river swamp using a crosscut saw, hauled the logs out with a mule, and at a local sawmill made the lightweight boards Simmons used for the 18-foot boat’s construction.

Remarkably, Simmons built all of his boats without the benefit of plans. They were also built without glue or caulking compound, yet the joinery was flawless.

“A master ain’t been born to equal Simmons when it comes to woodwork,” Piner says of his old friend. “He was such a master, he could spit it out!”

Piner was delighted with his boat. “Everybody liked it,” he exclaims. “It was an invention in the boating world!” It was easy to operate, could be launched single- handedly into the surf and was adaptable in the river, marsh or ocean. Piner said it bounced up and down like a feather in the waves. “This boat would sit there and dance,” Piner declares. “No water would get in it.”

Piner says he bought four Simmons boats, ranging from 18- to 20-feet. “I’m a seaman,” he says proudly. “I’ve had a lot of adventure in that ocean.”

When outboard motors were introduced, Simmons added the motor well, which was a primary change from the original rowing design.

When Piner moved to Newport News in 1952, he often went to Hatteras on the weekend to fish offshore. Since his 20-foot skiff would only hold 20 gallons of gas, not enough for a round trip, he asked a friend who owned a 45-foot party boat to pull him out there “in what they called the blue water. I’ve caught a big 60-pound tuna in it. I had a little CB radio in those days. I’d hear the big boats saying, ‘How did he get out there in that little boat?’ If you could stay in it, it would bring you back home.”

Kenneth Sprunt retells how he was partly responsible for one of the design changes. He says the ride was unpleasant when trying to make speed. “The first ones had a flat bottom, and when it went over the waves – bam, bam, bam! It was a rough ride.”

Sprunt and his friend Julian Taylor made some suggestions and the flat bottom was replaced with a modified v-shaped bottom, diminishing the pounding when being driven over rough seas and reducing drag at top speeds.

Sprunt, who owned at least two of the skiffs, liked their design and flare, the way the spray of the water was thrown to the sides. “I liked the way they felt coming through the water,” he says. “It kept you real dry and comfortable.”

T.N. Jr. joined the business after graduating from high school in 1953. Four more employees were hired. The small crew could produce an average of one skiff per week, yet the waiting list for a new boat was long. Customers frequently waited over a year for their name to come up on the list.

Ann recalls, “It didn’t matter who you were. If you were on the list, you waited your turn. He wasn’t impressed by people who had a lot of money. When your name came up, you got the boat, not before.”

In 1966, at the height of the business, a low-sided 20-footer with no extras sold for $570. The 18- to 20-foot skiffs were so popular that the Jacksonville, Savannah and Wilmington districts of the U.S. Army Corps of Engineers were all using them.

Simmons turned down many offers to start up a factory.

“He didn’t want to do that,” says Piner. “He was a character. If he wanted to do it, he’d do it. If he didn’t, he didn’t let anybody tell him how to do anything.”

From 1950 to 1972, T.N. Simmons Boat Shop filled the ever- increasing orders as fast as they could in the tiny, meticulously organized shop.

Ann says her dad was an outgoing, hardworking man, free with his knowledge and fair. “And he was honest,” she says proudly. “Very, very, very honest. He always told you exactly what he thought.”

Sadly, in 1972, T. N. Simmons Jr. died falling out of a Simmons Sea Skiff while out boating alone. Dave Carnell, the leading authority on Simmons boats, said, “Simmons told me they had 19 years working together, and he lost heart for building boats.”

The Simmons boat shop closed after the orders he already had were completed. On the last invoice was inscribed the words: “Last boat built in the Simmons shop.”

But the story doesn’t end there. Simmons actually made three more boats after that: two made-to-scale, exact models (one for his daughter and the second for the Maritime Museum in Beaufort) and a small flat-bottomed “sound skiff” for his granddaughter, Gale Lewis.

Today’s boat builders simply cannot build a boat exactly the way Simmons did, Carnell says. Without Simmons’ inborn knowledge and experience, it is virtually impossible to reproduce one in the same way, but it is possible using a more conventional building method with the plans, detailed drawings and building description that Carnell has painstakingly reproduced.

Three decades later, the Simmons Sea Skiff is a fascinating phenomenon. No one knows the exact number of boats Simmons made; it is estimated to be around a thousand. The few surviving skiffs have become collector’s items and interest in the sturdy boats has kept T.N. Simmons’ name and ideas alive.