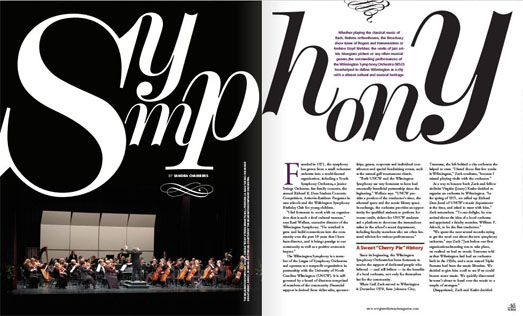 Whether playing the classical music of Bach Brahms or Beethoven the Broadway show tunes of Rogers and Hammerstein or Andrew Lloyd Webber the works of jazz artists bluegrass pickers or any other musical genres the outstanding performances of the Wilmington Symphony Orchestra (WSO) have helped to define Wilmington as a city with a vibrant cultural and musical heritage.

Founded in 1971 the symphony has grown from a small volunteer orchestra into a multi-faceted organization including a Youth Symphony Orchestra a Junior Strings Orchestra free family concerts the annual Richard R. Deas Student Concerto Competition Artist-in-Resident Programs in area schools and the Wilmington Symphony Birthday Club for young children.

“I feel fortunate to work with an organization that is such a local cultural treasure ” says Reed Wallace executive director of the Wilmington Symphony. “Ive watched it grow and build connections into the community over the past 10 years that I have been director and it brings prestige to our community as well as a positive economic impact.”

The Wilmington Symphony is a member of the League of Symphony Orchestras and operates as a nonprofit organization in partnership with the University of North Carolina Wilmington (UNCW). It is self-governed by a board of directors comprised of members of the community. Financial support is derived from ticket sales sponsorships grants corporate and individual contributors and special fundraising events such as the annual golf tournament classic.

“Both UNCW and the Wilmington Symphony are very fortunate to have had a mutually beneficial partnership since the beginning ” Wallace says. “UNCW provides a portion of the conductors time the rehearsal space and the music library space. In exchange the orchestra provides an opportunity for qualified students to perform for course credit tickets for UNCW students and a platform to showcase the tremendous talent in the schools music department including faculty members who are often featured soloists for various performances.”

Since its beginning the Wilmington Symphony Orchestra has been fortunate to receive the support of dedicated people who believed and still believe in the benefits of a local orchestra not only for themselves but for the community.

When Gail Zack moved to Wilmington in December 1970 from Johnson City Tennessee she left behind a city orchestra she helped to start. “I hated those first few weeks in Wilmington ” Zack confesses “because I missed playing violin with the orchestra.”

As a way to bounce back Zack and fellow violinist Virginia (Jenny) Kusler decided to organize an orchestra in Wilmington. “In the spring of 1971 we called up Richard Deas head of UNCWs music department at the time and asked to meet with him ” Zack remembers. “To our delight he was excited about the idea of a local orchestra and appointed a faculty member William F. Adcock to be the first conductor.”

“We spent the next several months trying to get the word out about the new symphony orchestra ” says Zack. “Just before our first organizational meeting was to take place we realized we had no music. Someone told us that Wilmington had had an orchestra back in the 1930s and a man named Sipke Feenstra had been the music librarian. We decided to give him a call to see if we could borrow some music. We quickly discovered he wasnt about to hand over the music to a couple of strangers.”

Disappointed Zack and Kusler decided Feenstra required a personal visit. “I remember the day Jenny came to pick me up and there in the front seat of her car was this gorgeous cherry pie ” Zack explained. “When we arrived we presented him with the cherry pie talked to him for a while and walked away with the music. I think he just needed to know we were serious and that the music would be put to good use.”

In the fall of 1971 the first organizational meeting was held in the band room at Keenan Hall. “We at least had some music to put in front of the 30-40 people who showed up that night ” Zack says “although it wasnt a lot of music and we didnt have complete sets.” The group continued to practice at Kenan for many years then moved to the new Cultural Arts Building soon after it opened in the fall of 2006.

“We gave two concerts our first year and then two or three a year for the next several years ” Zack says. “We got better and better and began to attract better musicians.” Today Zach still plays second violin a choice that was made for her at the very beginning when she and Kusler flipped a coin to see who would play first violin and who would play second. “Ive developed a real taste for second violin ” says Zack. “I absolutely love it.”
Zacks commitment to the orchestra for all these years mirrors the commitment of the entire group. In 39 years with the orchestra Zach has only missed two concerts one when her father died and a recent one because she had shoulder surgery. “My husband and kids were always very tolerant because they knew how much the orchestra meant to me ” says Zach. “I think our very first concert was on my daughters eighth birthday. I felt guilty about it but she was so sweet and she was fine with it.”

The orchestra continued under the direction of Mr. Adcock until he became ill in 1981 and Dr. Joe Hickman was appointed assistant conductor. The following year Hickman took over full time and served as conductor for the next five years. In 1986 Steve Errante joined the staff at UNCW as both a teacher and the new conductor of the Wilmington Symphony Orchestra.

Errante says that over the 22 years he has been the conductor the orchestra has significantly raised its performance standards. “When it started it was really a volunteer orchestra and existed for the pleasure of the people playing ” Errante says. “In the beginning we gave concerts and if people came that was good if not oh well. Now were a lot more focused on our relationship with the audience and our concerts are for the pleasure of the audience as much as the players.”

Errante stresses that his goal is to make orchestra music a thrilling experience for everyone. “If we can take a terrific composer and bring his music to life so that everyone in the audience experiences and feels it weve done our job.”

The WSO has been performing a five-year Beethoven cycle beginning with Beethovens 5th Symphony in the 2006/2007 season. The culmination of the cycle will take place in 2011/2012 season with the performance of Beethovens 9th Symphony in celebration of the 40th anniversary of the Wilmington Symphony Orchestra.

In June 2009 the U.S. Commerce Association (USCA) selected the Wilmington Symphony Orchestra for the “2009 Best of Wilmington Award” in the orchestra or bands category. Over the years the orchestra has not only contributed to the cultural impact of the city but has provided the community with a number of educational programs and opportunities.

One major component of the WSO is the Wilmington Symphony Youth Orchestra a full orchestra with strings winds brass and percussion that is open to students grades 9-12 by audition from both public and private schools as well as young musicians who are home schooled.

The Junior Strings Orchestra is another educational program of the WSO. Begun in the fall of 2009 the program is geared for 6th-8th grade students and provides ensemble experience for kids just starting in the string instruments.

The WSO also sponsors the prestigious Richard R. Deas Student Concerto Competition for outstanding student musicians. In its 33rd year the competition was launched by the chair of the UNCW Music Department back when the WSO first began. There are two annual winners a high school student and a college student that are selected by a panel of judges. The winners typically perform in a February concert and are accompanied by the WSO.

The Artist-in-Residence Program helps public schools by sending out orchestra soloists to play and talk to students in an informal setting. Beverly Andrews concertmaster for WSO considers herself an ambassador for the Wilmington Symphony. “I go places to talk or play organize groups from the symphony to play for benefits ” says Andrews. “This year I was asked to be one of the judges for the All-County Orchestra.”

The Wilmington Symphony Orchestra also puts on family concerts to encourage parents to bring children to the concerts. The Birthday Club is a program for very young children who might not be able to sit through an entire performance. They receive a birthday card signed by the conductor an invitation to a dress rehearsal and get a special backstage pass.

What does the future hold for the Wilmington Symphony Orchestra? “Were looking ahead to an exciting 2010/2011 season and to the celebration of our 40th anniversary as an orchestra ” says Errante. “I also hope for a larger venue at some point in the future and I would like to see us perform for a larger variety of events.”

Errante also sees the orchestra moving towards professional status. “Myrtle Beach and Fayetteville both have professional orchestras ” Errante points out. “Its time for Wilmington to also move in that direction.”