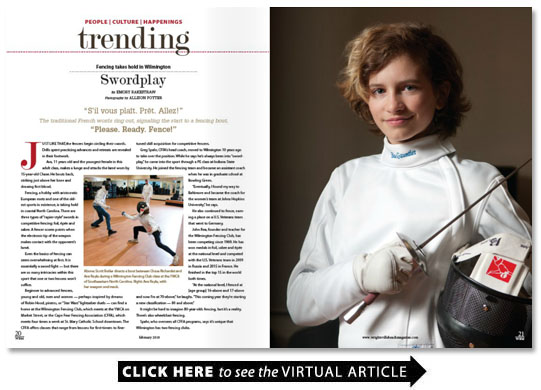 The traditional French words ring out signaling the start to a fencing bout.

Just like that the fencers begin circling their swords. Drills spent practicing advances and retreats are revealed in their footwork.

Ava 11 years old and the youngest female in this adult class makes a lunge and attacks the lam? worn by 15-year-old Chase. He bouts back striking just above her knee and drawing first blood.

Fencing a hobby with aristocratic European roots and one of the oldest sports in existence is taking hold in coastal North Carolina. There are three types of “rapier-style” swords in competitive fencing: foil epee and sabre. A fencer scores points when the electronic tip of the weapon makes contact with the opponent’s lame.

Even the basics of fencing can seem overwhelming at first. It is essentially a sword fight — but there are so many intricacies within this sport that one or two lessons won’t suffice.

Beginner to advanced fencers young and old men and women — perhaps inspired by dreams of Robin Hood pirates or “Star Wars” lightsaber duels — can find a home at the Wilmington Fencing Club which meets at the YMCA on Market Street or the Cape Fear Fencing Association (CFFA) which meets four times a week at St. Mary Catholic School downtown. The CFFA offers classes that range from lessons for first-timers to fine-tuned skill acquisition for competitive fencers.

Greg Spahr CFFA’s head coach moved to Wilmington 10 years ago to take over the position. While he says he’s always been into “swordplay ” he came into the sport through a PE class at Indiana State University. He joined the fencing team and became an assistant coach when he was in graduate school at Bowling Green.

“Eventually I found my way to Baltimore and became the coach for the women’s team at Johns Hopkins University ” he says.

He also continued to fence earning a place on a U.S. Veterans team that went to Germany.

John Rea founder and teacher for the Wilmington Fencing Club has been competing since 1969. He has won medals in foil sabre and epee at the national level and competed with the U.S. Veterans team in 2009 in Russia and 2015 in France. He finished in the top 15 in the world both times.

“At the national level I fenced at [age group] 16-above and 17-above and now I’m at 70-above ” he laughs. “This coming year they’re starting a new classification — 80 and above.”

It might be hard to imagine 80-year-olds fencing but it’s a reality. There’s also wheelchair fencing.

“Given a city of its size it is quite remarkable that Wilmington has two flourishing fencing clubs ” he says.”John Rea

and I do things a bit differently so students have the opportunity to see what works best for them. I think we see our relationship as one of friendly competitors. When our fencers come up against each other in local events of course our people root for our people.When we are at national events it is unlikely that we will have to compete against each other so we root for and assist the other Wilmington fencers.”

Rea has been teaching fencing for 20 years. His experience is obvious as he works with youth during a Wednesday evening class. These are young fencers — energetic jovial and excited for their chance at a sword fight.

“After you get a jacket and a body cord then you’ll put the lame on ” he says his voice rising slightly louder than the bursts of conversation around him. The students pull on their face masks white jackets and shimmering silver lames.

The smallest boy in the class maybe around age 7 puts on his face mask and holds his blade in the air. “I’m special!” he declares in a high-pitched voice.

“I have the capacity to kill now!” another says.

It’s all in play mode coming from minds still filled with the idyllic wonder of youth. Fencing is comparable to playing in the woods with an old friend imagining the shady oak as a commanding tower and the creek a trail to the ocean. It’s bringing the element of knights dragons kings and queens into reality.

The sport of fencing with its varying sword sizes is accommodating for both children and adults. Most beginning fencers start with foil the smallest and easiest to hold. During a Tuesday evening practice at the YMCA some Wilmington Fencing Club members fence sabre while most fence epee.

Dr. Svetlana Staub a pediatrician by day helps coach both the youth and adult class held at the Y and she’s always willing to bout (and practice) against some of the class’s youngest members including 11-year-old Ava.

Ava has been fencing with the Wilmington Fencing Club since she was 8. She’s quick on her feet and took to the sport naturally. So much so that she was in the adult class by age 10.

She’s charismatic and enchanted by fencing. Once the mask goes on and the bout begins her natural precision with the sport and sword is evident.

While fencing might be traditionally viewed as a male-dominated sport it’s both fluid and adaptable for men and women. Staub grew up fencing in Ukraine at a time when women were only allowed to fence foil. Now she fences all three swords as well and assists young fencers like Ava in their skill.

Ava was instantly captivated after her first-ever class.

“I remember feeling very invigorated ” she says. “I had met Chase for the first time and of course he beat me and I remember going home and thinking ‘I gotta beat that kid.’ I’m very proud of doing fencing because not a lot of people do it.”

Parents with children in the program often say the desire to fence began with watching movies like “Robin Hood” and “Star Wars.” Ava’s mother Kathy Rayle says for Ava it was “The Princess Bride.”

“There’s a great fencing scene and she loves that movie ” Rayle says. “It just gave her the flicker of the idea and she had a real knack for it so she stuck with it.”

Rayle researched fencing programs in Wilmington and found Rea. His club provides all weapons a bonus for those who just want to try the sport once and see if they like it. Rea also attends every competition usually held in Fayetteville and remarkably refuses to take any pay for his coaching.

For many children who have yet to find their niche in more traditional sports fencing serves as an outlet to try something different while making friends. Such is the case with 10-year-old Caden.

It’s the last night of the first session of the youth class. Caden’s mother father and grandparents are in attendance watching him fence. Caden originally came into the sport after trying soccer. He’s a sweet shy type who says he prefers reading books to playing traditional sports. But he loves fencing.

Chris Thomason watched his son flourish in the short six weeks after he tried his first session. While Caden’s first class was a bit awkward since he wasn’t acquainted with the heavy gear or mask he would go home and practice after each lesson.

“He played soccer and didn’t like that ” Thomason says. “We were trying to find something for him to do. We looked on the YMCA website and they had fencing. We thought that’d be really cool. For years he’s been watching ‘Star Wars’ and he’s always been asking me how to teach him to sword fight so I thought this would be awesome for him.”

While many young children come in and out of sports well into adolescence Rea believes fencing is a sport that stays with a person forever.

“The one thing that’s really true: it doesn’t matter where you go if you go to a fencing club and you’re a fencer you’re going to immediately walk in to a bunch of dedicated intelligent happy people ” he says.