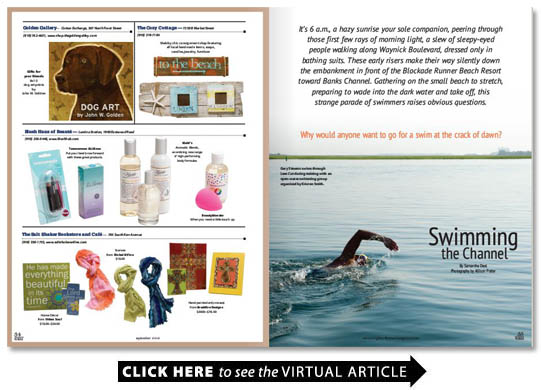 For anyone familiar with the sport of swimming this seems to be the perennial question. Why?

Those few early hours poised between pitch dark and a sun-soaked Wrightsville Beach sky are the best hours for these athletes to log a mile or two of open-water swimming. Setting their alarms for 5 or 5:30 a.m. means they can be in the water before the boats are out before the wind picks up or before the tide falls. During the summer months the channels dark water feels more like getting into a warm bath.

Wrightsville Beach has long been North Carolinas central open-water location. This September marks the eighth annual Pier-2-Pier Swim Race in which swimmers from many surrounding states battle the two miles from Johnnie Mercers Pier to Crystal Pier. This local race draws everyone from novice swimmers to the most elite open-water specialists in the nation. The 2008 Pier-2-Pier champion Chip Peterson and 2009 champion Joe Kinderwater have represented the United States in international open-water competitions not a bad draw for a small town race that isnt even sanctioned with USA Swimming.

Theres nothing like it on the N.C. coast says Kristen Smith creator of Swim the Loop. To find something like this you would have to go up to the Chesapeake Bay Swim or down to Florida for the Key West Swim which is 12 miles.

This new 3.5-mile race provides the challenge of swimming the Intracoastal Waterway into Lees Cut swimming Banks Channel into Motts Channel and back into the ICWW. The course starts and ends at Dockside.

If I want to swim back and forth I can do that in a pool she says.

As a coach for the YMCA Masters Swimming Club Smith spends plenty of time organizing group swims in the channel. In the ocean the direction of the wind is the most important factor to consider. If you want to swim in the channel theres a lot more to think about.

Knowing the tide and the wind direction makes for an easier transition into open water Smith says.

La Fave is remembered as the woman who swam 10 miles from the north shore of Carolina Beach to Dockside last summer in an effort to raise money for the Zimbabwe Orphan Empowerment Ministry.

People will always ask me if I can add them to the [email] list so theyll know what time and what direction were swimming says La Fave.

Unlike the YMCA masters group which sometimes crosses the channel La Faves group
usually sticks close to the docks.

If theres a first-timer even if theyre a good swimmer they could have panic attacks out there in the middle of the channel. Id prefer for that not to be the norm La Fave says.

Typically La Faves group swims from the U.S.C.G. station to the Blockade Runner. By sticking close to the docks everyone is able to move at his or her own pace. If anyone needs to quit the docks are close by.

The docks serve another very important purpose: They are the easiest landmarks to sight while swimming in the channel. Both Smith and La Fave are quick to pin sighting as the most important skill for a novice open-water swimmer to grasp.

I always preach knowing where youre at Smith says. Thats the biggest thing. Sighting is essentially a term for lifting your head every five or six strokes and fixating on a stationary object. That object could be a water tower a channel marker or a dock based on where you happen to be.

If were crossing the channel then Id say use the channel markers but if were along the docks then try and keep within ten feet of the docks she says.

As Smith points out sighting is a great reference. If you suddenly notice that all of the docks are getting farther and farther away not only does that let you know that youre not swimming in a straight line it also lets you know youre drifting out into the channel.

Smith and La Fave say there are two ways to sight: You can press down during your stroke and look up or you can literally stop swimming and look around. Obviously to keep swimming is better but if youre a novice swimmer sometimes it can be easier just to stop Smith says. Stopping to look around is exactly what Erik Rasmussen did during his first few swims in the channel.

Rasmussen moved to Wilmington from Chicago one year ago. He had very little open-water experience.

The best way for me to meet new people is to get involved in athletics says Rasmussen who owns an outdoor adventure tour company with his wife Myra. He became involved with the local sporting community by joining the YMCA TriClub. I kept overhearing people at the TriClub talking about swimming in the channel.

He asked YMCA TriClub coach Alicia Uhl where to go.

Alicia and the other people in the class said to try the Blockade Runner so I just showed up and jumped in and hoped I wouldnt be a bother to anyone. There was a learning curve as to constantly stopping and looking around Rasmussen says. I had to learn to be always aware and not
to just zone out.

In October 2011 while riding his tri-bike on Lumina Avenue Rasmussen was struck by a work trailer. He suffered a herniated disk in his neck as well as extensive damage to his nose and cheekbones. Any other person might consider these sorts of injuries rather serious but for a guy who leads marathon races along the Inca trail the injuries seemed miniscule when compared to other possible outcomes. For Rasmussen it was a long road back to swimming. In late January he returned to swimming in the pool.

Those first few swims proved very difficult. Due to his injuries turning his head to breathe was almost impossible. He was finally able to get back into open water after months of tedious physical therapy.

Like La Fave and Smith Rasmussen has a passion for being outside feeling the sun on his face and the warm water all around him. According to La Fave if youre going to swim distance there is no more beautiful place to be.

La Fave says In a pool youve got to go back and forth flip turn after flip turn counting your laps. When you swim in the channel its almost like you forget youre exercising.