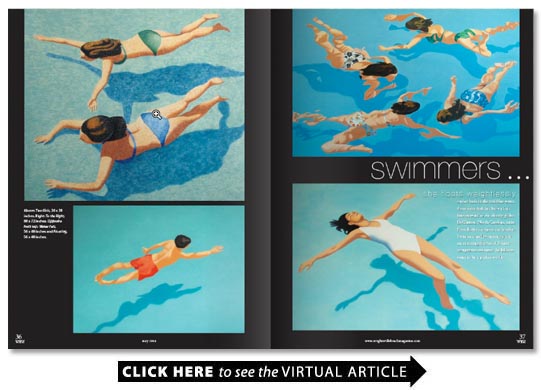 She floats weightlessly on her back in the teal blue water. Arms extended her brown hair fans outward as she silently glides. In Clinton North Carolina artist Peter Butler s subjects are familiar. Swimmers and swimming pools are recurring themes. A former competitive swimmer he believes water to be a perfect world.

There is a general universally experienced quality to a lot of my subject matter. That is a very conscious decision on my part. I cannot conceive of an art that doesn t seek the widest possible audience   Butler explains.

Cows are another common theme in Butler s paintings. He depicts them comically — fat slow and unwieldy. Often they are in the wrong place like standing on the beach. Butler observes their blank stares convey a human-like quality almost as if they are a benign version of ourselves.  People like  em and I keep doing them   Butler declares with a laugh.

A full-time painter Butler s medium is strictly oil on canvas or oil on paper to make monoprints. He uses vivid colors and mass to create space. He edits out complexities to achieve simplicity in his work that appeals to a wide audience and does not require too much thought to enjoy. As a rule Butler works on one painting at a time which may take anywhere from one day to one year.

Butler 59 has identified himself as an artist since he was 15 years old growing up in northern New Jersey. He was reared fully exposed to art visiting museums and galleries in New York. He fell in love with art and the masters: Rembrandt Cezanne and Van Gogh. Butler earned his Bachelor of Fine Arts from University of North Carolina Chapel Hill in 1976. A North Carolina resident for 26 years Butler says he enjoys being in a rural setting. The American South appeals to him — the manners food music and culture.

Small town life agrees with me   Butler says.  And there s a real market in North Carolina for the arts.