Half a centurys worth of Decembers has passed since Andy Williams first crooned it but Christmas is still the most won-der-ful time of the year. Not only that; its arguably the busiest! But amidst the hustle and bustle pause a moment to bask in the warm and welcoming aromas of Christmas cakes breads cookies pies and other wonders wafting lazily from kitchens all around town.

When it comes to Christmas baking nothing trumps tradition. In Germany stollen (a sweet yeast bread containing fruits and nuts sort of a classy version of the much-maligned fruitcake) is huge figuratively and literally. Each year the streets of Dresden are home to a Stollen Festival whose origins wind back to 1730 when Saxonys August the Strong commissioned the baking of a 1.8-ton loaf (you read that right) to be drawn into camp by eight horses and parceled among guests of the Saxon court. In his day August the Strong hoped to impress those served with the show of his military magnificence.

Today the intentions are humbler but the proportions more extravagant: Slices of the mammoth loaf are sold among the crowd to raise money for charity and the biggest stollen on record (baked for the 2000 Dresden Stollen Festival) registered a digestion-defying 4.2 tons!

Over seas and centuries from kitchen to kitchen and recipe to recipe each Christmas treat offers the same underlying flavors the sweetness of time the spice of effort the warmth of family. Here on the Azalea Coast every household is host to its own trove of traditions but it can never hurt to add another. If a handful of our finest local bakers can share their favorite recipes with you surely you can make room for a bit more dessert! 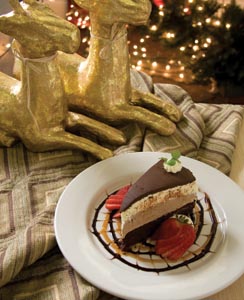 Considering that Flanagan has been the inspiration behind the mouth-wowing delicacies at Sweet & Savory Bake Shop (1611 Pavillion Place) since its inception one has to agree: Indeed Mr. Flanagan its worked very very well.

Flanagan and Sweet & Savory owner Rob Shapiro were in full agreement on the dessert that deserves a place on every holiday table: the Tri-Color Chocolate Dlice. Layering both chocolate mousse and vanilla mousse atop a seriously chocolate flourless cake and drizzled with chocolate ganache the Dlice (French for “delight”) is a unanimous crowd-pleaser as well as Sweet & Savorys most popular dinner dessert. This cakes secret Shapiro confides lies in its composition: “The chocolate cake base is so rich that the mousse tastes light and airy like youre drinking a glass of milk right as youre eating it.”

In matters of art it helps to have taste; in matters of taste it helps to have well artistry. Which is exactly what Roberta Campani pastry chef extraordinaire brings to each delicacy she crafts at Wilmingtons new La Gemma (2323 S. 17th Street) that and a devout bakers integrity: every detail matters and everything from scratch. 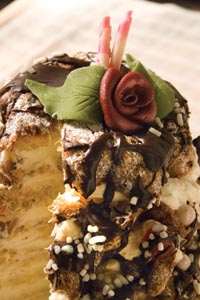 A taste of her treats will have you incredulous (they are every bit as good as they look) but Campani never baked growing up. Her background is in art and when she turned her talents to the kitchen it was as a chef first working privately for families in Key West Florida where she met husband Jim also a professional chef and then cooking for restaurants in Cape Cod Massachusetts. Throughout this time Campani also baked for the restaurants where she worked. “But that ” she insists “was only for fun.”

When the couple settled in Wilmington they envisioned opening a restaurant but as opening day drew near they decided a bakery would be more their speed. “I just said Oh a bakery will be easier! We laugh at that now ” says Jim Campani whom Roberta dubs “the king of La Gemmas bread.”

After a work sojourn in Italy during which Roberta honed her skills and acquired more recipes and Jim learned the layout of a fast-paced bakery La Gemma was born. From day one Roberta and her crew have made it a mission to implement everything they know from Italy. “After many generations ” Campani explains “the recipes became something else. So here we aim for authentic.” Still more paramount she says is this: “We crack hundreds of eggs every day. Everything is fresh; nothing is pre-made.”

If Campani didnt bake growing up what did she do at Christmas? “Decorations!” she says “even the food.” Among her favorites an Alberello di Natale. In this dessert display both decorative and delectable Campani twists and piles layers of Italian pandoro (a sweet yeast bread shaped like an eight-pointed star; a complicated recipe requiring an eight-pointed mold) and mascarpone mousse into Christmas tree formation for a centerpiece thats truly all its stacked up to be.

Delicious nutritious whole grain dough has been rising for more than 30 years at Great Harvest Bread Company (5327 Oleander Drive) and for 16 years here in Wilmington. Great Harvest mills all its own wheat flour oat flour and spelt flour they dont bake with anything frozen and they dont use mixes starters or preservatives. If the words “fresh bread” hold any sway for you this is the place to get it. 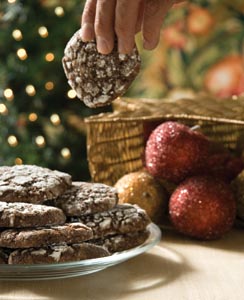 Samantha Smith manager and baker at Great Harvest considers the bakery a formative tradition in her own life. “I used to go when I was a freshman in high school ” she reminisces “and couldnt wait to start working here after I graduated.” In her loyalty shes hardly alone: “We have people whove been stopping in every morning for coffee and a scone the whole time weve been in both places.” Meaning that when after 11 years Great Harvest moved across town from its former Market Street location the customers didnt flinch; they migrated with their bakery.

Smiths favorite Christmas cookie recipe is for Cheery Chocolate Crinkles and its no wonder they hang from nearly every branch of her family tree. Grandpa Jack gets credit for their recipe; it was Grandma Martha who taught three-year-old Samantha to make them and now Smith and her sister bake the cookies each year. “The first time we did them at Great Harvest ” Smith recalls “we baked 120 dozen. For days you could smell chocolate when you pulled into the parking lot!”

The best thing about these “happy little cookies” is that “theyre just messy enough for kids to find them super fun and perfect for leaving out on the plate for Santa ” says Smith. She adds this confectionary confession: “We put more chocolate in than any of the recipes say.” Now that is both naughty and nice.

Apple Annies Bake Shop (837 S. Kerr Avenue and Landfall Center) is first and foremost a family affair. But the phrase “mom-and-pop shop” drastically belies the grand-scale operation that defines this establishment which now has two locations in Wilmington and produces cookies cakes tarts and pies by the masses. 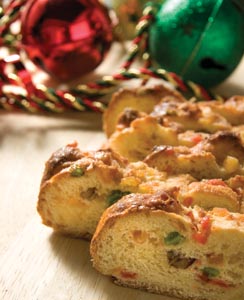 Apple Annies already counts six generations of bakers in its legacy and theres little chance that span wont keep stretching. From a small town in Italy where Great-Great-Grandpa Longordo baked bread and pasta for the locals to a bread-only affair to New Jersey where Grandpa Longordo took the bakery operation full-scale finally to Wilmington where Gary and Christine Longordo now run the business baking has been handed down in this family like a treasured heirloom.

Even today Apple Annies is maintained not only by Gary and Christine but by Frank (Garys father-in-law) both of Gary and Christines daughters Christines brother Garys sister and “many people who have worked with us so long we consider them our extended family ” Christine Longordo says. The bakerys recipes including their European Holiday Stollen have stood the test of time most are more than 50 years old and the goodies they yield sell as well as ever.

This is a chilled dough! Do not preheat the oven yet!

Combine melted chocolate oil and granulated sugar. Using a hand or stand mixer beat on low until incorporated. In a separate bowl combine dry ingredients. Set aside. Mix eggs into chocolate one at a time scraping as you go. Add vanilla (and mint if you wish). Stop mixer. Pour in dry mixture and stir until combined. Chill dough overnight. (This dough will keep in fridge for one week or in freezer one month.)

The flourless chocolate base:

Melt the butter. Whip the eggs to a light foam. Whip the vanilla into eggs. Pour the melted butter over the chocolate chips and stir until melted and combined. Pour the chocolate mixture into the egg mixture and whip at low speed until cooler. Pour into a nine-inch round pan. Bake in a water bath (with the baking pan inside a larger pan filled with water) at 350 degrees for 25 minutes. Allow to cool inside the water bath to room temperature and then put in the freezer overnight.

The vanilla (and chocolate) mousse:

Cut the pandoro into horizontal slices. Mix the mascarpone cheese with the egg yolks until creamy. Whip the egg whites adding the sugar slowly until stiff then add to the yolks mixture slowly churning from bottom to top. (If the cheese mixture is too soft you can add whipped cream with a stabilizer to stiffen it.) Assemble the tree by adding the mascarpone cheese mousse between layers making sure that each slice is twisted in a different direction. Decorate with the candied cherries. Melt the chocolate and drizzle it with a spoon on the tree. Finish with whipped cream and powdered sugar.

Soak the raisins wash the fruit in warm water and strain well. Blend together the following ingredients: water yeast sugar salt whole eggs shortening bread and pastry flour. Give the dough full fermentation before adding the fruit and nuts. After the fruit and nuts are mixed in allow to rest 20 minutes then take to the bench. Proof approximately 30 minutes. Finish as desired. If youre going to sprinkle with powdered sugar wash with melted butter first.

(Apple Annies Note: This is a home-bakers version of our stollen. We add liquor to ours and let it soak longer.)