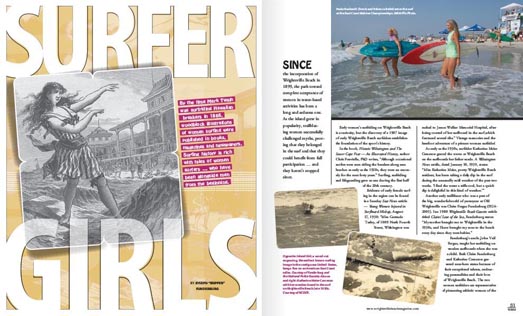 By the time Mark Twain was surfriding Hawaiian breakers in 1866 woodblock illustrations of women surfing were published in books magazines and newspapers. Surfing history is rich with tales of women surfers who have been alongside men from the beginning

Since the incorporation of Wrightsville Beach in 1899 the path toward complete acceptance of women in water-based activities has been a long and arduous one. As the island grew in popularity trailblazing women successfully challenged myths proving that they belonged in the surf and that they could benefit from full participation and they havent stopped since..

In the book Historic Wilmington and The Lower Cape Fear An Illustrated History author Chris Fonvielle PhD writes “Although occasional surfers were seen riding the breakers along area beaches as early as the 1920s they were an anomaly for the next forty years.” Surfing surfriding and lifeguarding grew as one during the first half of the 20th century.

Evidence of early female surfing in the region can be found in a Sunday Star News article Young Women Injured in Surfboard Mishap August 17 1930: “Miss Gertrude Turley of 1009 North Fourth Street Wilmington was rushed to James Walker Memorial Hospital after losing control of her surfboard in the surf which fractured several ribs.” Vintage memories and the barefoot adventure of a pioneer woman surfrider!

As early as the 1930s surfrider Katherine Meier Cameron graced the waves at Wrightsville Beach on the surfboards her father made. A Wilmington News article dated January 10 1939 states: “Miss Katherine Meier pretty Wrightsville Beach resident has been taking a daily dip in the surf during the unusually mild weather of the past two weeks. I find the water a trifle cool but a quick dip is delightful in this kind of weather.”

Another early trailblazer who was a part of the big wonderful world of yesteryear at Old Wrightsville was Claire Fergus Funderburg (1924-2005). In a 1980 Wrightsville Beach Gazette article titled Claires Love of the Sea Funderburg states: “My mother brought me to Wrightsville in the 1930s and I have brought my sons to the beach every day since they were babies.”

Funderburgs uncle John Vail Fergus taught her surfriding on wooden surfboards when she was a child. Both Claire Funderburg and Katherine Cameron garnered near-hero status because of their exceptional talents endearing personalities and their love of Wrightsville Beach. The two women surfriders are representative of pioneering athletic women of the 30s 40s and 50s.

The social changes of the 1960s and 1970s created new attitudes about and toward women and changed womens surfing and surfriding. The first “Gidgets” had to use surfing products that were made for men. Not having the right equipment restrained their movements and prevented them from giving their best performances. A lack of role models bathing suit problems and pressure regarding how surfing affected looks and comportment were also issues.

The golden era of womens surfing on Wrightsville Beach is usually dated from Christmas 1963 when Dolly Ruth Fergus Bidwan and Virginia “Ginny” Fergus Mullinax got surfboards from Santa. The Fergus girls were entering and winning surf contests on Wrightsville Beach by 1965. Arguably the Fergus girls surfing record is regarded as the spark that led to the popularity of female surfing after 1965.

In 1966 Katy Dean Monaghan moved to Wrightsville Beach from Illinois and quickly swapped her horse saddle for a surfboard. She carved a place in the new Wrightsville Beach surfing community becoming a prominent female surfer who truly personified what surfing meant to the new generation of surfer girls. She surfed with confidence and is included in the first group of North Carolinas women surfers.

As legends go North Carolinas Toni Bryant became one of the most competitive female surfers on the East Coast winning the coveted Womens Title at the 1973 East Coast Surfing Championship in Cape Hatteras. By 1978 Bryant earned the right to a berth in the prestigious United States Surfing Championships setting the gold standard for local womens surfing for decades. Women surfing professionals in that day earned less than 1/20th of what their male counterparts earned. Bryant retired by 1980.

In 1975 Jo Picketts surfing career began when she paddled out at Crystal Pier. Pickett was the 2004 US Womens Surfing Champion and the 2006 and 2009 ESA Eastern Champion. She is the founder of Crystal Surf Camp and serves as a wonderful role model for women surfers. She has represented North Carolina for almost 40 years and epitomizes the carefree sunny happy conscientious yet competitive surfer.

Finding romance along the strand and in the surf has always been popular among women surfers. In 1980 the gifted and resilient Karen Allison arrived on the Cape Fear coast. Karens beatific and balletic wave-gliding abilities won surf legend Will Allisons heart and the enchantment led to their marriage. Karen is co-founder of Allison Surfboards a prominent surfboard company that builds long and short boards paddleboards and more.

By the mid 1970s it was clear that women could accomplish in surfing what they had already accomplished in tennis and golf but they still didnt get their market share. As womens surfing unfolded and unfurled in the 80s and early 90s the rate of growth remained sluggish. According to The Encyclopedia of Surfing (Harcourt 2005) by Matt Warshaw womens surfing took a heavily publicized turn for the better in the mid 1990s and changed the way beach boys looked at beach girls bringing droves of young women to the sport. By the end of the decade there were womens magazines surf wear wetsuits documentaries travel and women-only surf schools. What had started as a Polynesian folkway and a local curiosity had become a global multi-billion-dollar economic force.

By 1997 legions of wives mothers daughters and sisters embraced surfing like never before. That same year The East Coast Wahine Championships (ECWC) was founded on Wrightsville Beach as a venue for amateur surfer girls on the East Coast.

The contest began under the leadership of founder Tammy Kennedy continued by Anne Beasley Weber and Paula Bushardt and inspired many local girls to surf in a competitive event for women only. The ECWC is the largest all-female surfing contest on the American East Coast and has become a pilgrimage destination for surfer girls to showcase their talent. As the tides flowed and the time ticked many notable women surfers helped define Wrightsville Beach as a new epicenter of female talent. Fourteen years later the contest has become a surfing epic.

In 2000 the formidable Mary Ann Salvo Mangiacapre entered the mix as Southern North Carolinas Eastern Surfing Association district director. Her leadership qualities and resulting progress were so phenomenal that the ESA officials elevated her to East Coast Competitions Director a prestigious job requiring organizational skill specialized knowledge experience dedication and most of all a love of surfing. She excelled in the position and was crowned “Lady Grace” by her peers.

Around the same period Jen (and Rick) Civelli founded Wrightsville Beach Surf Camp and joined the womens surfing boom of the late 1990s. Their extraordinary passion to share her knowledge of marine science and environmental conservation was contagious. Jens inspiring “stoke” helped make taking care of our ocean resources a way of life and made giving back to social and environmental endeavors a fundamental part of WB culture. Civelli took on motherhood physical and mental fitness with the same gusto she applied to other causes and became a role model for both professional women and younger girls radiating health and happiness and coaching others to stay toned fit and focused through surfing.

Over the last few years Nikki Morris Bascome of Surfers Healing Autism Foundation has done an exemplary job of improving the lives of children with autism and their families through surfing. Her efforts are especially significant in that they provide a safe and comfortable means of communication an outlet that prior to the founding of Surfers Healing was simply unavailable for those with autism. Now an important (and wonderful) part of the summer on Wrightsville Beach Surfers Healing attracts women surfers from around the area and the world.

Younger surfer girls of today have discovered that women surfers are strong and beautiful. Statistics indicate that the fastest growing demographic in female surfing is women in their 30s and 40s who enjoy surfing for relaxation and excitement. Todays surfer girls take life as it rolls in with the waves. Their look is classy carefree and casual; their attitude is optimistic confident and fun. As history shows us there have always been women in the Wrightsville Beach surf and it seems safe to say that there always will be.

Authors Note: My mother Claire Funderburg was a water sports pioneer in Old Wrightsville and the best mother a young surfer could have. She was the aquabelle icon of a beach generation.

The terms “surfing” and “surfer” appear only in the 20th century and when used by themselves indicate the act of standing on a surf board or one who stands on a surfboard. In 1908 Carolinian mastermind Alexander Hume Ford coined the words “surfer” and “surfing” in a letter supporting the Outrigger Canoe Club Waikiki Hawaii.