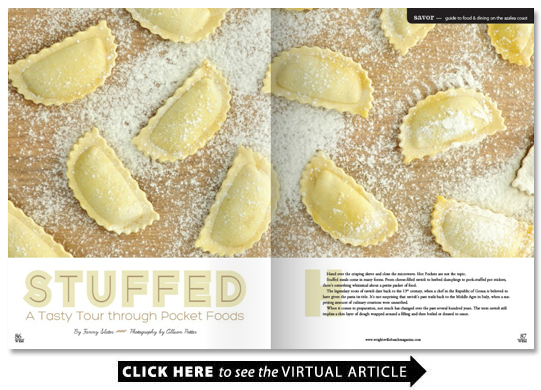 A Tasty Tour through Pocket Foods

Hand over the crisping sleeve and close the microwave. Hot Pockets are not the topic.

Stuffed meals come in many forms. From cheese-filled ravioli to herbed dumplings to pork-stuffed pot stickers there’s something whimsical about a petite packet of food.

The legendary roots of ravioli date back to the 13th century when a chef in the Republic of Genoa is believed to have given the pasta its title. It’s not surprising that ravioli’s past trails back to the Middle Ages in Italy when a surprising amount of culinary creations were unearthed.

When it comes to preparation not much has changed over the past several hundred years. The term ravioli still implies a thin layer of dough wrapped around a filling and then boiled or doused in sauce.

If anyone knows about dough-boiled tradition it’s Southerners. Even those who don’t use “y’all” in their daily vocabulary surely have heard of chicken and dumplings. This comfort food classic is a soul-soothing wholesome supper that’s deep-seated in folklore.

Beware of food fables surrounding the foundation of this dish. Conventional wisdom says it was developed as a cheap meal during the Great Depression but many claim that’s just a culinary cliche. No pun intended but it’s hard to wrap your brain around how this era could prompt frugal cooking in areas that were already impoverished.

There may be some truth to it — it makes sense that families would skimp in desperate times — but when it comes to the edible history of the American South this theory is a common inaccuracy. The great C&D debate can be put to rest with this: Recipes for chicken and dumplings surfaced years before the stock market crash.

Regardless of the origins it’s not necessarily a wallet-friendly way of eating but rather a rich delicious Southern dish that will live on forever.

With progressive Southern fusion cuisine currently taking the reins every chef and home cook has his or her own modernized version. Check this one out: Start by stuffing crescent roll dough with cream cheese shredded chicken and spices. Roll into pillows layer in a casserole dish and top with fresh homemade chicken stock. Probably not grandma approved but definitely clever and dang good on a rainy night.

Although typically stuffed with meat and cheese pocket-inspired foods come in all shapes and sizes and can be filled with practically anything. Ever heard of a ravioloni? Some authentic Italian eateries serve up this quirky dish that literally takes over the plate.

Don’t expect to share several triangles or a few half-moons in this supersized spread. Imagine a giant boiled (not baked) half-moon of pasta brimming with fresh ricotta and dusted with salty cheese. Warning: Your stomach is not bigger than your eyes.

As far as fillings go seasonal veggies and elegant seafood make for tasty and healthy alternatives.

They say it’s what’s on the inside that matters but when it comes to pocket-style food it’s equally about the sauce. For a creamy crabmeat stuffed tortellini an overpowering marinara may not be the best choice. Whether it’s a drizzle a dip or a soupy broth a pocket food’s pairing is just as important as what’s concealed within.

Many of these pasta-style dishes trace back to the chronicles of Italian history. However pocket foods are found in cultures around the world. Pelmeni are meat-filled dumplings of unleavened dough popular in Russia. The word itself translates to “ear bread ” which doesn’t seem so bizarre once you see a plate of these ear-shaped pockets.

Pelmeni originated in Siberia and are essentially streamlined versions of the Chinese wonton. They are also excellent solutions for preserving meat during the prolonged winter season. Pelmeni are in the same family as pierogi — another dumpling-style dish from Eastern Europe — but are distinguished by their exceptionally thin shell and always-savory filling.

Stuffed foods can shine outside the main course. Take New Orleans’ famous beignets for example. These deep-fried pastry pockets are celebrated for their airy insides and powdered sugar crowns. But pipe a little Nutella into these fluffy fritters and the result is a decadently filled sweet course worth every calorie.

For another dessert-style stuffed treat add a spoonful of sugar to traditional pasta dough seal in sweetened ricotta and fry away.

Don’t forget a fruity sauce to go alongside. For classic chocolate ravioli flatten homemade chocolate dough in a pasta machine and use a real ravioli tray to create the sugary squares. Fill with the ingredients of choice and chill to perfection. That is if you can avoid the temptation of devouring them on the spot.

Even Chef Boyardee probably didn’t have that kind of willpower.

On a large flat work surface mix together the flour and salt. Shape it into a mound and make a well in the center. Add 3 of the eggs and 1 Tbsp of the oil to the well and gently beat them with a fork. Slowly bring in the flour from the inside of the well in a circular motion — adding several Tbsps of water at a time — until it forms a ball.

Dust some flour on your work surface and knead and fold the dough until its texture is elastic and smooth 8 to 10 minutes. Brush the top of the dough with the remaining olive oil and wrap in plastic wrap. Allow the dough to rest for 30 minutes.

Slice the dough into two portions and cover the one you set aside with a damp cloth. Dust your work surface with flour and press the dough into a rectangular shape. Roll the dough through a pasta machine (or with a rolling pin) several times at its widest setting — pulling and stretching it after each round. Continue this process lowering the setting a little at a time until the machine is at its narrowest setting. The dough should be paper-thin.

Lightly fold the dough in half to make a crease and then re-open it. Place each amount of filling about 2 inches apart on the lower half of the sheet. In a small bowl whisk the remaining egg. Brush the egg wash onto the bottom edge of the dough. Fold the sheet over along the crease pressing to remove any excess air. Gently pat the dough around each lump of filling to tightly seal it in. Using a sharp paring knife or a ravioli cutter slice ravioli into their designated shapes. If desired — crimp the edges with a fork. Place finished ravioli on a flour-dusted pan while you finish assembling the rest.

1 cup diced wild mushrooms (such as shiitake oyster or porcini)

In a large skillet heat the olive oil over medium heat. Add the shallots and garlic season with a pinch each of salt and pepper and saute until translucent about 2 minutes. Add the ground sausage and saute until nicely browned and cooked all the way through. Using a slotted spoon remove the meat and shallots from the pan and place them into a large bowl. Leave any remaining fat in the pan and add the butter.

Once it begins to foam add the mushrooms and cook until lightly browned 2 to 3 minutes. Season them with salt pepper and 1/2 Tbsp of the thyme. Add the mushrooms and 2 Tbsps of the Pecorino Romano to the bowl with the sausage and mix well. Allow the mixture to cool to room temperature.

Divide the sausage mixture into equal pockets of the dough (following the directions in the dough recipe). Bring a large pot of salted water to a low boil. Cook the ravioli in batches to avoid crowding the pot. Boil until the ravioli float to the top about 3 minutes.

Divide the ravioli among 4 plates top with the Romesco Sauce and garnish with the remaining Pecorino and thyme.

In a food processor combine the toasted almonds garlic and a pinch each of salt and pepper and pulse a few times until the nuts are broken down. Add the roasted red peppers fire roasted tomatoes vinegar and paprika. Pulse until the mixture is thoroughly combined.

With the motor running slowly stream in several Tbsps of the olive oil. Keep pouring until the mixture is smooth but still has some texture to it. Season to taste with salt and pepper. Keep the sauce warm on the stove over low heat.

In a large skillet heat the olive oil and butter over medium heat. Add the garlic chard stems spring onions and honey and season generously with salt and pepper. Saute until the onions are translucent and the chard stems are tender 2 to 4 minutes. Remove the pan from heat add the chard leaves and Parmesan and cook until the leaves wilt and the mixture is thoroughly combined 1 to 2 minutes. Cool to room temperature.

Divide the chard and spring onion mixture into equal pockets of the dough (following the directions in the dough recipe). Bring a large pot of salted water to a low boil. Cook the ravioli in batches to avoid crowding the pot. Boil until the ravioli float to the top about 3 minutes.

Divide the ravioli among 4 plates top with feta cream and garnish with snipped chives and freshly cracked black pepper.

2 cups milk warmed on the stove

In a heavy-bottomed saucepan melt the butter over medium heat. Add the flour and stir until it’s completely incorporated with the butter about 3 minutes. Whisking as you pour slowly add the warm milk. Whisk constantly until the sauce thickens 4 to 6 minutes. Add the feta a pinch of nutmeg and season to taste with salt and pepper.

In a large skillet melt the butter over medium heat. Add the leeks and garlic and season with a pinch eat of salt and pepper. Saute until the leeks are translucent and then add the white wine and cook for 3 minutes. Add the lobster and cook for 1 additional minute. Cool the mixture to room temperature and then fold in the ricotta and chives and season to taste with salt and pepper.

Divide the lobster mixture into equal pockets of the dough (following the directions in the dough recipe). Bring a large pot of salted water to a low boil. Cook the ravioli in batches to avoid crowding the pot. Boil until the ravioli float to the top about 3 minutes.

In a small heavy-bottomed skillet melt the butter over low to medium low heat. Simmer until it reaches a very light golden brown and the fragrance is nutty about 4 to 6 minutes. Once the mixture turns a deeper golden hue immediately remove the pan from heat and whisk in the lemon juice and a pinch of salt. Strain the mixture through a fine mesh sieve. Once the sauce cools season to taste with additional salt if necessary.

Neutral oil for frying (such as vegetable or sunflower)

In a large bowl mash together the raspberries sugar and a pinch of salt. Fold in the mascarpone vanilla and orange zest. Chill this mixture in the refrigerator for 30 minutes.

Prepare a small bowl of cold water. Place two wonton wrappers on your work surface and spoon about 1 teaspoon of the filling into the center of each one. Brush all four edges of the wrapper with water. Bring together all opposite flat edges pinching together in the center and tightly sealing the seams. Continue with the remaining wontons and filling. Place the wontons on a greased cookie tray and freeze for 1 hour.

In a deep pan heat 2 inches of oil over medium heat until it reaches 350 degrees F.

Evenly divide the fried wontons among 4 plates and drizzle with the chocolate balsamic sauce and garnish with the hazelnuts. Serve immediately.

In a small saucepot heat the balsamic vinegar sugar and cocoa powder over low to medium low heat. Simmer until the mixture is syrupy and reduced to about 1/4 cup 8 to 10 minutes.