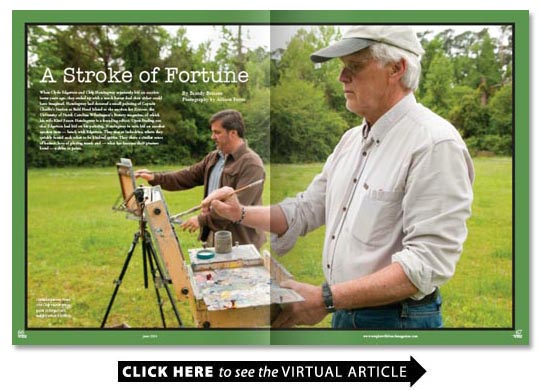 Hemingway an architect by profession is a partner in Bowman Murray Hemingway which emerged from Ballard McKim and Sawyer. He has designed three North Carolina Aquariums the Oregon Inlet Lifesaving Station Jennettes Pier and is currently designing the Audubon Center at Pine Island on the northern Outer Banks.

Edgerton a successful author and UNCW creative writing professor has published ten novels one memoir and his new book of advice Papadaddys Book for New Fathers. He had dabbled in painting but didnt really bloom until Hemingway schooled him.

When Clyde Edgerton and Chip Hemingway separately bid on auction items years ago they ended up with a much better deal than either could have imagined. Hemingway had donated a small painting of Captain Charlies Station at Bald Head Island to the auction for Ecotone the University of North Carolina Wilmingtons literary magazine of which his wife Kimi Faxon Hemingway is a founding editor. Upon finding out that Edgerton had bid on his painting Hemingway in turn bid on another auction item lunch with Edgerton. They met at Indochine where they quickly found each other to be kindred spirits. They share a similar sense of humor love of playing music and what has become their greatest bond a drive to paint.

Soon after that lunch out at Masonboro Island with their families they ran into each other. Hemingway was painting he is known to carry his supplies everywhere.

He always has his billfold and his painting stuff Edgerton says. He might not have anything else he jokes but hes going to have those.

Hemingway whose paintings are sold in local galleries is drawn to paint whatever is in front of him.

I love doing paintings at parties and of people playing music capturing the essence of something you couldnt necessarily take a photograph of Hemingway says.

Edgerton who says he was privately painting began observing Hemingways technique on Masonboro.

I started realizing so many things just by watching him that day and later on whenever we were at a party or something I could watch over his shoulder. Then I got up enough nerve to show him my awful stuff and he was very patient with it he says.

Today the two often paint together swapping advice and stories as well as plenty of laughs.

One of the things I could immediately feel was a lot of commonalities about where were from Edgerton says. I always feel comfortable around Chip. I can see something happening and look at him and know that he thinks its funny and know were both gonna laugh a lot!

Their kids play together and their families have cookouts where the dads paint in the backyard and play songs they have written. They also share their work via email.

We have a lot of email correspondence about the paintings. I send him my paintings he sends me his and we both comment. … Thats a lot of fun Hemingway says.

Nature is his main inspiration.

What I do is a journey into nature through art and architecture Hemingway says. Ive been very fortunate that a lot of my buildings Ive done are nature-oriented and strive to create an appreciation of nature. And thats what my art is.

Id sit out there on my surfboard and look at the colors in nature the ocean the sky. Its just mind-boggling. Waves are coming in youre riding on them and it was the kind of thing I wanted to show. I was trying to recreate that experience of nature that I thought was so beautiful Hemingway says.

Once he learned color theory he gravitated toward an impressionistic en plein air style.

I like the spontaneity of it all because I work on these architecture projects that take three or four years sometimes. So having something I can go out and do in one hour and its done its like wow! Okay thats it. I really like that tradeoff to my day job.

Sitting in his living room surrounded by several of his paintings Edgerton recalls his first encounters with Hemingway when he sought advice for his early work.

I remember taking a painting to Chip in his driveway a painting of a typewriter sitting on a deck and it was so bad. And he said Why dont you put some reflections of the keys in here? And when I looked at the photograph that I was working from there were the reflections that I had not seen. So I started learning how to see one color reflects off another color and how reflections work. Its just a matter of the details that you cant see when you start painting. You paint what you see and its terrible. Then you start seeing things he says. One thing Chip said to me is when you start painting dont paint what you see you paint what you know. So I started doing that.

Edgerton says an obsession with cars is what triggered his interest in painting.

I had some mathematical formulas figured out about how to do distances between tail lights and all this math stuff figured out. And I remember I showed it to Chip and I explained it to him and I remember the look on his face was like Where are you from?

Hemingway laughs at the memory.

He brought over this drawing the drawing was really good and he had all these mathematics and notes and I dont know what I was thinking. I think I was like Okay … now just paint it Hemingway says.

At the same time Edgerton chimes in I think he probably said just paint it.

They laugh and Hemingway adds I remember being very impressed with that drawing. It just showed how much his mind had gotten into that idea that he was going to create this thing.

Most art is some type of benevolent obsession that can send you off the deep end Edgerton says.

Hemingway chimes in Luckily you rebound back into society.

Yes you get back into life. Some people dont laughs Edgerton.

The big turning point for Edgerton was when Hemingway suggested he should try oil paints.

I was afraid of oils but I bought some oils and I did the first oil painting. And it felt like magic. It felt like the difference between homemade cake and bought cake smooth and nice he says.

Hemingway has become a regular in Edgertons annual good ol boy getaways. Edgerton talks about the first time he invited him on a fishing trip with a bunch of his childhood friends. While everyone else fished Hemingway asked to be dropped off on an island to paint.

If youre with the good old boys and you say youre gonna paint a painting it can get you in trouble really quickly Edgerton laughs. But Chip didnt even blink. He just picked up his board and said yall drop me off here and he did the painting. And all the good old boys were crazy about him.

Everybody loved it. And it kind of gave me some courage to be different as a painter Edgerton says.

Painting has become Hemingways version of a hunt.

I grew up hunting and fishing and I kind of evolved into this painter where I go sit in nature very much the same way you do when youre hunting and fishing where youre sitting there observing everything but instead of the hunting and all I do paintings. And I feel like the painting is my game my catch Hemingway says.

It was an incredible trip. We went to south Georgia to hunt quail and wild boar and of course there was Chip with his billfold and box laughs Edgerton.

Edgerton says he doesnt think hed still be painting if it hadnt been for Hemingway.

I think I would have gone to something else. I think with painting I was really lucky to meet Chip when I did. Besides the friendship I wouldnt have kept doing it but I got hooked and it was so much easier to get hooked with him there.

Hemingway says I tell people Ive been teaching Clyde about painting and we go out painting but everything else in life Ive been learning from him.