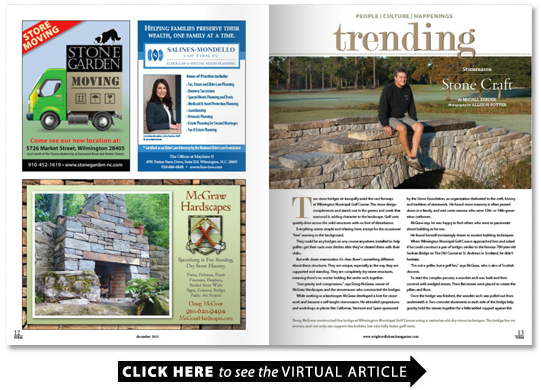 Two stone bridges sit tranquilly amid the vast fairways at Wilmington Municipal Golf Course. The stone design complements and stands out in the greens and creek that surround it adding character to the landscape. Golf carts quietly drive across the solid structures with no hint of disturbance.

Everything seems simple and relaxing here except for the occasional “fore” warning in the background.

They could be any bridges on any course anywhere installed to help golfers get their carts over ditches after they’ve cleared them with their clubs.

But with closer examination it’s clear there’s something different about these structures. They are unique especially in the way they are supported and standing. They are completely dry-stone structures meaning there’s no mortar holding the under arch together.

“Just gravity and compression ” says Doug McGraw owner of McGraw Hardscapes and the stonemason who constructed the bridges.

While working as a landscaper McGraw developed a love for stonework and became a self-taught stonemason. He attended symposiums and workshops in places like California Vermont and Spain sponsored by the Stone Foundation an organization dedicated to the craft history and tradition of stonework. He found stone masonry is often passed down in a family and met some masons who were 13th- or 14th-generation craftsmen.

McGraw says he was happy to find others who were as passionate about building as he was.

He found himself increasingly drawn to ancient building techniques.

When Wilmington Municipal Golf Course approached him and asked if he could construct a pair of bridges similar to the famous 700-year-old Swilcan Bridge on The Old Course at St. Andrews in Scotland he didn’t hesitate.

“I’m not a golfer but a golf fan ” says McGraw who is also of Scottish descent.

To start the complex process a wooden arch was built and then covered with wedged stones. Then flat stones were placed to create the pillars and floor.

Once the bridge was finished the wooden arch was pulled out from underneath it. Two concrete abutments in each side of the bridge help gravity hold the stones together for a little added support against the shifting sandy soil. The abutments are held by pillars buried 12 feet deep in the ground surrounding the creek.

The stones themselves are also special because each one is recycled from the city — old granite curbs and cobblestones reclaimed from beautiful downtown and surrounding areas of Wilmington. Each stone has a unique story and history much like the method of building the bridges is a history itself. A particularly huge boulder stands out near the middle of one bridge. Granite pieces vary in color. There’s a faded red most likely from a no-parking zone a sky blue probably from a handicap area and bright yellows from caution zones.

Louise McColl a member of the board of directors for the golf course loves the new additions to the course. She was the member who approached McGraw with Wilmington City Councilman Charlie Rivenbark’s idea to add stone bridges.

“They make the course look better and are fun to ride over and knowing you had a small part in this makes you proud ” McColl says.

McGraw says the new structures at the golf course are his biggest undertaking since starting his company in 1999. He and team members Mike Mandato and A.J. Schackman worked tirelessly over 10 weeks in the sweltering heat of summer.

Though McGraw admits his excitement for these bridges has exceeded that for most of his other work there are more projects he’s particularly fond of. In one of the slower times in his business he decided to work on something in his own yard. Using riprap rock like that found on the coast at Fort Fisher he created a beautiful curved snake-like border around his trees.

He says he’d like to do more with riprap. It proved to be difficult with its popcorn-like shape (he decided to grind it down to work more like gravel). But it was more satisfying than resorting to fake stone.

When using fake stone “I feel like I’m just decorating ” he jokes.