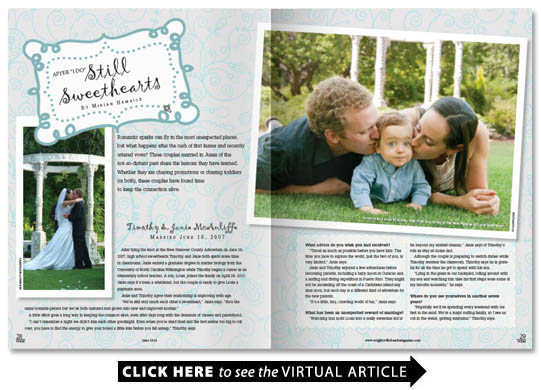 Romantic sparks can fly in the most unexpected places but what happens after the rush of first kisses and recently uttered vows? Three couples married in Junes of the not-so-distant past share the lessons they have learned. Whether they are chasing promotions or chasing toddlers (or both) these couples have found time to keep the connection alive.

After tying the knot at the New Hanover County Arboretum on June 16 2007 high school sweethearts Timothy and Janie both spent some time in classrooms. Janie earned a graduate degree in marine biology from the University of North Carolina Wilmington while Timothy began a career as an elementary school teacher. A son Louis joined the family on April 29 2013. Janie says it s been a whirlwind but the couple is ready to give Louis a playmate soon.

Janie and Timothy agree their relationship is improving with age.

We re still very much each other s sweetheart Janie says. He s the same loveable person but we ve both matured and grown into new and improved models.

A little effort goes a long way in keeping the romance alive even after days long with the demands of careers and parenthood.

I can t remember a night we didn t kiss each other goodnight. Even when you re dead tired and the bed seems too big to roll over you have to find the energy to give your honey a little kiss before you fall asleep Timothy says.

What advice do you wish you had received?

Travel as much as possible before you have kids. The time you have to explore the world just the two of you is very limited Janie says.

Janie and Timothy enjoyed a few adventures before becoming parents including a baby moon in Curacao and a surfing and diving expedition in Puerto Rico. They might not be snorkeling off the coast of a Caribbean island any time soon but each day is a different kind of adventure for the new parents.

What has been an unexpected reward of marriage?

Watching him mold Louis into a really awesome kid is far beyond my wildest dreams Janie says of Timothy s role as stay-at-home dad.

Although the couple is preparing to switch duties while Timothy reenters the classroom Timothy says he is grateful for all the time he got to spend with his son.

Lying in the grass in our backyard rolling around with my son and watching him take his first steps were some of my favorite moments he says.

Where do you see yourselves in another seven years?

Hopefully we ll be spending every weekend with our feet in the sand. We re a major surfing family so I see us out in the water getting sunburns Timothy says.

Despite a near-disaster during Jeoffrey s proposal in which the ring was almost swallowed by the Atlantic Ocean you could say things are going smoother now for the Nathans. The couple is happily married with a 2-year-old son Hugh and a second son on the way and although three businesses keep them spread thin finding time to connect is a priority. It would not work for everyone but Catherine says she loves working with her husband.

We re really lucky to get to work together but it goes seven days a week and that can be challenging Catherine says.

They make it a priority to spend time as a couple and as a family every day.

The boat is where we decompress. We ll ride out and take a walk on Masonboro Island Jeoffrey says.

Even though the added role of parent can be demanding Catherine says it keeps her outlook positive.

When you hear a little kid giggling it s hard to be stressed about anything. It puts everything in perspective she says.

How did you know it was the right time to start a family?

There is never really a right time Catherine says. We plan on always staying busy. We thought it would be a good time if not the right time in 2011. Our business had grown and we felt really lucky.

Does your spouse have a quirk you ve learned to accept?

My husband is the neat freak of the two of us. I hate complaining about it but he loves picking up after me and I m always looking for the things he has put away Catherine says. It s a good problem.

Where do you see yourselves in another six years?

On the boat sailing around the world Jeoffrey says. New Zealand is his top choice but he thinks his sons would like the Panama Canal.

[Hugh] would love to see all the tankers Jeoffrey adds. Catherine agrees but suspects those days might be further down the road. I d love to be sailing around the world but I don t know if that s going to happen in six years. Maybe 15 she says.

David and Joanna are self-professed workaholics. They focused on professional goals during the first few years of their marriage assuming the role of students in addition to newlyweds. David pursued an MBA while Joanna earned a graduate degree and certification from the National Board for Professional Teaching Standards. During those busy times they learned how to ground one another. Sometimes it is as easy as stepping away from computer screens to walk the dog but sometimes it takes more.

It has become a lifesaving skill as the couple faces an obstacle on their quest to start a family. Joanna and David discovered they are both cystic fibrosis carriers.

We are both focused on starting a healthy family. It s been a difficult journey but it is really important for both of us Joanna says.

The challenge has only brought Joanna and David closer.

Obviously that is very nerve-wracking news but it goes back to having a good relationship. It has only brought us closer together David says.

Do you ever return to Wilmington and Wrightsville Beach?

Joanna and David live in Matthews near Charlotte but they frequently travel home to spend time with family.

We re close so we go back and reminisce. We ve been to Airlie Gardens a couple times since we got married. We love to go during Christmas Joanna says.

What has been an unexpected challenge in your marriage?

We ve learned you can work as hard as you want but that doesn t mean everything will turn out the way you planned. The question becomes how do you deal with the curveballs? Joanna says. For Joanna and David it can be as simple as getting away together to walk the dog or as difficult as determining when to give each other space. The couple has developed a good intuition for those moments.

Where do you see yourselves in another six years?

Joanna says she hopes for a healthy family — she sees three kids as an ideal family size. David agrees but he ll be happy as long as Joanna is in the picture.

I m hopeful we ll have little kids running around the house but having Joanna by my side is really all I could ask for David says.