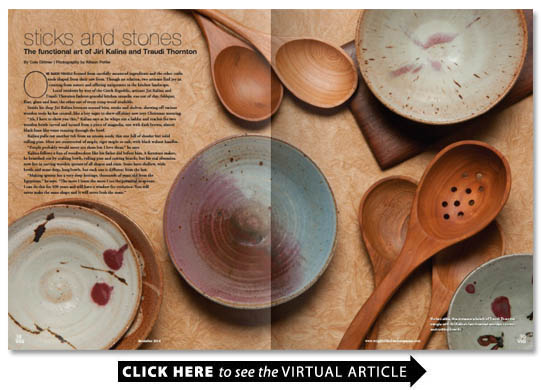 One bakes vessels formed from carefully measured ingredients and the other crafts  tools shaped from their raw form. Though no relation two artisans find joy in   creating from nature and offering uniqueness in the kitchen landscape.

Local residents by way of the Czech Republic artisans Jiri Kalina and Traudi Thornton fashion graceful kitchen utensils; one out of clay feldspar flint glaze and heat the other out of every scrap wood available.

Inside his shop Jiri Kalina bounces around bins nooks and shelves showing off various wooden tools he has created like a boy eager to show off shiny new toys Christmas morning.

Ah I have to show you this Kalina says as he whips out a ladder and reaches for two wooden bowls carved and turned from a piece of magnolia one with dark brown almost black lines like veins running through the bowl.

Kalina pulls out another tub from an unseen nook this one full of slender but solid rolling pins. Most are constructed of maple tiger maple or oak with black walnut handles.

People probably would never use these but I love them he says.

Kalina follows a line of woodworkers like his father did before him. A furniture maker he branched out by crafting bowls rolling pins and cutting boards but his real obsession now lies in carving wooden spoons of all shapes and sizes. Some have shallow wide bowls and some deep long bowls but each one is different from the last.

Making spoons has a very deep heritage thousands of years old from the Egyptians he says. The more I learn the more I see the potential in spoons. I can do this for 100 years and still have a window for evolution. You will never make the same shape and it will never look the same.

Part of Kalina s commitment to crafting utilitarian wooden tools lies in his love for the forest. That love took root when he was a young boy walking through the woodlands of his native Czech Republic.

Growing up in Czech Republic by the time I was about 4 or 5 years old I was in the forest all day long Kalina says. The forest is just my destiny probably. I cherish all simple things all the time so the forest is the right setting for me.

No matter what state the material is in he begins by drawing out a template and cutting a rough outline with his band saw. The piece is then whittled and carved down to the desired shape by hand which requires dunking each piece in water several times to raise the wood s grain.

The direction the grain flows is important for integrity and strength with the optimal direction being a flow lengthwise down the spoon. When it comes to hollowing out the spoon s bowl Kalina is careful to scoop it out sideways across the grain and never from the front or back so as to not pull the grain.

The finished product is a finely sanded and polished work of functional art which finds its way into decorative jars more than pots and pans.

I found out that about 80 percent of the people don t cook with them; they have a jar they put the spoons in which is fine he says. I am really happy with the status of my spoons but now I say Please cook with this.

Eventually Kalina says he would like to transition to crafting spoons from green wood meaning wood that has not dried out and can be found in its natural state like a branch or log versus cut and milled lumber. The impetus for the shift is the availability of the material which would often be free and the moisture retained inside the wood provides lubrication that makes carving easier.

When one spoon is finished Kalina is ever eager to move to the next one knowing it will be completely different. Although he plans to continuously refine and change his process Kalina knows he has found his niche in life.

The competitive spirit has always been something inside that needs to be expressed and haunts me to never just do the status quo and to do something that can always move you he says. I am glad to have found my way because you are born you die and in between you must find something that is reasonable for you in your existence. I have found my niche and found what I want in life and I don t need anything else.

That same peace of mind and contentment with one s own self is also evident in the life of Traudi Thornton. Born in Czechoslovakia she was reared in Germany.

In the Wilmington home in which she has lived for 31 years Thornton s Raku and stoneware pottery is ever present. The colorful fine art Raku pieces sit decoratively on the shelves of the living areas while her handmade mugs plates and bowls fill the kitchen s cupboards.

After training at Creighton the University of Nebraska Omaha and moving back to Germany Thornton relocated to Wilmington in 1983.

Thornton wakes precisely at 4 am to work a few hours before her rescue dog Silas and cat interfere with her productivity.

I don t like to rush or anything I like to take my time and do it properly she says. If I got up at 6 am the dog would get up and then he would pester me and then the cat would come home from whatever he does out there.

One of the aspects of pottery that appeals to Thornton is controlling each step of the process mixing dry clay flint feldspar and kaolin with water.

You can control everything from start to finish. I mix my own clay but you have to be accurate because one percent of too much throws it off she says.

Standing among a field of her finished work she picks up a few of the larger bowls to tap the rims filling the room with a melodic tone not unlike the church bells that ring regularly throughout her neighborhood.

The rim holds the whole thing together and they all make different sounds Thornton says. Bells are actually fashioned in a similar way � they are like a gigantic bowl.

In addition to the bowls rows of mugs plates serving dishes teapots and teacups populate the space each different in some way whether it be a slight color variation or manipulation of the shape.

Standing among her work Thornton reflects on how she thought about becoming a metalsmith at one point but preferred the medium of soft clay she can manipulate and build to construct any shape she wants. Like Kalina with wood Thornton was also drawn to her craft by the renewable and seemingly unlimited supply of the naturally occurring elements of clay.