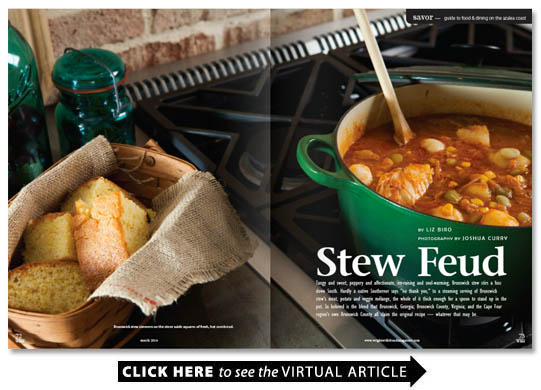 Tangy and sweet peppery and affectionate ire-raising and soul-warming Brunswick stew stirs a fuss down South. Hardly a native Southerner says no thank you to a steaming serving of Brunswick stews meat potato and veggie melange the whole of it thick enough for a spoon to stand up in the pot. So beloved is the blend that Brunswick Georgia; Brunswick County Virginia; and the Cape Fear regions own Brunswick County all claim the original recipe — whatever that may be.

Most cooks below the Mason-Dixon line agree that a Brunswick stew pot should include corn potatoes lima beans and tomatoes. From there debates flare.

Some folks prefer their Brunswick stew more sweet than sharp. Others mull over black pepper versus cayenne pepper. Discussions drag around a thin or thick consistency. Georgians like their Brunswick stew in a bowl; North Carolinians prefer it as a side dish to pulled pork or fried chicken.

While champion Brunswick stew makers use chicken pork beef or a combination of two or all three purists roll their eyes. Squirrel is the choice for true Brunswick stew theyll say — unless youve trapped a raccoon or opossum.

The mystery arises out of the fact that just about everyone who claims to know the true secret of Brunswick stew disagrees about what the secret is author Wilber W. Caldwell writes in Searching for the Dixie Barbecue: Journeys Into the Southern Psyche (Pineapple Press 2005). Indeed it would appear that there is not just one secret but even tens of thousands of secrets at least one for every Southerner who makes the stuff.

When asked about his own Brunswick stew experiences Wilmington chef Larry Casey suggests that all those secrets may boil down to growing up dirt poor and making do.

When I was a kid we normally put whatever in it says Casey who serves his Brunswick stew at Caseys Buffet Barbecue and Home Cookin restaurant on Oleander Drive in Wilmington. His stew is far different from the one he preferred as a kid growing up in New Bern North Carolina.

Me and my cousin trapped raccoons and sold them in a [Brunswick] stew its absolutely perfect he says.

His memories sum up cause for the great Brunswick stew debate. Like Casey many Southerners recall homespun concoctions full of foods their families raised and hunted.

That it seems is how Brunswick stew was invented.

Although Brunswick Georgia residents claim their town created the stew and some folks in Brunswick County North Carolina think the dish surely dates to the former colonial port there named Brunswick Town food historians tend to give credit to Brunswick County Virginia where early 1800s slave and hunting camp cook James Uncle Jimmy Matthews was known for his fine squirrel stew. He slow-cooked the meat on the bone with bacon onions butter and a crumbled loaf of stale bread for a thick stew so rich it was renowned in his community.

Vegetables came later perhaps in the version Haskins who is said to have embellished Matthews recipe made famous at an 1828 rally for Andrew Jackson.

As with most American dishes Brunswick stew seems an amalgamation of influences. For example the corn and lima beans bring Native American succotash to mind.

It seems safe to say that Indians were making stews with wild game long before any Europeans arrived and in that sense there was Brunswick stew before there was a Brunswick the late Southern cuisine authority John Egerton wrote in Southern Food: At Home On the Road In History (Alfred A. Knopf 1987).

When I was a kid I didnt know anything about it except we cooked it and we loved it Casey says.

Brunswick stew tastes good no matter the version and that seems to be the sole consensus. Caseys sweet black peppery version with corn lima beans green beans tomatoes pork and chicken lands on the Caseys Buffet specials board every Thursday and most other days of the week due to high demand.

Caseys Brunswick stew set the standard for the recipe that chef Scott Grimm would then develop for Dockside Restaurants menu. After growing up on Brunswick stew in Raleigh and sampling Caseys Grimm raised the bar. He saut�ed onions carrots and celery; added garlic thyme and cayenne pepper apple cider vinegar and homemade barbecue sauce. Corn tomatoes and lima beans went in along with braised pork and grilled chicken breast.

Its one of those recipes you can kind of tweak and do what you want says Grimm now a chef at Pembrokes in Wilmington.

Oren Knicely of Shallotte N.C. has won the December Brunswick County Chamber of Commerce Brunswick stew cook-off two times for sure. Maybe more. I believe its three. I cant remember he says.

Knicely emphasizes that what you want depends on whom youre cooking for. He also competes in the Brunswick Georgia Brunswick stew cook-off where he alters his secret recipe to suit Georgian tastes.

In Georgia Knicely says They use pulled pork pulled chicken and its real thick I mean tremendously thick. Basically its got a vinegar flavor.

For North Carolinians Knicely uses smoked pork brisket and chicken breast in a stew of onions tomatoes okra potatoes carrots lima beans and creamed corn. Its a little spicy Knicely says. When youre eating it its got just a little bit of sweet then the heat kicks in.

Knicely thinks all Brunswick stew cooks should strive for one thing: The paddle youre stirring with should stand up [in the finished stew] without a problem — freestand.

Wilmington chef James Doss grew up in Goldsboro recognized by many as North Carolinas Eastern Carolina-style pulled pork barbecue capital. As a result Doss has eaten his share of Brunswick stew as a side dish to pulled pork possibly served as such because Brunswick stew is a way to use excess pork and fried chicken.

Despite his Brunswick stew pedigree when Doss talks ideas for his Wilmington Rx and Pembrokes restaurants he envisions neither soupy nor thick — and definitely not squirrel.

Maybe a deconstructed thing Doss says where you have the butter beans and corn with a pork chop and the Brunswick stew flavors in the background; or maybe with grilled chicken or a grilled pork chop or braised and pressed pork belly stewed butter beans and fresh heirloom tomato sauce.

My mom and my aunts always had tomatoes that had been cooked and canned in the pantry Larry Casey says as well as corn and green beans etc. canned in the pantry and freezer. Making Brunswick stew was definitely a means of stretching the protein. We would often put some in the freezer as well. As a result this recipe makes a lot of Brunswick stew. Here Casey suggests chicken but he said pulled pork barbecue would be delicious too.

Put chicken in the pot cover with water and bring to a boil. Reduce heat to low and slowly simmer chicken until cooked about 1 hour. Remove chicken from pot and set aside to cool. Reserve stock.

Place the onions and potatoes in a large stock pot. Add salt pepper and butter. Cover vegetables with the stock produced from cooking the chicken. Place the pot over high heat and bring contents to a boil. Reduce heat and simmer until a fork easily pierces the potatoes.

Crush the tomatoes by hand and add them to the pot.

Pull the chicken from the bone. Add the meat to the pot along with lima beans corn and green beans. Simmer stew over low heat for about 2 hours. Stir in Texas Pete hot sauce and sugar.

Simmer chicken in a large pot with water and salt until tender about 2 hours. Drain off and set aside the broth. If you are fat- and cholesterol-conscious remove skin from chicken and discard. Remove flesh from bones and cut or shred chicken into tiny pieces. Set chicken aside. Pour broth into a big pot and reduce to 2 cups. If you have decided to add potatoes add them to the pot and cook 10 minutes. Add beans tomato sauce and onions and cook 20 minutes. Add chicken and remaining ingredients and cook 15 to 20 minutes more or until vegetables are tender.