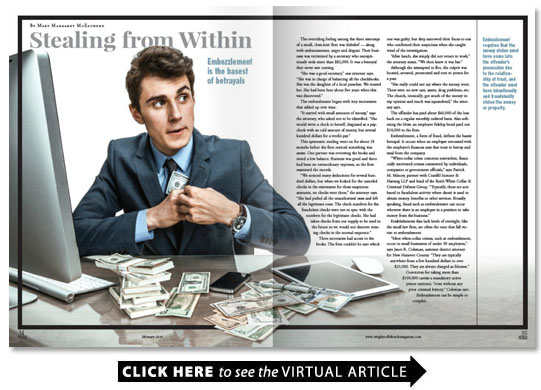 The overriding feeling among the three attorneys of a small close-knit firm was disbelief — along with embarrassment anger and disgust. Their business was victimized by a secretary who surreptitiously stole more than $82 000. It was a betrayal they never saw coming.

“She was a good secretary ” one attorney says. “She was in charge of balancing all the checkbooks. She was the daughter of a local preacher. We trusted her. She had been here about five years when this was discovered.”

The embezzlement began with tiny increments that added up over time.

“It started with small amounts of money ” says the attorney who asked not to be identified. “She would write a check to herself disguised as a paycheck with an odd amount of money but several hundred dollars for a week’s pay.”

This systematic stealing went on for about 18 months before the firm noticed something was amiss. One partner was reviewing the books and noted a low balance. Business was good and there had been no extraordinary expenses so the firm examined the records.

“We noticed many deductions for several hundred dollars but when we looked for the canceled checks in the statements for those suspicious amounts no checks were there ” the attorney says. “She had pulled all the unauthorized ones and left all the legitimate ones. The check numbers for the fraudulent checks were not in sync with the numbers for the legitimate checks. She had taken checks from our supply to be used in the future so we would not discover missing checks in the normal sequence.”

Three secretaries had access to the books. The firm couldn’t be sure which one was guilty but they narrowed their focus to one who confirmed their suspicions when she caught wind of the investigation.

“After lunch she simply did not return to work ” the attorney states. “We then knew it was her.”

Although she attempted to flee the culprit was located arrested prosecuted and sent to prison for a year.

“She really could not say where the money went. There were no new cars assets drug problems etc. The church ironically got much of the money in my opinion and much was squandered ” the attorney says.

The offender has paid about $40 000 of the loss back on a regular monthly ordered basis. Also softening the blow an employee fidelity bond paid out $10 000 to the firm.

Embezzlement a form of fraud defines the basest betrayal. It occurs when an employee entrusted with the employer’s finances uses that trust to betray and steal from the company.

“White-collar crime concerns nonviolent financially motivated crimes committed by individuals companies or government officials ” says Patrick M. Mincey partner with Cranfill Sumner & Hartzog LLP and head of the firm’s White Collar & Criminal Defense Group. “Typically these are acts based in fraudulent activity where deceit is used to obtain money benefits or other services. Broadly speaking fraud such as embezzlement can occur wherever there is an employee in a position to take money from the business.”

Establishments that lack levels of oversight like the small law firm are often the ones that fall victim to embezzlement.

“Most white-collar crimes such as embezzlement occur in small businesses of under 30 employees ” says Janet R. Coleman assistant district attorney for New Hanover County. “They are typically anywhere from a few hundred dollars to over $25 000. They are always charged as felonies.”

Conviction for taking more than $100 000 carries a mandatory active prison sentence “even without any prior criminal history ” Coleman says.

Embezzlement can be simple or complex.

“The most common cases are probably basic embezzlement frauds where employees are stealing from their employers ” Mincey says. “It can be as simple as an employee working the cash register skimming a dollar or two throughout a shift. Or it can be an elaborate scheme to divert money away through fake services and kickbacks.”

Embezzlement requires that the money stolen must have come into the offender’s possession due to the relationship of trust and the offender must have intentionally and fraudulently stolen the money or property.

That happened at the University of North Carolina Wilmington’s School of Social Work during the 2016-17 school year when a student leader was caught stealing $4 500 from a bank account belonging to a student group.

The embezzlement was discovered when the student overdrew the account.

“There was anger against the student for doing it then concern for the student. Why would she do this?” says Stacey Kolomer director of the School of Social Work. “It was an interesting experience. Talking to campus police they said ‘You are not the first one.'”

The student paid back the money as part of a plea bargain to reduce the charge from a felony to a misdemeanor. The student club had its funds restored but the embezzler has a permanent scar on her record.

“Some people might have felt very betrayed by it but my bigger concern is why would someone jeopardize their future for something so little?” Kolomer says. “For $4 500 she’s made it almost impossible to get a job now.”

One such case involved Guy Robert Williams who pleaded guilty to 17 counts of embezzlement in December 2015 and was sentenced to several years in prison for stealing more than $400 000 from Wilmington Plastic Surgery. He used the money for a birthday party for his daughter on Bald Head Island home renovations and vacations.

“We believe that more may have been taken but simply could not prove it so it was not part of the ultimate plea arrangement ” she says.

Proof of embezzlement is often elusive making these cases challenging to prosecute.

“More than one person may have access to the money and the business may not have a system in place such as cameras clear deposit records etc. ” Coleman notes. “We must prove how much was taken how it was taken how we know it was this defendant. That requires bank records business records all of which are often difficult for non-business people to understand and difficult to present as evidence. And often businesses are reluctant to provide their records as it might disclose proprietary information that they do not want accessible to the public. Once a document is introduced into evidence it becomes public record and many businesses are not comfortable with this concept.”

Wilmington Plastic Surgery was vocal about the case at the time urging businesses to take preventive measures and to be proactive if they suspect an employee is stealing. But often embezzlement victims are reluctant to discuss their experiences.

“The victims are embarrassed by what has happened and don’t want their plight to be publicized ” Coleman says.

Law firms real estate agents and companies banks and other businesses entrusted with others’ money have a higher stake. The bodies governing these professionals take a harsh stand against them when money held in trust is improperly appropriated. The liability is strict and the fact that criminals victimized them is irrelevant. Attorneys can be disbarred for the criminal actions of their employees against their client trust accounts.

The law firm discussed earlier was fortunate. Even though the culprit in the case had access to the client trust accounts she knew not to take money from them.

Embezzlement can involve misappropriation of property other than funds. Such was the case of Meghan Elizabeth Shuford a nurse who was arrested in 2016 and charged with stealing controlled substances from New Hanover Regional Medical Center.

“People who do these types of crimes are smart and ingenious ” Coleman says. “I know of one case where a local law firm had an employee stealing large amounts by use of a postage meter.”

Any business or employer can be at risk for embezzlement.

“Wherever there is money changing hands humans will be tempted to steal it ” Mincey says. “For example [in August] the Department of Justice announced a takedown of over 412 individuals nationwide in connection with medical providers fraudulently billing Medicare more than $1.3 billion. This is a niche area which the federal government has really ramped up in recent years. Hospitals medical clinics and any provider accepting Medicare patients have to be increasingly vigilant to ensure their billing practices are compliant.”

Embezzlement damages so much more than the bottom line. It is a betrayal of the sacred trust between employer and employee. In small businesses it can feel like being betrayed by a trusted family member.

“Defendants’ motives vary a great deal ” Coleman says. “Overall I would say they are often motivated by their own financial problems. They run short one month see an easy way to take money without being caught get away with it and they start taking more and more. They almost always start small and work their way up to larger and larger sums. They begin to see it as a game to keep upping the ante without getting caught.”

Coleman says businesses are slow to act when they suspect an employee because they do not want to jump the gun and accuse someone wrongfully when the suspected stealing incident was an honest mistake.

Prevention starts with the hiring process and businesses must be proactive and remain vigilant from the beginning.

“When you hire someone who has access to your business accounts the first thing you should do is run a criminal history ” Coleman recommends. “Surprisingly many employers still don’t do this. Often the embezzler has been charged with similar things in the past and had the charges dismissed or even been convicted of something similar. Check their social media accounts and posts. What do they do in their spare time? Do they appear to live above their means?”

Coleman also recommends monitoring the activity of any employees with access to company funds.

“Many of these cases occur because the employer/business owner is simply too trusting ” she says. “They don’t look at their bank accounts credit card statements business books etc. It’s frustrating to business owners because you can’t allow someone to have unfettered access to your business without supervision. This is your money and only you can protect it and prevent or at least minimize it being taken from you.”

For the small law firm victimized by an embezzler there was a silver lining.

“We changed our accounting procedures after this experience ” the attorney says. “We personally review all monthly bank statements before and after they are reconciled. I know every day how much is in the office account and view it daily to be sure we are in good shape. Before I simply relied on [the culprit]. After it happened it actually had a positive effect on all of us as we interacted with each other. We trusted each other felt betrayed and later united.”