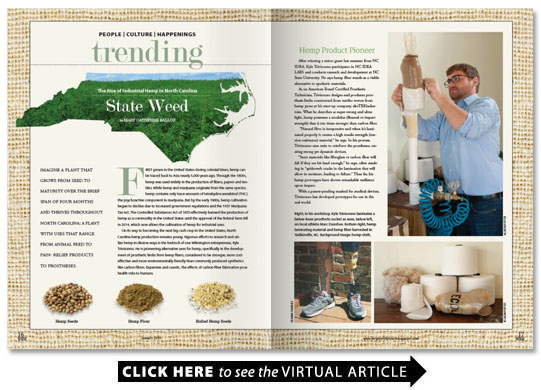 Imagine a plant that grows from seed to maturity over the brief span of four months and thrives throughout North Carolina; a plant with uses that range from animal feed to pain- relief products to prostheses.

First grown in the United States during colonial times hemp can be traced back to Asia nearly 5 000 years ago. Through the 1800s hemp was used widely in the production of fibers papers and textiles. While hemp and marijuana originate from the same species hemp contains only trace amounts of tetrahydrocannabinol (THC) the psychoactive component in marijuana. But by the early 1900s hemp cultivation began to decline due to increased government regulations and the 1937 Marijuana Tax Act. The Controlled Substances Act of 1970 effectively banned the production of hemp as a commodity in the United States until the approval of the federal Farm Bill in 2014 which now allows the cultivation of hemp for industrial uses.

On its way to becoming the next big cash crop in the United States North Carolina hemp production remains young. Vigorous efforts to research and utilize hemp in diverse ways is the bedrock of one Wilmington entrepreneur Kyle Trivisonno. He is pioneering alternative uses for hemp specifically in the development of prosthetic limbs from hemp fibers considered to be stronger more cost-effective and more environmentally friendly than commonly produced synthetics like carbon fibers. Expensive and caustic the effects of carbon fiber fabrication pose health risks to humans.

As an American Board Certified Prosthetic Technician Trivisonno designs and produces prosthesis limbs constructed from textiles woven from hemp yarns at his start-up company ekoTEK industries. What he describes as super-strong and ultra-light hemp possesses a modulus (flexural or impact strength) that is ten times stronger than carbon fiber.

“Natural fiber is inexpensive and when it’s laminated properly it creates a high tensile strength (tension resistance) material ” he says. In his process Trivisonno uses resin to reinforce the prostheses creating strong yet dynamic devices.

“Inert materials like fiberglass or carbon fiber will fail if they are hit hard enough ” he says often resulting in “spiderweb cracks in the lamination that will allow in moisture leading to failure.” Thus far his hemp prototypes have shown remarkable resilience upon impact.

With a patent-pending marked for medical devices Trivisonno has developed prototypes for use in the real world.

Marc Dunshee a local runner and amputee who regularly competes in marathons utilizes Trivisonno’s prostheses during everyday activities as well as trainings and competitions. This includes a prosthetic blade which Dunshee uses when running on slippery surfaces. With more than 2 000 miles logged on his prostheses Dunshee’s weekly training regimen includes several five-plus mile runs combined with biking to and running on Wrightsville Beach.

“Dunshee is by far the most active amputee in our area and has used this device more than any patient I’ve ever worked with previously in private practice ” Trivisonno says.

In addition to mitigating learning curves Trivisonno aims to save costs for both himself and his clients especially production and healthcare reimbursement costs. He expects the demand for prostheses to increase in coming years mainly due to the rising prevalence of diabetes vascular issues and cancer. With this Trivisonno has a growing demand for hemp fabric. Currently he imports hemp textiles from China where material costs are cheap but shipping costs remain expensive due to tariffs on imported yarn. Ideally he would prefer to use locally grown hemp.

“We have super-strong material all around us ” he says. And with the passage of the state pilot program combined with the increasingly realized benefits of growing hemp it seems natural to produce it on local land.

Another trailblazer in the local hemp industry is Justin Hamilton of Hempleton Investment Group a Wilmington-based company that aims to educate North Carolina farmers about growing hemp and encouraging its production.

“The nice thing is now we’re entering the second season of harvest in North Carolina and it’s no longer a dream this is a reality ” Hamilton says. “I think [Trivisonno] is the perfect example of what you can do with hemp fiber and actually manufacturing a product that is better superior to existing products.”

One environmental benefit of hemp is its suitability for phytoremediation the process of planting a crop on farmland that has been contaminated from over cropping or flooding. Once established Trivisonno explains hemp plants clean the soil with their root system because they possess the ability to draw out bad toxins and leave better minerals in place.

“We can use hemp as a ‘mop crop’ — to mop up those heavy metals and some of the pesticides ” Hamilton adds.

“Plant fiber is renewable and not a skin irritant ” Trivisonno says. “So it’s better for fabricators. The saturation of the fiber also makes the material easier to finish and work with. It will support U.S. agriculture and hopefully bring back a lot of these textile jobs across the state.”