BY By Elizabeth Weaver 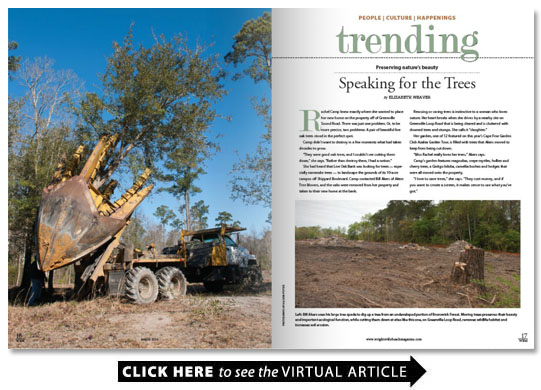 Rachel Camp knew exactly where she wanted to place her new home on the property off of Greenville Sound Road. There was just one problem. Or to be more precise two problems: A pair of beautiful live oak trees stood in the perfect spot.

Camp didn’t want to destroy in a few moments what had taken decades to grow.

“They were good oak trees and I couldn’t see cutting them down ” she says. “Rather than destroy them I had a notion.”

She had heard that Live Oak Bank was looking for trees — especially namesake trees — to landscape the grounds of its 10-acre campus off Shipyard Boulevard. Camp contacted Bill Akers of Akers Tree Movers and the oaks were removed from her property and taken to their new home at the bank.

Rescuing or saving trees is instinctive to a woman who loves nature. Her heart breaks when she drives by a nearby site on Greenville Loop Road that is being cleared and is cluttered with downed trees and stumps. She calls it “slaughter.”

Her garden one of 12 featured on this year’s Cape Fear Garden Club Azalea Garden Tour is filled with trees that Akers moved to keep from being cut down.

Camp’s garden features magnolias crepe myrtles hollies and cherry trees a Ginkgo biloba camellia bushes and hedges that were all moved onto the property.

“I love to save trees ” she says. “They cost money and if you want to create a screen it makes sense to use what you’ve got.”

She also was the landscape designer for the adjacent house and land originally owned by her son Hugh MacRae III and now home to her niece. She had Akers move cedar and other trees and shrubs to fill empty spaces and create screens.

“There was nothing in here ” she says. “We created a garden.”

Camp estimates that she and Akers have moved 70 trees.

“It’s a lot of fun watching Bill move the trees ” she says.

Moving trees is Akers’ business but preservation is his motivation. He has hundreds of uprooted trees at his location in Castle Hayne just waiting for new homes.

“I call it my rescue nursery ” he says. “We save trees from construction when houses are being torn down. A lot of trees get saved that way.”

On March 18 he donated and planted a rescued 15-year-old live oak at Forest Hills Elementary in an early Arbor Day celebration.

“These little ones are going to grow up one day and they’re going to need to know that ‘Hey we can save some trees we don’t have to cut them down we can move them ‘” Akers says.

He got started in the tree-saving business almost by accident he says. He was laid off after 30 years when the DuPont plant closed and was “selling Beanie Babies at flea markets” when he was hired to operate the truck for a company moving trees at Eagle Point Golf Club.

Akers loved the thought of saving trees and with the help of Tony Parker from Classic Landscapes began buying specialized equipment. He launched the business 16 years ago.

“It was nothing but the good Lord done this ” he says.

His equipment now includes five tree spades of various sizes including one with a 102-inch blade which can dig up and transplant trees with a 12-inch diameter trunk. But if there’s something larger that needs to be saved he’ll find a way.

“The largest tree we have moved was a hand-dug 21-foot oak that had to be moved with a 165-ton crane ” Akers says. “That day we relocated a 14-foot and a 21-foot oak at the parking deck beside the New Hanover Public Library. More recently we moved a 14- and a 17-foot live oak from Seagate to Live Oak Bank. That required hand digging boxing cranes lowboys and police escorts to get them to their new homes.”

Sandy Wood owner of Habitats landscape company also places a high value on preserving trees. She says they are worth the investment of the cost of moving them which can run anywhere between $200 and $2 000 based on the hours of labor rather than the size of the tree.

“I’ve been replanting since 1992 and relocating trees on site to save them ” Wood says. “People were destroying them so we did something about it. Why would we destroy what’s taken nature years to create? You don’t get that back.”

Much like homeowners pack up and move their favorite belongings when relocating sometimes with a written agreement they can also move the magnolia tree that the kids climbed on after finishing their homework or the weeping willow that shades a beloved pet’s grave.

“They can put it in the contract [when selling a house] that a certain tree is to be moved ” Akers said. “I moved one for a lady that was her granddaughter’s tree. She planted it when her granddaughter was born. When she moved the tree had to go with her.”

Even if there is not sentimental value planting rescued trees can benefit homeowners and developers. Mature trees provide more immediate benefits than new seedlings.

“It is important for the environment as much as aesthetically ” Akers says. “We have lost so much of the old-growth canopy in this area. Not only does moving or adding trees beautify the property but it adds value.”

The Arbor Day Foundation says trees planted around buildings can provide shade and reduce air conditioning needs by 30 percent as well as mitigate runoff and erosion. Being tree smart can add value to the property help cool the home supply clean air and provide habitats for backyard wildlife.

“It’s important for homeowners to know about these services ” Wood says. “We need to save all the trees we can.”

Some builders and architects are part of the movement to preserve trees including Michael Kersting of Kersting Architecture who was able to preserve some live oaks during the construction of the Medac Building on Market Street.

“They were such nice trees it was such a shame to cut them down ” he says. “We tagged the trees that were of proper size and made a nursery. Then we moved them [when the building was finished]. They make shade for the parking lot there. We probably saved 20 to 30 trees that way.”

Kersting and his wife Pam also had Akers relocate a tree onto personal property at their home.

“I would encourage people to consider moving trees. It’s a great way to save them ” he says.