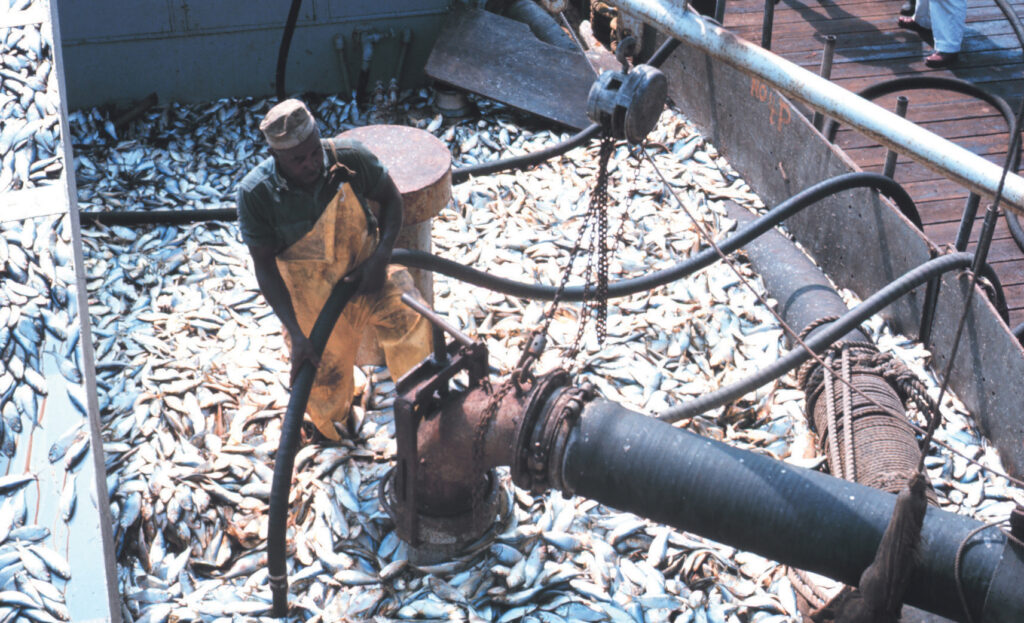 “Fish!” shouted the captain as the H.W. Anderson’s powerful 500-horsepower twin diesel engines roared to life. High above the ship, a bright green Piper Super Cub spotter plane, brilliant against a cloudless azure sky, descended in a tight bank, circling low over the shimmering purplish mass drifting slowly down the coast below.

Earlier that morning, as the sun rose above a cool, flat sea, the Anderson had sailed from Southport. She had been on site for two hours, patiently idling just off the coast of Bald Head Island, when suddenly the ship’s VHF radio broke the silence, spitting and crackling the message every menhaden captain hoped for.

The dark, purplish blotch Watters had seen from the air was indeed a massive school of menhaden, a football field in length. On board the 100-foot converted World War II minesweeper were 24 strong crewmen and two 30-foot purse boats that would launch from her stern when the vessel reached the school. The crew’s pay was dependent on their catch, so anticipation was high as the ship raced full throttle toward the fish.

In 1960, the commercial menhaden industry was the largest of all fisheries in the United States with a recorded catch of over 1 million tons. The majority of the catch came from East Coast ports such as Southport.

Menhaden, known locally as pogies, live in estuaries and warm coastal waters. As the waters cool during the fall, the species migrates to the ocean and moves along the coast in mammoth schools pulsing with millions of fish.

Menhaden have been sought after since colonial times as raw material for fertilizer, oils and supplements. Critical to the Atlantic Ocean food chain, the small fish are prey for numerous natural predators including channel bass, striped bass, tuna, trout, dolphins, eagles and ospreys.

The Southport menhaden fishery was active most of the year, but the autumn months were spectacular.

The Standard Products Fleet, which owned the Anderson, used commercial purse seines to catch menhaden. A mainstay of the menhaden fleet, the purse seine in 1960 was made of cotton mesh about 1,000 feet long with a depth of around 50 feet.

The typical Standard Products Company ship was a vessel over 100 feet referred to as the mother ship that carried two smaller purse boats of some 30 feet each. The usual fishing crew was 24 able-bodied men with 10 men each on the purse boats and the remainder on the mother boat.

When menhaden were spotted from the air, the boat, led by the pilot’s VHF radio, would rally to intercept the school. The spotter would direct the net deployment, known as the set, depending on the wind, current, and size of the school.

The purse boats, each laden with one half of the net’s length, deployed from the stern of the mother boat. They would move to opposite sides of the school to form an open U shape around the perimeter.

The U was cinched tight by the crewmen, capturing the fish in the “purse.” It took about 30 minutes until the net was closed. Originally the nets were retrieved by hand with backbreaking work from strong seamen, but later mechanical winches performed the task.

The fish were loaded into the mother boat which, when filled, would rush back to the plant in Southport and offload the catch at the Standard Products factory. In 1960, ships were not equipped with refrigeration and stored the catch in uninsulated fish holds. Boats had to operate close to the landing point to prevent spoilage. Most sets occurred within three miles of shore, with the majority being just off the coast of Brunswick County.

Before about 1946, the crow’s nest — a structure in the top part of the vessel’s main mast — was used to spot menhaden schools. When a school was spotted, a dinghy would be deployed with one man aboard to pinpoint the best position for the net. The purse boats would then encircle the school with their seine net and gradually draw the catch alongside the mother ship.

After about 1946, airplanes routinely were used to locate the fish, and the practice of directing the seine around a school of menhaden took place from the air usually by VHF radio communication between the pilot and the captain. An average purse-seine catch in 1960 using spotter aircraft might yield about 10 tons of menhaden.

The life of a menhaden spotter pilot was anything but ordinary. Taking off from tiny, remote airstrips along the coast, the pilots flew into constantly changing weather patterns. The typical eight-hour day could be clear and bright or mixed with fog, rain, or the sudden rush of storm winds that could blow in within minutes.

At twilight, pilots flew back to a precarious landing on narrow strips of grass or remote highways lit only by lavender skies and the fading glow of a distant horizon.

But perhaps no other pilot enjoyed the reputation of Hall Watters. Taking off and landing from Fish Factory Road in Southport or from a narrow grass strip near Carolina Beach, he flew most every morning, scanning the ocean for menhaden.

He wasn’t just any pilot. The sky was his home and the vast stretches from Sunset Beach to Ocracoke were his runways. Slim as a river reed, confident as an eagle, and with unrivaled career experience, Watters was a supreme pilot and outdoorsman.

Don Sellers was one of Watters’ youngest student pilots, taking his first flight with Watters at the age of 5.

“It was on that first flight as a very young boy that two things happened,” Sellers says. “I knew I loved flying and that I would one day become a pilot, and Hall was forever thereafter my mentor, instructor, and dear friend.”

Sellers would later become a spotter pilot for the Brunswick Navigation Company and the Standard Products Company. He also served his country as a decorated combat helicopter pilot in Vietnam, and became a pilot with Piedmont Airlines and USAir.

In his book When Dreams Took Flight, Sellers described takeoff and landing from Fish Factory Road in Southport and doing touch-and-go landings on the CP&L dike across from the fish factory.

“We landed on just about every square foot of sand on Bald Head Island, and I don’t think any other type of pilot ever enjoyed the freedom of flight more than a fish spotter,” he wrote.

Watters logged thousands of hours for Standard Products and in the process experienced many compelling adventures. Through tales told in stories, books and articles, he became a legendary figure famed as chief pilot and champion of the spotter pilots group but also as an avid light tackle fisherman.

As he flew high above the shoreline searching for menhaden, it was only natural that he would occasionally spot his favorite quarry — the giant red drum of the deep surf sloughs. Watters kept a light plugging rod strapped to the strut of his plane, and after the boats made a set, he might be found landing his plane on some remote strand of beach plugging for the big fish.

There is a sense of longing when today’s sportsmen reflect on the places and the gamefish that Watters encountered — speckled trout, giant bluefish, tarpon, and the bull red drum that he cherished and stalked. Kit Taylor is a renowned saltwater fisherman and boat captain who occasionally fished and flew with Watters.

“Hall was a rare breed — an unrepentant, adventurous, fearless pilot who happened to love fishing,” Taylor says. “He literally invented casting a plug for bull red drum, and when he spotted a school he would land his plane right on the beach — right in front of the fish! It didn’t matter how tricky or difficult the approach, he could do a flawless landing and was fishing in minutes.”

Those lonely stretches of beach no longer bear the tracks of Watters’ Piper Super Cub, but his brave and adventurous spirit will always remain there.

The Atlantic Ocean, the Cape Fear River and the Intracoastal Waterway come together at Southport to host one of the most spectacular fishing grounds on the East Coast.

For most of the past century, Southport was a commercial fishing town that thrived on fish, shrimp, and marine life spawned by a vast maze of marshes, waterways, and shoals. Menhaden was king for most of that century and holds a special place in the cultural history of Southport.

The commercial fleets and rendering factories were the primary employment opportunity for many Brunswick County residents and many made their careers in the fishery, some with multi-generational ties.

During the menhaden days, Southport was not the same quaint, charming and picturesque town it is now. Southport not only berthed its diesel menhaden boat fleet near the center of town, but also supported the nearby factories that cooked and processed the fish. The blue smoke billowing from rusting smokestacks produced a pungent aroma that carried as far as Wilmington.

In the 1960s, the noisy factories, wafting smells, aging fleets and rugged sailors remained the commercial lifeblood of the town. But the fishery began to decline, and for the first time in a century the bounty from local and regional waters was in jeopardy.

The fleet, which once left port early in the morning and was usually back before noon with a full load of menhaden, now had to travel much farther at great expense with spotter pilots above to find fish. Controversies grew as environmental groups and recreational fishermen argued that data indicated the menhaden population was declining, particularly among juvenile fish that spend much of their first year in the estuaries.

Faced with a declining fishery, rising costs, antiquated equipment, regulatory pressure, and constant complaints about the prevalent smell, the factories finally closed in the 1980s. Small-scale commercial fishermen had ventured out from Southport to hunt for menhaden decade after decade in the 1900s. But the forces of ever-tightening regulation, powerful competition, and unrelenting coastal development finally ended their proud way of life.

Today, if you look closely down Fish Factory Road in Southport, past the houses, restaurants and stores, the ancient remains of the venerable H.W. Anderson stand watch over the once rutted road and grass strip where spotter pilots launched their dawn flights so many years ago.