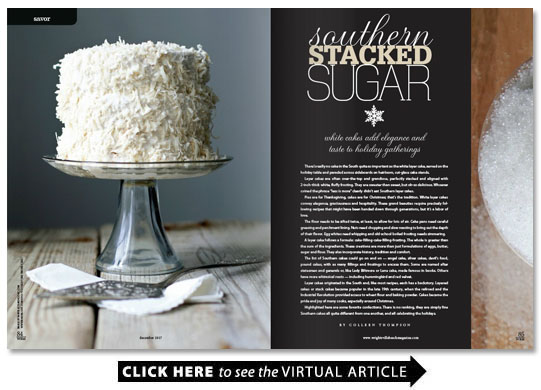 There’s really no cake in the South quite as important as the white layer cake served on the holiday table and paraded across sideboards on heirloom cut-glass cake stands.

Pies are for Thanksgiving cakes are for Christmas; that’s the tradition. White layer cakes convey elegance graciousness and hospitality. These grand beauties require precisely following recipes that might have been handed down through generations but it’s a labor of love.

The flour needs to be sifted twice at least to allow for lots of air. Cake pans need careful greasing and parchment lining. Nuts need chopping and slow roasting to bring out the depth of their flavor. Egg whites need whipping and old-school boiled frosting needs simmering.

A layer cake follows a formula: cake-filling-cake-filling-frosting. The whole is greater than the sum of the ingredients. These creations are more than just formulations of eggs butter sugar and flour. They also incorporate history tradition and comfort.

The list of Southern cakes could go on and on — angel cake silver cakes devil’s food pound cakes with as many fillings and frostings to encase them. Some are named after statesmen and generals or like Lady Biltmore or Lane cake made famous in books. Others have more whimsical roots — including hummingbird and red velvet.

Layer cakes originated in the South and like most recipes each has a backstory. Layered cakes or stack cakes became popular in the late 19th century when the railroad and the Industrial Revolution provided access to wheat flour and baking powder. Cakes became the pride and joy of many cooks especially around Christmas.

Highlighted here are some favorite confections. There is no ranking they are simply fine Southern cakes all quite different from one another and all celebrating the holidays.

A favorite of President Jimmy Carter it is perhaps the doyen of Southern Christmas cakes. The Lane cake is not for the fainthearted. This four-layer white cake makes use of lots of egg whites with the yolks reserved for the thick custard filling spiked with bourbon-soaked raisins and then encased in a white frosting.

More than 100 years ago Emma Rylander Lane of Clayton Alabama won a baking competition at a Georgia county fair with her prize cake. She later published a cookbook “Some Good Things to Eat ” and in it was her recipe for Prize cake (which later became known as Lane cake in her honor).

It became an American icon after appearing in Harper Lee’s “To Kill a Mockingbird.” Miss Maudie Atkinson — the Finches’ neighbor — was known in the fictitious town of Maycomb for her famous Lane cakes.

It’s difficult to find this rich layered cake on menus but Lexi Ginsberg Motta owner of The Cakerie in Birmingham Alabama is a young baker restoring its popularity around Christmas.

Ginsberg Motta’s recipe is based on the recipe by the late Southern cookbook writer Edna Lewis which she has adapted to just three layers instead of four and includes coconut and pecans.

As much a fixture around the holidays as ambrosia and boiled custard — the white-as-snow coconut cake is a classic holiday addition. This rich cake is an elaborate production moistened with coconut syrup each layer slathered with a sweet white coconut cream and finished with a fluffy white frosting dusted with sprinkles of fresh coconut.

The cake first appeared in “The Blue Grass Cookbook ” by Minnie Fox and John Fox Jr. which was published in Kentucky in 1904 and credits a number of the recipes contributed by African-American cooks.

Many restaurants in the Southern United States pride themselves on their coconut cake particularly the Peninsula Grill in Charleston South Carolina. Their 12-layer Ultimate Coconut Cake has its own fact sheet on the restaurant’s website which includes an accolade from The New York Times that called it “a little slice of heaven.”

In the words of Atlanta food writer Angie Mosier “It’s the Dolly Parton of cakes: a little bit tacky but you love her!”

Christmas simply wouldn’t be Christmas in the South without a red velvet cake. A real red velvet is not too sweet and slightly tangy. Moist layers of crimson a subtle hint of cocoa and a buttermilk batter with cream cheese frosting give this cake its distinctive taste.

No one knows exactly when and where red velvet cake originated. Southerners claim it came about during the Civil War but New Yorkers say it was invented in the 1950s at New York’s Waldorf-Astoria.

The dispute might arise because red velvet cake was not born red. The color may seem important today but recipes dating back to the late 1800s make no mention of the color red — velvet was a reference to the texture. Recipes called for the use of cocoa to soften the flour and make the cakes as smooth as velvet.

Chemists bakers and historians still debate whether the dance between cocoa and acid gave the cakes a hint of red. Others believe the name simply came from the brown sugar that was used which was commonly referred to as red sugar.

Red velvet cake showed up in the 1989 Southern-based movie “Steel Magnolias” (based on the stage play by American writer Robert Harling) as an armadillo-shaped groom’s cake with the unmistakable red interior helping it emerge as one of America’s favorites.

Despite the name no hummingbirds are incorporated into this tasty cake. The cake consists of two to three layers of pecans mashed bananas and crushed pineapple covered in cream cheese frosting.

The confection is believed to have originated in Jamaica where it was called Doctor Bird cake after the national bird of the island a colorful swallowtail member of the hummingbird family. The cake was so sweet it could attract hummingbirds. An alternate version says that the cake is so delicious it makes you hum with happiness.

Doctor Bird cake became Doctor Byrd cake in the Southern United States where Byrd was a popular family name and from there became the more generic hummingbird cake we know today.

It has in the past number of years gained celebrity status as Oprah Winfrey’s most requested cake from her personal chef Art Smith. Smith reportedly also made his now- famous hummingbird cake for Maya Angelou’s 75th birthday and says it is the most requested dessert item on the menu at his Chicago restaurant Blue Door Kitchen and Garden.

If ever there were a cake built for elegant gatherings this is it. The grand lady of vintage cakes — baked in the photo above for Wrightsville Beach Magazine by Phyllis Ramsey — is a fluffy white chiffon three-layered dessert that sandwiches a filling of chopped toasted nuts and dried fruit. The layers are wrapped up in old-fashioned boiled frosting — soft and billowing when spread but hardened to a chewy meringue.

It was popularized by novelist Owen Wister. He picked Charleston South Carolina as the setting of his romance novel “Lady Baltimore” and modeled the central character after one of the city’s former belles Alicia Rhett Mayberry. In the novel Lady Baltimore creates a cake called Lady Baltimore and the description sent readers scrambling to find a recipe.

Recipes for the cake started showing up in newspapers. The owners of the Lady Baltimore Tea Room — who might have developed the cake popularized by Wister — picked up on the popularity and started baking and selling large numbers and shipping them across the country.