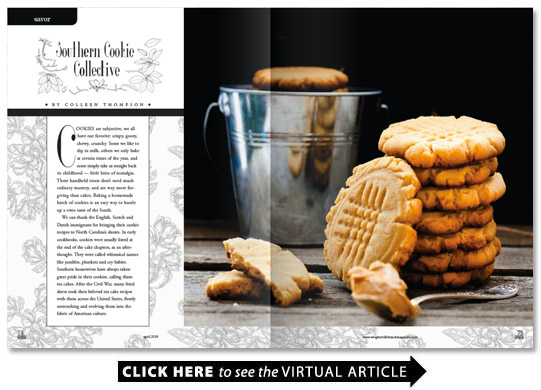 Cookies are subjective we all have our favorite: crispy gooey chewy crunchy. Some we like to dip in milk others we only bake at certain times of the year and some simply take us straight back to childhood — little bites of nostalgia. These handheld treats don’t need much culinary mastery and are way more forgiving than cakes. Baking a homemade batch of cookies is an easy way to hustle up a retro taste of the South.

We can thank the English Scotch and Dutch immigrants for bringing their cookie recipes to North Carolina’s shores. In early cookbooks cookies were usually listed at the end of the cake chapters as an afterthought. They were called whimsical names like jumbles plunkets and cry babies. Southern housewives have always taken great pride in their cookies calling them tea cakes. After the Civil War many freed slaves took their beloved tea cake recipes with them across the United States firmly entrenching and evolving them into the fabric of American culture.

Pecan pie is thought to have originated with French settlers around the early 1700s in New Orleans but the exact origin of the tart-like tassies is unclear. It is thought that the word came from the French word tasse meaning small cup. These bite-sized pecan pies were first mentioned in newspapers in the ’50s and tended to make appearances at weddings and around Thanksgiving when pecans are still fresh. Pecan growers in Texas have been sharing a tassie recipe since the ’70s says Anne Byrn author of “American Cookie.” They also found their way into the screenplay for “Steel Magnolias” when Clairee served them to the ladies at the beauty parlor. It was however cookbook author and Southern fare chef Nathalie Dupree who made the tassie quite famous. The recipe below has been adapted from Dupree’s original recipe.

Crust: Place the flour into an electric mixer and add the butter. Mix until mixture resembles bread crumbs. Add the cream cheese and mix until well blended. Mix until dough comes together. Press to form a dough ball with your hands. Wrap the dough in plastic wrap and place in fridge while you make the filling.

Filling: Whisk together the egg brown sugar vanilla salt and melted butter in a small bowl. Stir in half the pecans.

Pinch off pieces of the dough and roll them into 1-inch balls. Press them into the bottom and up the sides of an of an ungreased mini-muffin tin.

Spoon about 1 1/2 teaspoons of filling into each muffin cup and sprinkle remaining pecans on top.

Bake until crust is golden about 20 minutes. Let the tassies cool in the tin on wire rack. Pecan tassies can be stored in single layers in airtight containers for up to five days.

George Washington Carver (1864-1943) an African-American educator botanist and scientist from Alabama’s Tuskegee Institute started promoting the peanut as a replacement for the South’s cotton crop which had been destroyed by boll weevils. He went on to develop hundreds of uses for peanuts and published three recipes for peanut cookies using crushed peanuts in his 1916 Research Bulletin called “How to Grow the Peanut and 105 Ways of Preparing it for Human Consumption.”

Preheat the oven to 375 degrees. Line a baking sheet with parchment paper.

Using your hands roll the dough by the teaspoonful into 1-inch balls; place the balls onto the prepared baking sheets spaced about 2 inches apart. Flatten each ball into a crisscross pattern with a fork that has been dipped in water.

Bake for 10 to 12 minutes or until the cookies are golden. Remove from oven and cool on wire cooling racks.

Ask folks from the South what they call a marshmallow sandwiched between two cookies and the answer will unlikely be a s’more but rather a MoonPie. The original version of this cookie originated in 1917 in Chattanooga Tennessee. The cookie’s only published history appears in “The Great MoonPie Handbook ” written by Ron Dickson. It tells the tale of a travelling salesman who sold the original cookie to Appalachian miners that needed a quick energy booster and snack during their short break. One of the miners had asked him to make a snack as “big as the moon ” which is what inspired the name MoonPie.

By the 1920s and ’30s the cookie had become a staple of American culture that was shipped off to troops during World War II as a small taste of home. The cookies are still produced by the Chattanooga Bakery and come in a variety of flavors including salted caramel strawberry and lemon and orange for Mardi Gras which are typically thrown from the parade floats. Tradition dictates that you eat a MoonPie washed down with an RC Cola. For a twist on the classic make a homemade version of this rich decadent combination of marshmallows nestled between soft graham crackers dipped in chocolate.

In a medium mixing bowl cream butter brown sugar and vanilla until mixture is light and creamy about 1 minute. Reduce mixer speed and add egg and milk.

Keeping mixer on a low speed gradually add dry ingredients to wet ingredients until combined to form a soft dough. Divide the dough into two balls wrap in plastic wrap and refrigerate for 1 hour.

Roll the dough to 1/4 inch thick. Cut out cookies using a 3-inch round cookie cutter and place on a baking sheet. Refrigerate for 10 minutes. Bake cookies 10-12 minutes or until golden. Allow cookies to cool and transfer them to a cooling rack to cool completely before the next step.

Spoon a teaspoon of marshmallow creme into the center of each cookie. Top with a second cookie and press together until the marshmallow squeezes out to the edge.

Melt the chocolate in a heatproof bowl over a pot of boiling water. Remove from the heat and allow the chocolate to cool slightly before whisking in the oil.

Dip the cookies into the warm chocolate. Turn with a fork until thoroughly coated. Then remove and place cookies on a baking sheet lined with parchment paper. Allow the cookies to stand until the chocolate has completely hardened.

Cloyingly sweet this decadent cookie became particularly popular down South. Some say the recipe originated on the back of a condensed milk can; others believe it was sent into a magazine in the ’60s called “The Week” that featured a recipe submitted by an 11-year-old from Dallas Texas. Either way it’s a retro recipe and has many variations but five ingredients always form the base: graham crackers condensed milk chocolate chips coconut and pecans. The cookies are also known as 7-layer cakes and magic bars.

Preheat the oven to 350 degrees.

In a medium bowl mix the graham crackers with the melted butter. Press the mixture onto the bottom of a 13- by 18-inch baking sheet and bake until golden about 10 minutes. Let cool.

Once the crust is cool pour condensed milk evenly over the crumb mixture. In a large bowl mix the pecans chocolate and coconut. Spread evenly on top of the crust. Let it sit for a few minutes to allow the condensed milk to saturate the crust and then bake until the top is lightly browned and caramelized 20 to 25 minutes.

Let cool completely before cutting into bars into 2-inch squares.