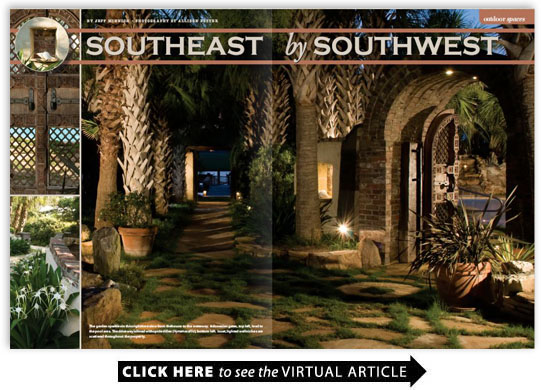 The senses are flooded from a central vantage point with vistas and more stone pathways opening in all directions. Veined in rich mossy green one path offers a glimpse of the water; another previews the pool. Even so all is not yet revealed.

From the house the full experience of the peaceful scene water dock and hammock awaits. Turn around and the treatment is a textbook study in asymmetrical balance. Walk through another gate and be transported to or the West Indies; the ceiling fans in the loggia only add to the lazy ambience surrounded by palms pindo palms palmettos sago and palms. The number is staggering.

The only reason we stopped planting palms is because ran out of them jokes landscape designer Tony Parker of Classic Landscapes. He designed installed and maintains the plantings for homeowners Jeffrey and Sheri Matthews. The Matthews reside in for most of the year where they raise cutting horses; they have another ranch in . Sheri Matthews is a writer and raises border collies. Shes originally from . Jeffrey Matthews roots are in . In addition the Matthews grow woody ornamentals at their Old Courthouse Nursery in . Their home on Figure Eight Island reflects a combination of the southwestern landscape of and the subtropical landscape of southeastern coastal . They designed the garden for seamless indoor-outdoor living.

The lot was a blank slate when Jeffrey Matthews purchased it.

He set his claim with an American flag and went to it Parker says.

Matthews says I wanted a private shaded little oasis. The old beach houses were small thats what I wanted too.We hauled the topsoil up from maybe three or four hundred yards of it he adds. We hauled so many truckloads of soil in here; I think Figure Eight Island changed the hauling rules after we finished our project he says with a laugh.

The neighbor to the south let them use a vacant lot as a staging ground for all of the materials.

We could never have done the project without the use of that property Matthews says.

Once the initial sensual shock of the garden eases the details begin to emerge. Take the wood for instance. Matthews purchased the pool areas Indonesian gates in .

Elsewhere on the property more wooden gates and wood supports were fashioned from walnut trees from the Matthews ranch that fell during Hurricane Floyd.

These things were hand-hewn the old way by Stanley Cavanaugh from up in Matthews says. He used the old tools hand-sharpened his hewing axe.

The wooden support on the outdoor showerhead is made from heartwood pine. Its as if the entire outdoor shower area grew right out of the ground. Even the towel rack by the hot tub is driftwood. The aged teak furniture cushions and umbrellas blend beautifully.

Surrounding the property line and the pool coyote fencing provides a measure of safety as well as desired privacy. It unifies the different spaces as do the stone and palms. The thick-layered plantings block curious eyes as well as muffle outside noise.

In the coyote fences are built with cedar. I used copper wire. Regular wire would have rusted in the Figure Eight climate Matthews says. Copper was used extensively throughout the site for lighting and shower fixtures too.

The handmade bricks used for the archway into the pool area and along the tops of the walls came from an old general store on Highway 24 in . When the store burned the bricks were saved.

I knew Id use them sometime Matthews says. We used every one. It was just the right amount.

The archway and the Indonesian gates are clearly the pivotal point of the garden.

Stacked stone benches and boulder retaining walls are scattered throughout the garden. Hes got a place to sit everywhere you look Parker says.

A small raised deck is located at the end of the pool area just above the hot tub. Even though its on the water its very private with just a few breaks in the greenery. The pool coping mimics the patio and walkways. The same irregular stone is used throughout. In a completely unique treatment the mortared coping joints merge seamlessly with the grass joints elsewhere in the pool deck for stunning results.

The property is one of the few on the lee side of Figure Eight with a sandy beach. But you wouldnt know it from the garden where the passage of an occasional boat is screened by the lush plantings and its noise is muffled by falling water.

Three millstones from Jeffrey Matthews grandfathers gristmill are used in the garden around the gates and on the floor of the outdoor shower. Water drains through the millstones central hole.

There were eight original stones. My grandfather started his mill in the 1930s Matthews says. The gristmill was the foundation for the familys food-based empire.

My wife and I travel all the time with our work and weve been to some beautiful places. But we cant imagine a more beautiful place to us than Figure Eight Matthews says.

Tony was instrumental to this project. I cannot praise him enough he adds. Not many designers would have worked without a detailed formal landscape plan we did it as we went along.

The design began with the koi pond and waterfall just off the rear loggia.

I told Tony what I wanted and he just went to it Matthews says.

Parker adds that it was the most collaborative job hes ever completed with a client. He likes to listen to what a client wants and what the site tells him to do. His degree in philosophy helps and early on in his career he was fortunate to work with an architect who taught him about spatial relationships.

For this garden we threw everything in a shaker and this is what came out of it Parker laughs.

I think theres a strong sense of unity between the inside decoration and the outside landscape design Parker says.

The homeowners love of natural materials ties together the house and garden. So densely entwined its hard to believe the landscape is only about six years old harder still to discern what is due South from what is truly Southwest in this sublime elegant place.