From mild to spicy, North Carolina has plenty of peppers 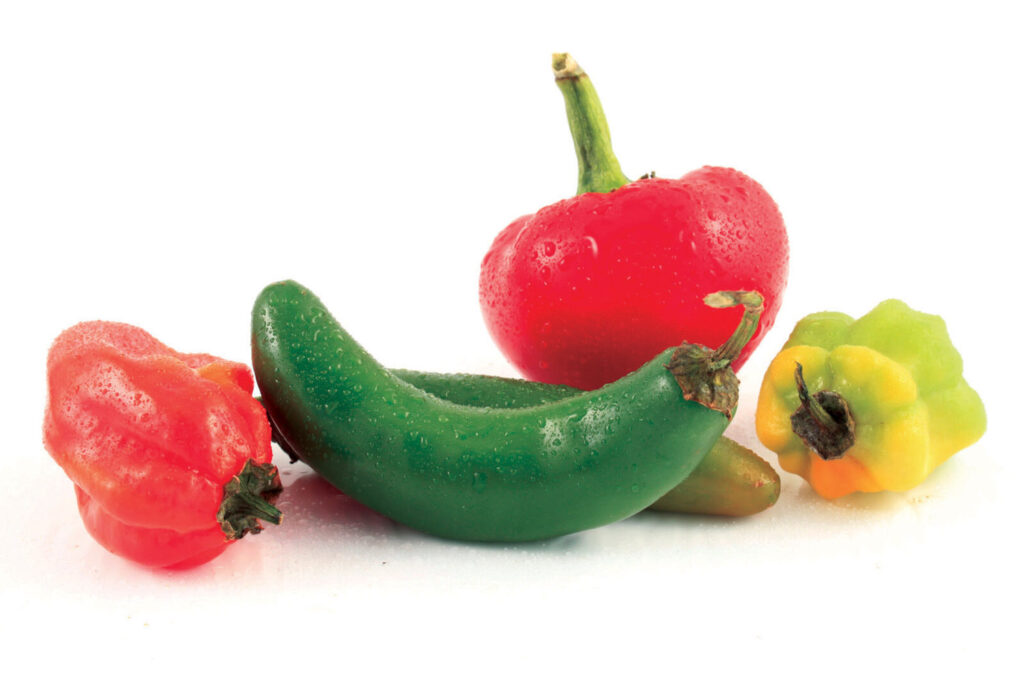 Every year between July and November, farmers and home gardeners in North Carolina harvest a wide variety of peppers. From sweet bell peppers to the famed Carolina Reaper (the hottest commercially available chili pepper in the world), these flavorful local beauties add extra spice to any dish.

The spiciness of a pepper depends on the amount of a chemical compound called capsaicin. The Scoville scale measures the amount of capsaicin in Scoville Heat Units (SHU).

Can’t take the heat? No need to get out of the kitchen! Dairy contains a protein called casein that deters the effects of capsaicin. Try a cold glass of milk or a dollop of sour cream to cut the spice when you’ve had a little too much.

Here Are Some Of The Most Common Peppers Grown In North Carolina.

(0 SHU) are sweet, colorful peppers used in everything from Asian to Mexican cuisine. Add to a stir fry with some onions or serve raw in a salad for some extra crunch.

(0-15,000 SHU) come in two varieties. The sweet peppers are known as wax peppers, and the hotter chilis are called Hungarian hot wax, with spiciness up to 15,000 SHU. If you’re asking for banana peppers on pizza or a sandwich, they’re probably wax peppers.

(100-500 SHU) look like banana peppers but have slightly thicker skin and are usually pickled. Their skin is typically a bit more yellow, and they will always have some spice, while the mildest banana peppers will have none.

This sweet red Italian pepper was brought to America from Ruoti, Italy by the Nardello family in 1887. They are long, thin skin frying peppers. They were named for Giuseppe and Angella Nardello’s fourth son, Jimmy. They dry easily, and have rich flavor.

(2,500-5,000 SHU) are the perfect everyday pepper for adding a little kick to the kitchen. To quickly spice up a recipe, replace a bell pepper with jalapeno. As a true workhorse of the kitchen, jalapenos are delicious fried, pickled, roasted, and even blended into fresh sauces. To bring those SHUs down, remove the seeds and white parts. Fun fact: chipotle peppers are just smoked, dried jalapeños.

(30,000-50,000 SHU) are most commonly found in a ground powder, also known as cayenne pepper. Cayenne pepper flakes are also on the table of your local pizza place, and called red pepper flakes in stores. Cayenne pairs particularly well in hot sauces with vinegar.

This world-famous pepper tips the scales at 2 million SHU. These peppers are primarily used in hot sauces, as eating even a tiny sliver can have uncomfortable effects. Handle with care: if you’re brave enough to use these in a dish, wear gloves and eyewear to prevent some painful moments.

(1,000,000 SHU) are the spiciest chilis grown in North Carolina other than the Carolina Reaper.

(500-1000 SHU) are also known as cherry peppers. While slightly spicy, these peppers are mostly known for their sweet and mild flavor. Pimientos are usually pickled but can be eaten raw. Most North Carolinians are familiar with pimiento cheese, a delicacy made with pimientos, paprika, cayenne and grated cheese. What you probably didn’t know is that the red stuffing inside green olives is made with sweet pimientos.

(1,000-2,000 SHU) are a wildly popular Mexican chili pepper with a distinct flavor. A milder green variety is usually found in grocery stores, while red poblanos might have a little more spice than expected and are found in stores for only a brief window at the end of summer. Poblanos are commonly stuffed, roasted and peeled, or dried. Dried poblano peppers are called ancho chilis – look for them in the spice aisle — and are perfect for adding a smoky flavor to homemade chili.

(100,000 SHU) are known for their fruity, citrusy flavor, slightly floral aroma and, of course, their heat. For these reasons, habaneros are particularly popular for salsas and hot sauces, as well as a spicy mango lemonade.

(10,000-23,000 SHU) look like a skinnier jalapeno but are much spicier. These peppers are best in salsas, sauces, relishes and garnishes. Try roasting a serrano using a grill or gas burner, removing the skin, and blending it into a homemade hot sauce. Serrano hot sauces are often made with mangos, pineapples or peaches to balance the heat.

(50-1000 SHU) are East Asia chili peppers are mostly very mild but some can be hotter. They are sweet, grassy, citrusy and smoky. Roast them, flash fry or blister them. They can be served fresh, as a side dish, or in salads.

Mix all ingredients. Start with three big spoonfuls of mayonnaise, adding small spoonfuls until the spread is not too stiff and wet as you mix the other ingredients. Refrigerate for 12-24 hours so flavors marinate and enjoy!

Remove fresh corn from the cob, drain and rinse canned corn, or defrost frozen corn. Add a splash of grapeseed oil to a nonstick skillet on medium heat. Add the corn with a pinch of salt and pepper and stir every couple of minutes until it starts to stick and brown. Add diced jalapeno and cook for one more minute. Remove from heat and add agave if desired. Place into a medium mixing bowl.

Place beans into a strainer and rinse until the water is clear. Add beans to a mixing bowl with the corn. Add the remaining ingredients to the mixing bowl and gently stir to combine.

Serve with tortilla chips, on top of a salad or as an enchilada filling. To store, cover and refrigerate for up to five days.

*Jalapeno, pepperoncini, banana and serrano are the most popular, though any pepper will work. Keep in mind the spiciness of each pepper when slicing. Slice spicier peppers more thinly to keep from overpowering the dish. It is OK (and encouraged) to mix peppers.

Bring water, vinegar, sugar and salt to a boil, then remove from heat. Slice peppers and place them into a jar with other ingredients. Pour hot brine into the jar and seal with a well-fitting lid. Leave on the counter for an hour to cool, then refrigerate for at least 24 hours.