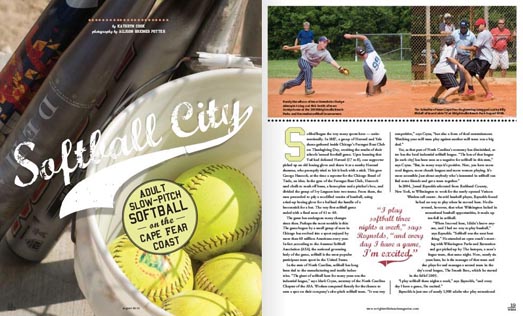 Softball began the way many sports have unintentionally. In 1887 a group of Harvard and Yale alums gathered inside Chicagos Farragut Boat Club on Thanksgiving Day awaiting the results of their schools annual football game. Upon learning that Yale had defeated Harvard (17 to 8) one supporter picked up an old boxing glove and threw it at a nearby Harvard alumnus who promptly tried to hit it back with a stick. This gave George Hancock at the time a reporter for the Chicago Board of Trade an idea. In the gym of the Farragut Boat Club Hancock used chalk to mark off bases a home plate and a pitchers box and divided the group of Ivy Leaguers into two teams. From there the men proceeded to play a modified version of baseball using a tied-up boxing glove for a ball and the handle of a broomstick for a bat. The very first softball game ended with a final score of 41 to 40.

The game has undergone many changes since then. Perhaps the most notable is this: The game begun by a small group of men in Chicago has evolved into a sport enjoyed by more than 40 million Americans every year. In fact according to the Amateur Softball Association (ASA) the national governing body of the game softball is the most popular participant team sport in the United States.

In the state of North Carolina softball has long been tied to the manufacturing and textile industries. “The giant of softball here for many years was the industrial league ” says Mark Cryan secretary of the North Carolina Chapter of the ASA. Workers competed fiercely for the chance to earn a spot on their companys slow-pitch softball team. “It was very competitive ” says Cryan “but also a form of local entertainment. Watching your mill team play against another mill team was a big deal.”

Yet as that part of North Carolinas economy has diminished so too has the local industrial softball league. “The loss of that league [in each city] has been seen as a negative for softball in this state ” says Cryan. “But in many ways its positive. Now you have more coed leagues more church leagues and more women playing. Its more accessible. Just about anybody whos interested in softball can find some friends and get a team together.”

In 2004 Jarrad Reynolds relocated from Rockland County New York to Wilmington to work for the newly opened Verizon Wireless call center. An avid baseball player Reynolds found he had no way to play when he moved here. He discovered however that what Wilmington lacked in recreational baseball opportunities it made up ten-fold in softball.

“When I moved here I didnt know anyone and I had no way to play baseball ” says Reynolds. “Softball was the next best thing.” He attended an open coachs meeting with Wilmington Parks and Recreation and got picked up by The Isotopes a mens league team that same night. Now nearly six years later he is the manager of that team and also plays for and manages a second team in the citys coed league The Smash Bros. which he started in the fall of 2005.

“I play softball three nights a week ” says Reynolds “and every day I have a game Im excited.”

Reynolds is just one of nearly 1 900 adults who play recreational softball in Wilmington each year.

“Historically softball numbers have gone down other places but not here ” says Wilmington Parks and Recreation athletic supervisor John Rancke who oversees the citys softball program. In the spring 2010 season the city had 91 registered softball teams averaging 20 players each in 13 leagues one church one womens six coed and five open (all men).

Rancke says even more people would like to play but lack of space forces him to turn teams away each season. “Right now there just arent enough fields to play everybody ” he says. “Weve had to limit it.”

Wrightsville Beach has also had to put limitations on the sport. “Weve had softball for 30 years up until last year ” says Katie Ryan recreation program supervisor for Wrightsville Beach Parks & Recreation. Their adult coed softball league which distinguishes itself from the city leagues by playing all its games on weekends suffered recent budget shortfalls. “Last year we were preparing the new budget cycle and we had to make cuts ” says Ryan. Though Parks & Recreation didnt eliminate the league outright they increased the registration fee from $495 to $600 per team with a minimum of 22 teams almost twice the normal league size. “Unfortunately ” said Ryan “most people just dont want to pay that much.”

She hopes to resume play at Wrightsville Beach Park this fall at the previous team rate but adds “Well just have to see what happens.”

In Wilmington softball games have been scattered among fields throughout the city including at Myrtle Grove Middle School Empie Park and Roland-Grise Middle School. “This makes it much harder to coordinate ” says Rancke “especially when weather is involved because youve got to ride all over the county to check each field.”

This fall however that will all change when the Port City welcomes Olsen Park a new five-field softball complex located behind E.A. Laney High School. Made possible by a $35 million Parks Bond which voters approved in May 2006 Olsen Park will host adult softball games five nights a week. On weekends Rancke hopes to rent out the fields to other teams and leagues from across the state.

The opening of Olsen Park signifies a possible return to softballs glory days in Wilmington a period highlighted by the Bobby Benson Softball Complex which hosted some of the countrys biggest tournaments during the mid and late 1980s.

Opened in April 1983 the state-of-the-art facility built and owned by Benson was widely considered to be one of the best in the state. Located on Carolina Beach Road just north of Monkey Junction it boasted seven lighted softball fields electronic scoreboards and an underground watering system. The complex attracted teams from across the nation frequently hosting ASA tournaments qualifying tournaments for the United States Slow-pitch Softball Association and drawing more than 200 teams for tournaments during the annual Azalea Festival weekend. In fact the only problem with the complex was that it was too popular. Benson soon became overwhelmed with the job of running it and sold the complex in 1990. Several years later the new owners shut the doors for good.

Though softball fever lost momentum after the close of the Bobby Benson Complex Olsen Park may help to restore it. “Softballs a big social activity ” says Rancke. “It will get even bigger when we move to Olsen.”

Players seem equally excited about the new facility. Henry Olds has played in the citys church league for 12 seasons. “The opportunity to finally have all the fields in one location is great ” he says. “It will be good for us and for the community.”

Olds plays for and manages a team for Scotts Hill Baptist Church. He says that in addition to the “fun and fellowship” softball offers the best thing about the game is its accessibility. “Its a sport you can play at many different skill levels and many different ages.”

Just ask Phil Rose. Hes been playing softball for nearly 20 years (baseball before that) and at age 81 has no plans to stop. Rose is the founder and commissioner of the Wilmington Senior Softball Association (WSSA) a league of what he calls “a bunch of guys old enough to be grandfathers.” Rose started the league in 1995 after he and his wife moved from Long Island New York to Wilmington to retire. Rose had been playing in the Long Island Senior Softball Association for four years and assumed there would also be a league in Wilmington. Not the case. “I was shocked to learn there was no league here ” says Rose. “So I thought I better start one myself.”

Rose made a flyer printed off 30 copies and posted them around town. Soon he was receiving phone calls. “There were 12 of us to start ” he says “not enough to make teams so we would just hit the ball around.” But before long they found a senior team in Brunswick County to play alternate home games against. By the next year they had enough players to form three teams. “It mushroomed ” says Rose.

Today the WSSA is 167 players strong with 10 teams and two divisions Atlantic (ages 53-64) and Coastal (ages 65 and up). Eventually Rose hopes to add a third league for just the 70 year olds.

Clad in their team uniforms the men of the WSSA get together every Tuesday and Thursday morning to do what they love best.

“In our league we have former police detectives and NYPD officers retired doctors and dentists engineers and accountants. Its really all walks of life ” says Rose. “But the thing we all have in common is we love to play ball.”