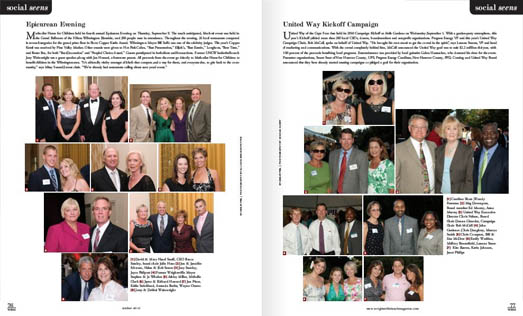 Epicurean Evening
Methodist Home for Children held its fourth annual Epicurean Evening on Thursday September 9. The much anticipated black-tie event was held in the Grand Ballroom of the Hilton Wilmington Riverside and 300 people were in attendance. Throughout the evening 26 local restaurants competed in several categories for the grand prize: Best in Show Copper Kettle Award. Wilmington Mayor Bill Saffo was one of the celebrity judges. This years Copper Kettle was received by Pine Valley Market. Other awards were given to Hot Pink Cakes Best Presentation Elijahs Best Entre Longhorn Best Taste and Bento Box for both Best Decoration and Peoples Choice Award. Guests participated in both silent and live auctions. Former UNCW basketball coach Jerry Wainwright was a guest speaker along with Jan Howard a fostercare parent. All proceeds from the event go directly to Methodist Home for Children to benefit children in the Wilmington area. Its a friendly rivalry amongst all chefs that compete and a way for them and everyone else to give back to the community says Missy Sumrell event chair. Weve already had restaurants calling about next years event.

United Way Kickoff Campaign
United Way of the Cape Fear Area held its 2010 Campaign Kickoff at Airlie Gardens on Wednesday September 1. With a garden-party atmosphere this years Kickoff yielded more than 200 local CEOs donors boardmembers and nonprofit organizations. Progress Energy VP and this years United Way Campaign Chair Bob McCall spoke on behalf of United Way. He brought his own music to get the crowd in the spirit says Leanna Strawn VP and head of marketing and communications. With the crowd completely behind him McCall announced the United Way goal was to raise $2.2 million this year with 100 percent of the proceeds benefiting local programs. Entertainment was provided by local guitarist Galen Hunsucker who donated his time for the event. Pacesetter organizations Smart Start of New Hanover County UPS Progress Energy Carolinas New Hanover County PPD Corning and United Way Board announced that they have already started running campaigns or pledged a goal for their organization.