So Much to Say

BY Charles Walker as told to Marimar McNaughton 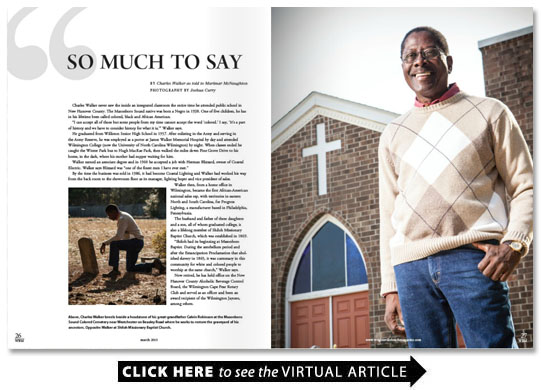 Charles Walker never saw the inside an integrated classroom the entire time he attended public school in New Hanover County. The Masonboro Sound native was born a Negro in 1938. One of five children he has in his lifetime been called colored black and African American.

“I can accept all of those but some people from my time cannot accept the word ‘colored.’ I say ‘It’s a part of history and we have to consider history for what it is ‘” Walker says.

He graduated from Williston Senior High School in 1957. After enlisting in the Army and serving in the Army Reserve he was employed as a porter at James Walker Memorial Hospital by day and attended Wilmington College (now the University of North Carolina Wilmington) by night. When classes ended he caught the Winter Park bus to Hugh MacRae Park then walked the miles down Pine Grove Drive to his home in the dark where his mother had supper waiting for him.

Walker earned an associate degree and in 1960 he accepted a job with Herman Blizzard owner of Coastal Electric. Walker says Blizzard was “one of the finest men I have ever met.”

By the time the business was sold in 1986 it had become Coastal Lighting and Walker had worked his way from the back room to the showroom floor as its manager lighting buyer and vice president of sales.

Walker then from a home office in Wilmington became the first African-American national sales rep with territories in eastern North and South Carolina for Progress Lighting a manufacturer based in Philadelphia Pennsylvania.

The husband and father of three daughters and a son all of whom graduated college is also a lifelong member of Shiloh Missionary Baptist Church which was established in 1869.

“Shiloh had its beginning at Masonboro Baptist. During the antebellum period and after the Emancipation Proclamation that abolished slavery in 1865 it was customary in this community for white and colored people to worship at the same church ” Walker says.

Now retired he has held office on the New Hanover County Alcoholic Beverage Control Board the Wilmington Cape Fear Rotary Club and served as an officer and been an award recipient of the Wilmington Jaycees among others.

You say your ancestors moved to Hewlett’s Creek from Fayetteville

“My great-grandfather on my mother’s side maternal great-grandfather Calvin Robinson was born in 1861. The story was told that they came down from Fayetteville during the Civil War and ended up in Wilmington in Masonboro. I guess they were bothered or intimidated by the Confederate soldiers. They asked the Union soldiers if they would keep them from doing that. They settled on Masonboro to my knowledge on the sound. I often heard my mother and my aunts her sisters talk about Grandpa Cal Calvin Robinson.”

“As a matter of fact I heard Addison Hewlett (a Wilmington attorney and former Speaker of the House) who knew the family very well because my mother and they raised him in terms of caring for him when he was young — his wife wrote ‘Between the Creeks.’ Ed Robinson ? and Altimore Walker my father’s brother my uncle was mentioned in that book he owned Walker’s Grocery which was on Masonboro. I was a salesman all my life and Mr. Hewlett told me I should be a salesman because my great Grandpa Cal was a salesman in terms of his food preparations. He would make a stew and cook it down to a low maw and Hewlett would say ‘I don’t know what a low maw is but it smells good.'”

“My mother’s father was Ed Robinson. Ed Robinson was a fisherman and most fishermen black and white used Hewlett’s Creek and the waterways to fish. The landing was opposite Cove Point. All of this used to be a flower field until Fred Graham and others bought it and turned it into Cove Point. Ed Robinson had his boats down to Hewlett’s Creek. It was a spot most black people used called the landing and it was right on the creek. We could see Greenville Sound across the creek. Ed Robinson my grandfather always had five or six boats down there and he had his fishing nets and his seines and all down there. Nobody would bother with them. These were huge nets. He would get the colored men — as it was called back then seems a bit archaic now — he would get them to go with him fishing whatever the season was whether it was fishing shrimping clamming oysters what have you. I never knew him to do anything else.”

Did you ever fish with the men?

“We were kids. He would take us down to the landing sometimes on Saturday. At those times he would mend his nets. We had access as kids to his boats. In the summertime in particular we would go out there and pretty much stay all day and swim getting clams and sometimes eating them right out in the water. We would spend a lot of time in the water the boys of the community in the summertime learning to swim and all of that.”

“Sometimes we carried a small shucking knife. Other times we knocked the shells together to open them. We had little instruments down there we would use. We didn’t have proper things because nothing back then was proper. We had to make do with what we had. When I was a kid at that time in the summer they would come back with just huge amounts of shrimp. They would cook them outside in this huge black kettle. They would build a fire under that and cook the shrimp. They had these long tables and they would put the shrimp out on the tables and prepare to go to market. And I being a little kid around six years old had a little bike with a basket on it. And I would pack up shrimps in these little bags and would put them in my little basket and take them down to what we called ‘the front of the sound’ where these very wealthy people lived E.P. Crow and the Parsleys. I had my little shrimp route and I would sell my shrimp. And E.P. Crow was the last house I would go to. It was one of the big houses. I would always go to the side door. The maid that worked there was Miss Hazel. She’s in the black community there. She would always come to the door and she would say Mr. Crow — she would call me by my nickname which was Winkie — and she would come to the door and say ‘Mr. Crow Winkie’s out there with his shrimp.’ He would always come to the door and ask me every time how many do I have left? If I had three bags left or four he’d take all of them. And he did that every time I went there.”

“Walker’s Grocery was on the Masonboro Sound Road. It was a little wooden store that served the community black and white. He served meat vegetables beverages. Little store occupied by many. He was there for quite a time. There was another store there as well. She was Daisy Melton. She was on the Masonboro Loop Road.”

Was that unusual for the time?

What were your favorite foods?

“If my grandfather didn’t catch enough fish to go to market that was dinner. My mother cooked seafood stewed clams with peppers and onions and gravy over rice. She did the same thing with shrimp she called it ?touff?e. We had a garden. She stewed fish — mullet flounder. Back a long time ago coming up things were pretty rough.”