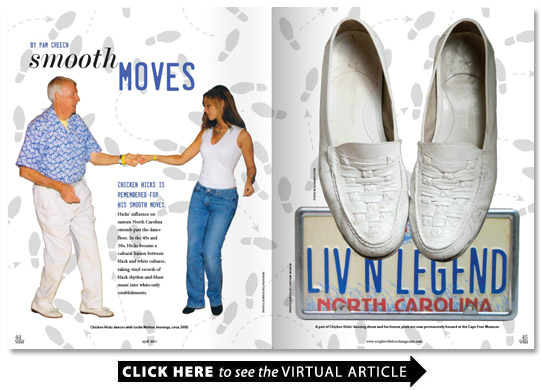 Chicken Hicks is remembered for his smooth moves.Hicks’ influence on eastern North Carolina extends past the dance floor. In the 40s and 50s Hicks became a cultural liaison between black and white cultures taking vinyl records of black rhythm-and-blues music into white-only establishments.

Born in Durham North Carolina in 1925 Hicks had two older sisters who taught him to jitterbug says Bo Bryan author of Shag: The Legendary Dance of the South. When Hicks was in his early teens he danced at nightclubs in Durham’s Hayti an African-American neighborhood and developed a passion for rhythm and blues.

In 1943 after serving in the U.S. Coast Guard Hicks moved to Carolina Beach. He danced at Sea Breeze also known as Freeman’s Beach a vacation destination for African Americans during racial segregation. He took the bop and jitterbug moves he perfected at Sea Breeze and brought them to white-only dance halls.

“The jukebox operators noticed that wherever he went people followed ” Bryan says.

Lynda Hicks Chicken’s wife of 30 years says the jukebox operators were the ones who decided which records went inside jukeboxes. Hicks brought them black R&B records.

“They asked him what kind of records he liked and they played them ” Bryan says. “The white kids who came to town that summer heard music they’d never heard before — Big Joe Turner Lula Reed The Ink Spots.”

White remembers Hicks for his energy.

“He danced until the end of his life — he was in top physical shape ” White says. “He worked until the day he died building fences.”

Lynda Hicks says he earned the nickname Chicken because of his physique.

He had long thin legs. They would do anything he wanted them to do. They were like rubber ” she says.

Lynda met Chicken in 1974 at Mondays a dance club near the Ocean Plaza Ballroom in Carolina Beach. “He asked me to dance and we hit it off from there ” she says. “He liked the Ocean Plaza” — had even danced Lumina Pavilion — “because they [both] had name bands. People like Count Basie had been there.”

Lynda Hicks says her late husband would dance with anyone from novice dancers to seasoned shaggers.

“He loved to dance ” she says. “He picked up a lot of his steps from the blacks in Durham.”

One of these steps was the camel walk. To do the camel walk a dancer starts with one leg straight and one knee bent. The dancer’s weight is supported by the straight leg. Then the dancer shifts his or her weight to the opposite leg while swinging the hips.

“That move was integrated into the shag ” Lynda Hicks says.

Hicks is also remembered for his unique attire.

“He was known for wearing a suit. He would wear a jacket slacks and a tie but no shirt or socks ” says Leslie Melton Jennings a Wilmington native who grew up shag dancing with Hicks in the 90s. “He made me a better dancer.”

Melton says Hicks was a mentor to younger dancers.

“He was a grandfather figure to me. He was easy to talk to; he was ageless. One time on the way to an event in Greensboro we stopped in Durham and he showed me the house where he grew up ” she says. “He loved all the junior dancers. He loved seeing all the kids dancing. He wanted to keep the dance alive through the younger generation.”

More than ten years have passed since Hicks’ death in 2004 and Melton clings to her fond memories of dancing with him.

“He was a lot of fun to dance with — sort of a showboat. He had three or four signature steps he would repeat every song ” Melton says.

With hip swivels and foot pivots Hicks was one of the most famous dancers in North Carolina but he never competed.

“He loved attending competitions but competition dancing was never his thing. He was a free spirit ” Melton says.

“When I was a teenager I would watch Chicken and mimic his moves ” Stokes says. “My style is an older style and I try to keep it that way.”

Stokes also credits Hicks for his taste in dance music.

“The music he loved is really important to me. Everything I listen to is from the 50s ” Stokes says.

Like Melton Stokes feels a twinge of nostalgia while sharing memories of Hicks.

“I wish the kids who are growing up in the shag the way I did could have Chicken in their lives to show them the tradition in the dance ” he says.