Sketches of the Artisans 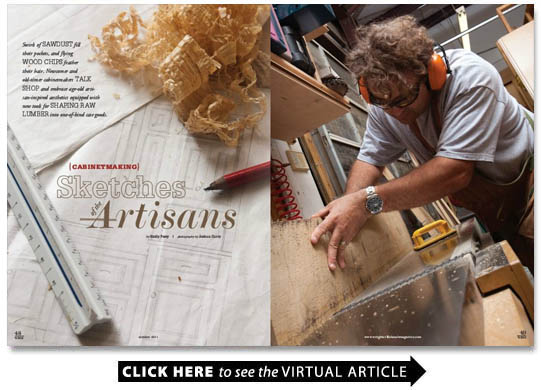 Culinary artist Brandon Parrow never intended to become a woodcrafter. The 1994 graduate of Johnson and Wales University in Charleston had already begun his career as a chef when one of lifes paths led him toward an unexpected destination. A house renovation project inspired him to put down the knives and pick up a hammer and saw. He enrolled in cabinetry classes at Cape Fear Community College.

For a while he straddled both worlds working four days a week in the food business and three days a week building cabinets until the cabinet making eclipsed the culinary career.

Seven years later Parrows mid-town cabinetry shop is a one-man operation. He is the sole businessman designer and cabinetmaker.

“I like working alone ” Parrow says adding that he occasionally hires carpenters to help with cabinet installation.

With the single-minded focus of a one-man operation he builds one project at a time. For Parrow the cabinetmaking process begins when he meets with clients. Then he draws initial plans. Once the sketches are approved he gets to work. He begins by milling the lumber that is delivered to him rough. Once the cabinets are sent to the finisher for staining painting or glazing he begins a new project.

His signature style is the beaded face-frame cabinet. Although the process is more time consuming because beaded face cabinets sit within the frame rather than on top of it the result creates more dimension and contrast he says.

“Its all about the details ” Parrow adds.

One of his favorite projects was a mahogany-paneled room he completed last year.

“We made all of the moldings here and some built-ins and a bar there was really a lot of detail.”

With a preference for creating custom built-ins and freestanding furniture Parrow says he enjoys working with his clients.

“Ninety percent of the time I work directly with homeowners and most have an idea in their head of what they want ” he says. For those who are unsure of what direction to take Parrow works within the parameters of the space and the clients dcor and lifestyle to create unique custom pieces.

While many area cabinetmakers have felt the pressure from the sluggish economy Parrow is optimistic.

“Referrals have kept me in business ” he says. “I just try to work hard and make customers happy.”

And with Parrows focus on his customers satisfaction his love for his work continues to grow.

“I really enjoy what I do ” he says. “I used to have this same passion for food and when you find something youre passionate about it makes it easier to go to work in the morning. Its not always about making money. Its all about quality work. And if you can make people happy on top of it thats what I like.”

The Balding Brothers (Next generation carpenters)

The Balding Brothers a trio of siblings Tim Ian and Nick grounded their historic renovation business in their downtown Wilmington cabinet shop.

Instigator Tim Balding now attends Savannah College of Art and Design where he pursues a degree in architecture. Ian Balding oversees the firms historic renovation projects. Although it was his older brothers who started the company its Nick Balding who holds the enterprise together.

“Theyre the craftsmen and Im basically the business guy ” laughs Nick who focuses on sales and marketing.

“Wood is really an awesome medium because you can do almost anything with it; you just have to be creative ” Nick says.

Tim cut his teeth in the cabinetmaking trade about 10 years ago.

“I was really lucky in the early part of my career to work under some fantastic craftsmen and cabinetmakers in the New York area ” Tim says adding that he also worked in California as an apprentice. “Through all of that Ive really learned the craft of cabinetmaking and really learned to enjoy the hands-on working in the shop.”

Tim taught his two brothers all he knows. Originally starting their business as a real estate investment company they completed several showcase projects. Soon after the Balding brothers were recognized for the quality of their cabinetry.

“For the most part our main focus has always been renovations and remodeling historic houses downtown ” Nick says. He emphasizes the importance of blending the new cabinets with the historic fabric of the homes. Tim calls it their shared aesthetic.

The Balding brothers cater to high-end clients seeking custom cabinets designed and fabricated for period homes. They have also developed a line of semi-custom cabinets for the budget conscious client with a thirst for quality craftsmanship. With as many as five other members on their staff they can juggle three projects simultaneously with one in design one in production and one in finishing.

The Baldings were among the first to embrace green technologies while holding onto their hands-on approach to building choosing non-toxic materials and supplies to eliminate off gassing.

Tim notes one of the major industry changes is the mass production of cabinets that bear the stamp of the handmade.

“I think like anything else when things start to get more automated there will be a good response to the true craftsman the hands-on cabinetmaker. I think this will elevate the craft of cabinetmaking to the level of artistry.”

At the north end of New Hanover County Mike Powells Coastal Cabinets anchors the extreme end of the cabinet shop spectrum. From this vantage during a career that has spanned his entire lifetime he observes the evolution of the industry.

Powell has spent 42 years as a second-generation woodworker. His father came to Wilmington in 1954 and eventually went into business for himself in 68.

“My earliest recollection was when I was 12 ” Powell explains. “I didnt go out and play on Saturday; I went and worked. Its what I know. Its all I know. And I dont know what I would do if I didnt do it.”

After working for his father until 1982 Powell ventured out on his own in 83 starting out with only one table saw.

“The business has gone from cabinets being built on site by carpenters with no interaction with customers to this ultra complex process of style finishes and function that asks the customer every possible question and gives them every possible option ” Powell says.

His current shop has been operating since 97 and with 12 employees it is one of the largest custom cabinet shops in Wilmington. Specializing in premium high-end cabinetry Powell and his team build as many as 25 projects at any given time with jobs ranging from $5 000 to $375 000.

Powell says one of the biggest industry changes has been the introduction of computerized machinery.

“Thats definitely a step up in the area of precision and it enables us to make high-quality products in less time ” he says.

The green movement has been a second significant industry change.

“We are truly trying like everybody to incorporate environmentally friendly resources ” explains Mike Perry Powells general manager for the last 15 years. “Even with the exotic stuff were trying to use more veneers renewable responsible materials and formaldehyde-free plywood.”

Powell stresses the importance of using these quality materials to produce quality results. His shop is one of the largest custom cabinet shops in Wilmington. From beginning to end an entire house can be completed in a few months although some more elaborate projects have required more than a year.

“Its a long ways from just putting standard cabinets together ” Powell furthers. “What we do is very very specific and very detailed Everything we work on is very individualized it depends on whatever that customers individual taste or style is and well add our little twist if they ask us to.”

The most important thing Powell learned from his father was customer satisfaction. “I didnt choose to be a cabinetmaker it just happened ” Powell says. “My father made sure I understood what it meant to work hard and to make sure the customer was happy with the finished product. I have been blessed with having the opportunity to work with literally thousands of very fine one-of-a-kind customers.”