Our annual Kitchens That Cook 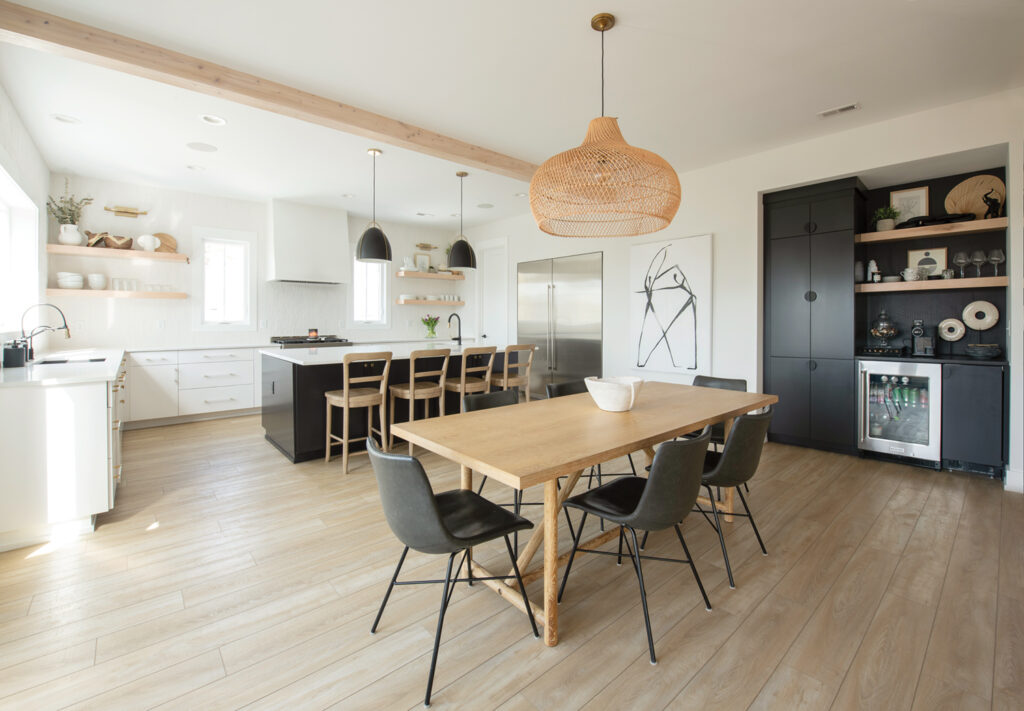 Celebrity chef Andrew Zimmern may have said it best: “Everything happens in the kitchen.”

The kitchen is the room that receives the most foot traffic. It’s where meals are shared, where important conversations take place, where memories are made, and where family and friends gather.

A kitchen can sell a house, and a good kitchen remodel can increase the value of a home.

Kitchen trends for 2022 include glazed and textured tile backsplashes with thinner grout lines, bold island colors, open shelving, and minimalism. If given the opportunity to build a new kitchen or renovate an old one, designers will advocate three things: set a budget, pick a style, and find inspiration.

The following six kitchens showcase different styles. Some have been transformed by renovation, others are newly built. Each has found inspiration through a variety of things such as a pendant light, a tree, a boat and a table.

An unexpected opportunity arose when Hurricane Florence caved in the ceiling of designer Suzanne Couri’s Wrightsville Beach kitchen in 2018. Given a fresh canvas, Couri began her sketch of a remodel using a beloved nine-foot table as her guide.

“That table was handmade up in Boone, it’s reclaimed pine barnwood. It never fit properly when it was confined to the little galley kitchen that used to be,” Couri says.

A raised counter area was taken down and a doorway closed off just for the table. Today it’s the gathering spot for card games, homework and entertaining.

“I think I’ve had 18 people around that table, it’s the heart of the whole house,” Couri says.

Influenced by South American patterns and textures, the Brazil native chose a Zellige handmade glazed subway tile to cover a wall in a soldier stack layout.

“I love that tile, each one is a little different and it’s vertical so it gives you more height. It’s also organized because the grout lines run together,” Couri says.

Countertops and open shelving by Coastal Live Edge are made of wormy maple using a modern waterfall edge.

“I like to play with neutral and modern. I use neutrals and textures that are organic, but I always like to have a really clean, modern line,” says Couri.

Woven basket pendants are from Bali. Known for creating live green walls for her clients, Couri says you can never have too many plants.

“Maybe because I grew up in Brazil, I like to always be surrounded around a lot of greenery. I incorporate it into everything,” Couri says.

The view out the kitchen window of the Bendjy home on Harbor Island feels much like being in a treehouse. The arms of a 100-year-old live oak surround the second floor, just as Bridget Bendjy envisioned during the design of the kitchen.

“I knew if I had to do the dishes, I wanted the sink to face that tree so I could look out at it. It’s why we didn’t do any upper cabinets, so it just feels as if the trees are in the house,” she says.

Bridget and Jason Bendjy and their three children lived in a one-story, 900 square foot house with a 100 square foot kitchen for 10 years before tearing it down to build new with Bell Custom Homes in 2020.

“There’s no denying the kitchen is a key space in the home today. We wanted to have some fun but be practical” says Cress Bell, owner of Bell Custom Homes. “You don’t have to overdo it for the sake of overdoing it, you can focus on a few key elements and have a bold presentation of the space.”

“There’s a ton of space for my little ones to cook and use, you can climb on it, jump on it, it’s indestructible,” Bendjy says.

Black framed windows are inspired by a Brooklyn warehouse Bendjy spotted while visiting her brother, and that city is also the source of the distressed brick tile creating an impactful two-wall backsplash.

There’s only so long one can live with a dark, dated kitchen. Elizabeth Sheats and her husband, Livingston, did it for about five years.

“The whole time I was thinking, ‘I hate this kitchen,’” laughs Elizabeth, artist, designer and mother of three. “I didn’t want to just paint the cabinets. I wanted to rip out the entire kitchen.”

In 2019 the Sheats family moved out of their 1950s ranch-style home in Forest Hills as their kitchen underwent a head-to-toe transformation.

“It felt good to completely start from scratch,” says Sheats.

“We wanted everything to be clutter-free and tucked away,” Sheats says.

The once closed-off kitchen, typical of 1950s floor plans, was opened up with a cut out into the living room. To brighten it up, the number of light fixtures went from two to 17.

“That’s a lot of lighting for one kitchen but it’s exactly the way I wanted it. Everything is on dimmers so I can light it up like a runway or calm it down,” says Sheats.

“I love turquoise and pink. I knew I wanted some pops of color,” she says.

A painting by fellow artist Daisy Faith entitled My Friend with the Big Kitchen Island hangs above a bamboo console table Sheats found on Facebook Marketplace and next to the pantry door purchased at Habitat for Humanity ReStore.

The kitchen in this 1920s-built home on 15th Street in Wilmington’s historic downtown was renovated in 2001 by previous owners Anna and Chuck Dietsche of Dietsche + Dietsche Architects. Twenty years later, it was the kitchen that appealed to Lucy Ann and Seth Laupus, who purchased the home in 2021.

“The kitchen is just so unique. I love the different colors,” says Lucy Ann. “In the morning, light pours in. The neighbor has camellias blooming; it’s really nice looking out into her garden and seeing the flowers and the birds, like a cottage-y feeling.”

Sharing a love for cooking, the Laupuses enjoy the blending of current features and appliances within the character of a historic home.

“It’s got the big sink and the big hose faucet like a restaurant and the hidden dishwasher. It’s modern, yet still feels old,” says Laupus.

“Aesthetically, the style of the kitchen is in keeping with the era in which the house was first built, 1920s craftsman bungalow,” says Anna Dietsche. “The walls have a deep plate rail for pottery display above 6-inch beaded wood paneling painted white.”

Instead of traditional cabinets, Dietsche + Dietsche had custom furniture pieces made, painted in rich pastels and adorned with unique hardware.

“The seafoam green piece we use for our pantry has door handles in the shape of peapods,” says Laupus. “I love that the walls and ceiling are painted a pale blue, it opens up the space. The kitchen is bright and happy.”

Scandinavian-style elements can be seen in this kitchen overlooking the marsh in Hampstead. A sharp contrast of black and white and texture beautifully exhibits Scandinavian minimalism, a concept characterized by simplicity and functionality where every piece has value and purpose.

“I wanted a kitchen functional enough where I would be able to move around while cooking with my husband and work together and have the kitchen be beautiful to look at, but functionality was my main concern,” says homeowner Renata Kuperus.

Kuperus is from Brazil and designer Julia Jacobsen is from Germany. Together they approached the making of the kitchen with European perspective.

“Coming from Europe, we have a completely different mindset when it comes to designing custom homes. We start with the kitchen and then design everything else around it,” says Jacobsen of Julia Jacobsen Design. “My clients are an international family. Renata will have her family coming from Brazil and they love to cook. We knew the kitchen was going to be the most important part of the house.”

A textured matte picket tile covers the back wall and is installed vertically.

“We wanted it to be very even and not a lot of contrast with the grout. We wanted the texture of the tile to speak more,” says Jacobsen.

Symmetry can be found throughout. All six floating shelves are aligned.

“If I can avoid upper cabinetry I usually do,” Jacobsen says.

“We went for clean and simple. Whenever you walk in, the kitchen takes your breath away,” says Kuperus.

When Tom and Twink Michel decided to build a second home overlooking the Intracoastal Waterway in the St. James community of Southport, they wanted the kitchen to reflect their love of boating.

“We have been boaters and lived on the water in Florida, we wanted certain things to look like you were inside a yacht,” Tom Michel says.

“We used unlacquered brass hardware that will patina over time, to get an aged salt air look that will bring in that nautical feel,” says kitchen designer Holly Cole Brown of Hollingsworth Cabinetry.

Instead of an overhang for seating at the island, the Michels chose a custom-built bar at the window.

“You can slide open the window to serve food and drinks outside,” says Brown.

“The barnwood ceiling sourced by Crane Building tied everything together beautifully. The exposed hinges on the cabinets and ladder really gave it the galley feel we were going for,” says interior designer of the home Sara Crane of Lizzy Mac Interiors. “The Michels had a clear vision of what they wanted and made this project so much fun,” Crane says.