Six Degrees East of Due South 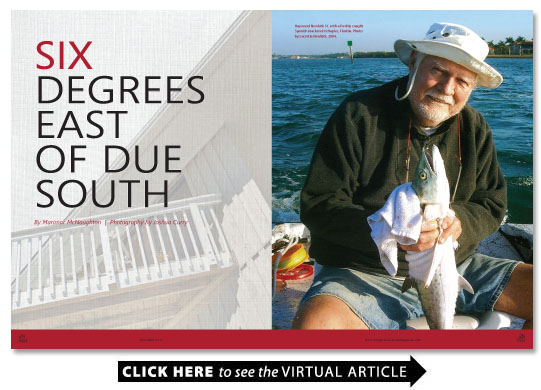 One of the most prolific architects of the south Atlantic coast Haywood Newkirk made his mark in Wrightsville and beaches south in the late 20th century. Wrightsville Beach Magazine spoke in person with Newkirk last spring before he departed for an extended visit to the big island of Hawaii and more recently by telephone from Naples Florida where he had just caught a pair of pompano that he planned to Cajun spice and grill for an early dinner athome.

Staying close to home is a safe bet for Newkirk but not because hell be 80 next year no; rather should he stray too far from his aesthetic his surroundings generally offend him. A confirmed modernist who graduated from North Carolina State Universitys School of Design in 1959 Newkirk says What screws up architecture is when you begin to paper over it when you begin to put hairy little details hairy little doodads the doodads killarchitecture.

Yet when trying to nail down the Haywood Newkirk idiom it appears so simple its almostelusive.

Case in point: Optimistic minimalism is how he refers to Wrightsville hotel condos hes designed like the Surf Suites Summer Sands and the HarborInn.

Architecturally theyre very clean and meet all the requirements plus dont detract from the reason you went there in the first place: thats for being on the beach and the views Newkirksays.

Or observe that the jagged roofline of the Fleet House on Figure Eight Island is not unlike the roof pitch on the Beane Cottage or the waterfront facade of the Bridge Tender restaurant and receive a dismissive Yeah well yeah when its obviously one of Newkirks recurring themes. Quizzed on what he might call the signature zigzag Newkirk says I dont know that Id call it anything.

His stubborn refusal to claim theres any connection between one building and another melts in a flood of anecdotes.

Doug Fleet owned Rebel Yell Distilleries and he owned the Budweiser place in Wilmington and he owned half of Richmond Virginia. He owned everything. He was a multi-multi millionaire. That wasnt a house Newkirk says referring to the Figure Eight Island property that was a glorified motel that he built for all his Wilmington employees.

The contemporary design follows the contour of the Figure Eight Island dune line and bears his signature zigzag roofline yet when he speaks of it Newkirk reduces his design to a series of units and one gathering place in the kitchen.

To be honest it aint a house its a motel he says before launching the next story. The whole idea of the Bridge Tender is the wildest conception or idea for a building you can imagine he says.

Newkirk designed the Bridge Tender for Eldridge Fergus who was known for his floating Cape Fear River restaurant Fergus Ark and the small local restaurant chain of the same name. As Newkirk tells the story Eldridge wanted to build a restaurant but he wanted it built out of a stack of old materials a pile of all kinds. He didnt want to buy anything. That restricted a lot of things I wanted to do. That building is the outcome and its pretty [expletive] good.

Built on the site of the old Faircloths Restaurant the Bridge Tender now in business since 1976 is one of dozens of modern landmarks designed by Newkirk in Wrightsville Beach.

From the Bridge Tender its less than a mile to Lees Cut the towns first planned townhome community where Newkirk designed the project commissioned by local builder Dallas Harris.

Dallas is Dallas Newkirk says. He would take liberties with the quality of materials the design. He did find out it would sell so he did it the way I drew it.

He wanted me to do a house but hed already sold all the property Newkirk explains. The only thing left was a little sliver of something he didnt even think he could build on but we did. On the west side of the house he had a big yacht. He had to be able to get on that boat tie the boat up there.

Newkirks client list reads like a whos who of Wrightsville Beach and Wilmington that later included Disney in Florida. For the Camerons with his architecture partner the late John Oxenfeld he designed contemporary beach homes in town and at Figure Eight Island. The partners won back-to-back Merit Awards in 1970 and 1971 from the American Institute of Architects North Carolina Chapter that are the first and only awards for two contiguous projects. But Newkirk was the primary architect when they won their first AIANC Merit Award in 1965 for the Welker House constructed on Circle Drive in Wrightsville Beach in 1964.

That little house was the first house built over there Newkirk says. On a lot valued at $1 800 Newkirk took five bids for the job that went to Alex Fonvielle. The low bid was $17 000. Built it and got my first AIA award for it. She was a school teacher. When she retired she sold it. I dont know how much she got but it was very high up in the hundreds of thousands Newkirk says.

It had that nice big exposed ceiling planked wood space. With smaller scale entrances smaller scale rooms that opened into outside spaces he says. Its all a matter of balance and balancing your spaces. Volumetric scale is what entices people. Different volumes have scale that can turn you on or turn you off.

Its no big deal but you have to be aware of it play with it. Always been a gathering space when man lived in caves you had to have a gathering space. Then you crawl up in a slot in a boulder or a hole in the wall. The spaces give you the comfort. And the views and the orientation give you all sorts of weather and light to wiggle around in.

Newkirk also designed and Fred Murray built the house next door to the Welkers on Circle Drive for Andy Bryant. David Brinkley reportedly bought one of Newkirks three units at what he calls Inlet View at the south end of Schloss Street at the entrance to the Coast Guard Station. There again the rake of three contiguous rooflines creates the signature zigzag and angle of the living rooms to the sun which are sited six degrees east of due south.

But the architect says The best piece of architecture on the North Carolina coast is at the north end of Wrightsville Beach.

On a semi-circular layout all the projects are facing six degrees east of due south which is the optimum solar angle there Newkirk says. He wanted to run a street right down the middle and put units on both sides. I wasnt going to do that. So I laid it out on a circle had the same number of units. Developers have it burned in their brain for so long that the lots need to be rectilinear. At Wrightsville Beach you had to have 8 000 square feet of property. Some of those lots are eight feet wide and 1 000 feet long but they all have waterfront they all have 8 000 square feet of land Newkirk explains.

Everybody was laughing and joking and whatnot. The first unit sold for twice as much as any other unit on Wrightsville Beach. Then they quit their laughing.

Newkirk retired to Florida in 1995 where his blackened pompano is drizzled with honeyed mustard and the juice of a fresh squeezed lemon. Last month he moved back to Wrightsville Beach.

This is part one of a two-part story. Part two will feature Newkirks residential architecture in February 2013.