Chivalry is alive and well. And to prove it Wilmington has its very own knight in residence: Thomas H. van Arsdale Esq. the only man with that distinction in the Carolinas one of only 1 000 Knights in the Most Venerable Order of St. John in the United States. 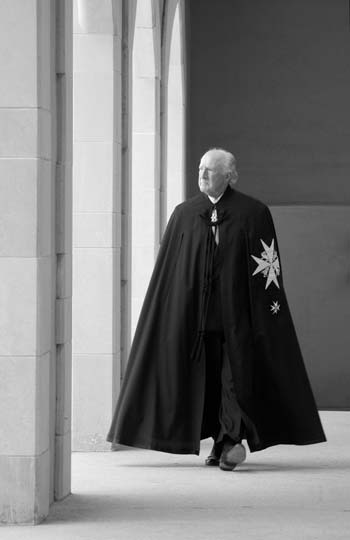 A soft-spoken articulate man impeccably dressed van Arsdale remembers every detail of his investiture into Knighthood last November. Medieval music played in the hallowed Washington National Cathedral setting the stage for audience members to imagine life in 1080 A.D. when the Benedictine monks the first members of the Order walked among the pilgrims in Jerusalem giving aid to the dying.

Back in the present van Arsdale walked in a solemn procession of men and women cloaked in long black robes holding multi-colored banners representing the various priories the religious houses.

“You walk down the center of Washington National Cathedral ” says van Arsdale. “You go through this elaborate medieval ceremony where you kneel down and Lord Prior puts his hands on your shoulders and says ‘Rise oh Knight of Grace.’ And whoosh! You think: Me? You’re talking about this little farm boy from New Hampshire? It’s very moving. It’s one of those occasions that few people have in their life where as you’re in the process of it if you’re like I am you say ‘Lord why is this happening to me?’”

Van Arsdale didn’t grow up wishing to become a knight. But even if he had there is no way to groom oneself for the position. “One never knows how it happens ” Sir Tom says.

About 15 years ago while he was serving as President and CEO of The Dime Bank of New Jersey a member of the Order asked van Arsdale to lunch with Reverend Cannon Andrews a Knight and Head Priest at St. Thomas’ Cathedral on New York’s 5th Avenue. Soon after that van Arsdale received a letter asking if he wanted to become a member of the Order. Since then he has risen through the ranks of the Order until reaching the highest pinnacle available to him knighthood. Above him in rank are Knight Baliff for which royal blood is required the Lord Prior the Duke of Gloucester and the Queen of England.

The mission of the Order which sponsors an eye hospital in Jerusalem is to fill its ranks with men and women who serve their fellow citizens both by their charitable nature and charitable deeds.

While working in the banking industry for most of his adult life van Arsdale gave back to the community serving on numerous academic and cultural boards. Everywhere he went he brought his knack for remembering names and details and a curiosity and kindness that make him unique.

“People don’t know how to take him ” says his wife Susette who worked with him at the bank. “Nobody’s that nice. But he really is that nice. He’s one of those people who remember every cashier’s name at Harris Teeter.”

Upon moving to Wilmington in 1999 Sir Tom jumped right into community work joining the Cameron Executive Network at UNCW’s Cameron School of Business acting as chair and trustee of the Cameron Art Museum and serving on the New Hanover County Community Emergency Response Team among other activities.

As he did in the St. John’s Order van Arsdale rose through the ranks in the banking industry from a teller to head of one of the largest thrifts in northeastern Pennsylvania always asking what he needed to know to move up. Without a degree from a four-year college his options were limited at the beginning but he learned in the Army to trust his ability and pushed forward saying “Yes Sir I will.”

Van Arsdale’s rise in the Army ranks was meteoric as well. He failed to qualify as a marksman and the Army was left wondering what to do with their new recruit. They held him over for IQ testing and soon discovered they were dealing with a man with Mensa-level intelligence. 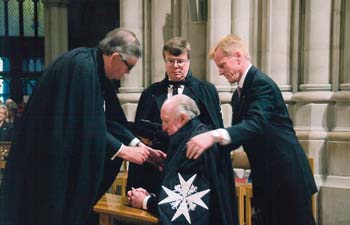 They decided to place him in training to learn cryptography the mathematics of encoding and decoding and shipped him off to Fort Gordon in Georgia where he qualified to receive Top Secret clearance. In the process of vetting him they interviewed his high school principal a man who several years earlier had told him “Do your parents and colleges a favor and don’t go to college.”

“I’ll tell you what I can tell you ” is how he speaks about his experience as a cryptographer in North Depot in Romulus New York giving the experience a cloak and dagger appeal. Up until five years ago when the Freedom of Information Act exposed that location van Arsdale never told anyone where he’d been stationed although anti-war activists like Dr. Benjamin Spock discovered the site and staged protest demonstrations there in the early 1980s.

But the information for that period still remains classified and van Arsdale can only give broad brush strokes about his activity over that year-and-a-half. He speaks about living in the town and entering his workplace in civilian clothes keeping his job secret from the townspeople. He passed through several checkpoints before donning his uniform.

At work he would have to look up clearance levels before releasing any information to the officers on base. Many times he’d have to ask his superior to find someone with high enough clearance to receive the message he had just decoded. Messages from all around the globe passed through his hands and he was able to glean a sense of the world that others could only imagine. The amount of responsibility thrust on the young van Arsdale matured him quickly.

The responsibility taught van Arsdale another lesson: “Sometimes you have to do something you don’t want to do for someone that you really don’t care about. But if it’s your boss you salute him and say ‘Yes Sir.’ I’d be happy if both of my sons were to go into the service at some point.”

Sir Tom has been married for 23 years to Susette who is also a member of the Order of St. John (one of only a few couples involved in the Order). They have two sons Tommy 22 and Matthew 12. An older dad (Sir Tom is approaching age 72) he talks about the contrasting experiences he’s had with his boys. The older one knew him as the bank president dressing up to go to the symphony; the younger boy sees him as someone who drives him to school and takes him to friends’ houses: Sir Tom the carpooler.

Although Knighthood cannot be passed on to his sons they are witnesses to the honor bestowed upon their father. They can see the pictures of him dressed in the somber robes of the Order see the responsibility the regal quality of the pomp and circumstance surrounding the celebration of his elevation through the ranks.

As for van Arsdale’s view of things Knighthood has changed him forever. “Being set aside and chosen to receive that honor is extraordinary to me ” he says. “And I still ask ‘Why me?’ Part of my obligation is to extend to others an even greater hand.”

Sir Tom is allowed to add the letters signifying Knighthood after his name but has chosen not to. “It’s like saying ‘Look who I am ’” a sentiment to which he does not subscribe. But if you do see him around town you’ll realize you don’t need the robes or the initials to know you’re meeting an extraordinary human being — with a gift for chivalry.