Sparks flew the day Lamar and Gladys Beach married 55 years ago and they did once again on the occasion of the couples wedding anniversary one month ago on July 4. 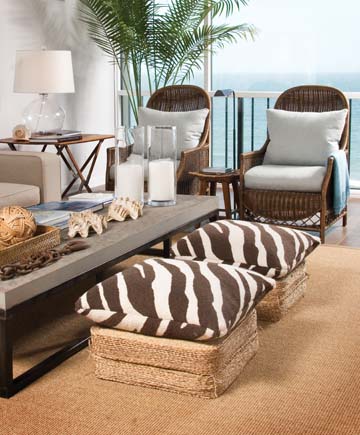 As their clan ended a day of sunbathing swimming and grilling more than two dozen well wishers gathered at the couples swanky Wrightsville nest. The moon nearly full rose over the ocean and the fuses were lit for a spectacular fireworks display that snapped crackled and popped from the north to the south end of the beach strand as far as the eye could see in all directions.

Inside The Islanders top floor the Beach family toasted to Lamar and Gladys. “Being here the week of the Fourth has become a kind of tradition with the family ” Lamar says. The condo he adds is a gathering place where the elders often reminisce about the past.

Alabamans who found their way to Wrightsville by way of Charlotte North Carolina; Greenville South Carolina; and Wyckoff New Jersey the Beaches landed once and for all in the Tar Heel state in 1970. They took up residence in Sanford before they discovered Wrightsville Beach at a time when their children Jeff and Melanie were very young. Gladys says after summers spent in Myrtle Beach she was afraid they wouldnt like it here but Jeff at 14 was hooked by pier fishing staying out until 10 or 11 oclock at night; and Melanie then 12 took to the water. “I can remember taking the boat all by myself all over this island when I was 16 years old before it got too crowded ” she says. Gladys recalls “We never worried about them.”

In 1980 the family of four settled into its first summer home the southeast corner 10th floor three-bedroom condo commanding views of the barrier island that had become their year-round playground. With living rooms looking over the ocean and the master suite overlooking the sound side each sibling had a private bedroom and shared a bath. There was a small kitchen squeezed into the floorplan.

As the family grew first with spouses then with grandchildren Lamar jumped at the chance to buy the adjacent two-bedroom unit in 1990. Through a passage between the two each with its own living area and kitchen the square footage almost doubled. The second kitchen was converted into a wet bar and a sun deck was added on the rooftop. 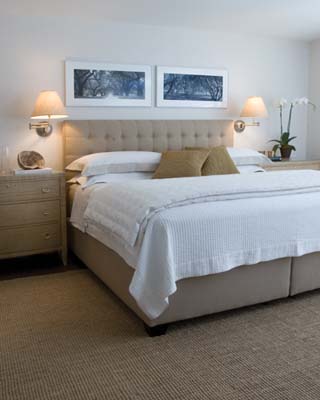 Several years ago after the completion of a permanent Landfall home for Lamar and Gladys local builder Nick Garrett was called in to help with a massive renovation of the five-bedroom four-bath condo that has been all but turned over to Jeff and his wife Mary Beach and Melanie and her husband Charles Abbott; though its clear that Lamar the patriarch still calls the shots. “I remind them that Im still the owner and Im still paying for it ” he jokes.

With the hands of fate fortune and foresight having been so good to the Beaches Lamar for the sake of fairness conducted a lottery for first choice of the master bedroom. When Jeff won he selected the oceanfront master suite in the two-bedroom wing that he and Mary now share with their niece Casey.

Christopher Ostafin Mary Beachs dear friend from their New York City stint at Bergdorf-Goodman was hired to redesign the interior space. The two met 30 years ago when Ostafin was consulting for the visual department and Mary was a buyer of designer evening wear. Since then he has styled her wedding her matrimonial New York apartment and the interior of her Greensboro home.

For the family compound Ostafin smoothed out all the wrinkles seamlessly blending the two condos into one elegantly understated expression inspired by the sunlight welcomed through floor-to-ceiling sliding glass doors; the water mirrored in textured white wall coverings; and the sand restated in the selection of sisal and sea grass rugs woven chairs and baskets and crisp cotton/linen upholstery.

Ostafin says “The interior should look contemporary to now and should also look appropriate to the style of the building. What I like about it is that its simple clean and very serene.”

Removing all remnants of the condos origins Ostafin redirected the primary entrance toward a new foyer. From this port of entry the penthouse floats from the highest elevation anywhere on Wrightsville.

In the shared spaces Ostafin modified the interior living room dining room and kitchen. The former wet bar was incorporated into the fabric of the open kitchen and that area now a gaming corner also functions for satellite dining.

During the renovation Garrett and his team took the interior down to the studs while Ostafin narrowed the elements in his design presentation.

Corrugated walls in the main gathering areas revive an age-old technique of dragging plaster with a wire comb. Sand-blasted wall coverings in secondary rooms and a vermicelli pattern in a master bedroom are subtle variations of an all-white palette.

Ostafin married Marys attachment to earthy tones with Melanies love of sea glass colors which opened the door for some pale blue and green tints. “It was a great inspiration for me ” Ostafin says. “It was very easy for me to work with.”

The selection of finishes continued with the choice of flooring. Conveniently Jeff Beach owns a prefinished flooring company and worked with Ostafin to select rift-and-quarter-sawn white oak stained chocolate brown to resemble old tobacco barnwood. The one-quarter-inch planks are laid in five-inch and seven-inch widths in a five-five-seven-five-seven pattern grounding the interior. “The floors were very important ” Ostafin says “because they were going to be the one unifying factor.”

To anchor the long sofa he adapted the design of a stone slab-and-iron conversation table that was fabricated with rock from Sellers and then welded by a local ironworker. The dining table was also a variation of a previous design. “The goal was being able to seat the primary family members all at one table ” Ostafin says.

“We wanted to have a place where we could all be together ” Mary says “and when we are all together there are 11 people.” 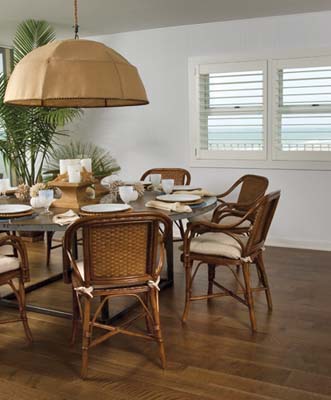 Covered with zinc the round table was doused with salt water to oxidize the metal creating a unique patina that will continue to cure over time. A burlap fixture enlightens their gatherings and illuminates a still life of white candles shells and starfish.

Generations of family notwithstanding the blending of personal styles was achieved with select accessories and through a collection of photographs squarely matted and framed abstract vignettes of local scenes articulated by Doug Kazantzis.

“I thought it would be neat to have a local artists work on the wall ” Mary says.

Each family member chose the photos that spoke to them and Ostafin commissioned Kazantzis to photograph the Islander beachfront creating images for the living room that were very personal to the space.

“I was pushing him ” Ostafin says “to have a single line through it the water and land line and then we manipulated it to get the color.”

The elevated views of Wrightsvilles watery moat are staggering. With the light adjusted by shuttered white screens this is the scene that Melanie and Charles awake to each morning and where the sun sets each evening over their private balcony. Their bedroom is simply furnished with oversized lidded baskets purchased locally covered with glass tops to double as tabled blanket chests.

They share the southwestern bedroom wing with their sons Justin 17 and Clark 15; and nephews Taylor 20 and Drew 18. The two boys rooms were similarly decorated with different bed linens and tableside books reflecting shared interests in sports (baseball for Justin and Clark) and travel (to Africa for Taylor and Drew). The cousins share a bathroom tooled with private toiletry drawers and monogrammed towels.

“Its nice to be able to come down and stay here to visit mom ” Melanie says.

The distance is only two hours from her home in Raleigh and for Jeff and Mary just three hours from their Greensboro address.

On those occasions that all are assembled everyone gathers at the condo for Lamars hearty Sunday breakfast after church: a feast of scrambled eggs garlic cheese grits and country ham and biscuits. “Thats kind of been tradition ” Melanie says. “Its come from when we were all here together.”

In the mornings Lamar likes to take his coffee out to the balcony furnished by Ostafin with low seating to preserve the horizon line. On summer afternoons when the sun arcs to the south shaded and cooled by the ocean winds it is a perfect place for Mary to sit and read. Melanie the sun worshipper sets up camp on the beach. “Its my favorite place in the world ” she says. “I could stay out from early morning until dark if it was my choice. I just love it. I love the ocean I love the sound. I like the peacefulness.”