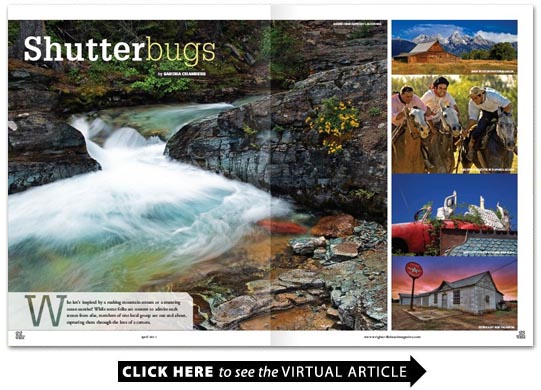 Who isnt inspired by a rushing mountain stream or a stunning ocean sunrise? While some folks are content to admire such scenes from afar members of one local group are out and about capturing them through the lens of a camera.

For the past 24 years the Cape Fear Camera Club has been helping photographers of all skill levels learn more about their craft and connect with others who share their passion.

Cape Fear Camera Club president John Respess says his main goal this year is to get more people involved in the club. “There are so many opportunities available including speakers workshops competitions field trips social events and exhibitions.” For example workshop chairman Richard Haas has planned monthly workshops for beginners to more experienced photographers. “Weve also brought in some great speakers such as the internationally-known photographer Adam Jones who spoke at our November meeting our first ever joint meeting between CFCC and the Coastal Carolina Camera Club ” Respess says.

What Members are Saying

Taylor and Bonnie Johnson of Landfall have been members of the Cape Fear Camera Club for five years. When they moved to Wilmington six years ago from Maryland Taylor says he began going to Wrightsville Beach to take ocean shots.

“For me the most valuable part of belonging to the club is participating in the competitions ” Taylor says. “You get to see great photography by other club members receive a critique of your own work and just have fun. The workshops have also been very valuable.”

Greg Saunders joined the club three years ago when he and his wife moved to Wrightsville Beach from Durham. “Ive been taking photos for more than 30 years and I thought the club would be a good way to meet people who have the same passion I do ” Saunders says. “I have enjoyed finding out about all the great places to shoot around the area such as Airlie Gardens Orton Plantation Green Swamp etc.”

Wilmingtons Barbara Hoenig is a new member this year. She says she heard of the club through a friend at work. “Im excited. Im finally getting a digital SLR for my birthday and I want to learn how to get the most out of my new camera ” Hoenig says.

Behind the thriving club that exists today are two members who had a vision early on for how a camera club might enrich others lives. Founding and current member R.J. Thompson says he was taking some photography classes at Cape Fear Community College in the 1980s and had a desire to bring together people who enjoyed photography. “My professor Mark Miller encouraged me to go ahead and try to get a camera club started and that was how it all began ” Thompson says.

In the summer of 1987 Thompson put out flyers to see if anyone was interested in forming a club. The first organizational meeting took place July 8 at Cape Fear Community College with about 15 people attending. Two weeks later another meeting was held to form a board and draw up bylaws. “There actually was another camera club in the area before us ” Thompson says “but it only lasted about a year. Bob Runyan who was a member of that club helped us with the bylaws.”

The first official meeting of the Cape Fear Camera Club took place the third week of September 1987 at Cape Fear Community College. By the end of the first year there were between 25 and 30 members including Wayne Upchurch who was a Star News photographer. The first president was I.M. Blaustien who served for six months followed by Thompson who served during the clubs second six months.

Thompson remembers the clubs first field trip. “Cape Fear Camera Club members were invited aboard the Henrietta II to take photos of its inaugural cruise on
April 2 1988. “We all took pictures and later presented the owner with a scrapbook of the images ” Thompson says.

Another founding member Robert Neale was teaching chemistry and photography at the University of North Carolina Wilmington when the club formed. Because of his relationship with the university the club moved its meeting place to UNCW and continued to meet there until 2010 when it moved back to Cape Fear Community College.

Neale served as president of the club from 1988-1990 and again in 1999 and 2003. He also oversaw the clubs photography library which he kept on a cart in his office and wheeled to meetings. “Eventually it became too difficult to maintain the library ” Neale says “and we donated all the books to the Randall Library.”

“One of the interesting activities of our early years as a club was a sort of pen pal relationship with a photography club in England ” Neale says. “We used to trade prints for some contests and some of their members even came over to visit us and some of our members went there.”

The club continued to grow during the years it has as large a membership today as it had in the early 1990s then tapered off in the mid 1990s. Neale speculates that this membership decline coincided with a transition in the field of photography. “You have to remember that everything back before then was film and slide photography ” he says. “A few people in the club did black and white photography but most seemed to gravitate toward color photography. Then digital came on the scene and for a couple of years there was a lot of discussion as to whether digital photography should be allowed to compete against more traditional photography. The transition took a while but once digital got established thats pretty much what everybody did. Its certainly easier that way. Cameras can do amazing things and digital quality is just as good or better than film ever was.”

Today most club members continue to use digital camerasboth SLR (single-lens reflex) and point and shoot. Of the clubs 100-plus members most are amateurs who enjoy photography as a hobby. Club competitions are held six times a year (three digital and three print) with a theme assigned for each contest such as landscape architecture street scenes and portraits. There are two skill levels beginners/intermediate and advanced. Judges for the contests are professional photographers outside the club. Red and blue ribbons are awarded as well as ribbons for best of class. The Cape Fear Camera Club is also a member of the Photographic Society of America and participates in interclub competitions four times a year.

Winning photographs from all competitions can be viewed on the clubs website www.capefearcameraclub.com “Our website provides valuable information to all our members ” says Steve Bouton web master. “The calendar lists meeting dates competitions field trips and more.” In addition a monthly newsletter keeps club members informed about a variety of topics.

New this year and free to members is an online photo gallery. In addition many learning tools are available on the site such as links to various photography websites and valuable photo PSS links (a way to connect to a variety of online databases and mainframe systems). There is also a forum on which members can pose questions or post photos for critiques by other members.

Providing a way for members to show off their photography is also something the club does. “I think its important for the community to see what local photographers are doing ” says JoAnn Tomaselli chair of the exhibit committee. “One of our biggest exhibits is an all-member exhibit at the Northeast branch of the New Hanover County Library which usually runs for a month in November. This year there were 70 images on display.”

Some club photographers are named end-of-the-year winners selected in May. Their work will be displayed from June 26 through July 31 at Caff Phoenix and at UNCWs Cultural Arts Building Gallery during the months of June and July 2011.

At each of the clubs monthly meetings a professional photographer is invited to speak to members. Beginning this year monthly member workshops have also been planned and have included topics such as basics of the camera tips for better photography and an overview of Lightroom and Photoshop.

Richard Hass past president and current chair of the education committee says he believes the workshops are a crucial part of the club. “A good number of the members join the club because they want to learn more about photography ” Haas says “and workshops are one way to help them improve their photography skills.”

“Field trips are another great opportunity for people not just to practice their photography skills but to socialize and meet other people in the club ” says Vickie Kohler chair of the field trip committee. “This year three field trips are planned to Silver Coast Winery Oakdale Cemetery and Bald Head Island.”

The camera club also believes in reaching out to the community and for the past two years has given a $500 scholarship to a student pursuing the study of photography in college.

Millie Maready the clubs treasurer and a member for 15 years sums up the feelings of many of her fellow club members: “Photography is my hobby and my passion and being around people with the same interests and learning from them is what the Cape Fear Camera Club is all about.”