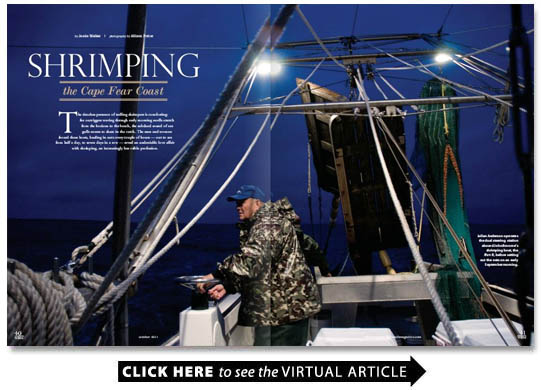 The timeless presence of trolling shrimpers is comforting:
the outriggers waving through early morning swells stretch from the horizon to the beach the subdued sound of sea gulls swarm to share in the catch. The men and women aboard these boats hauling in nets every couple of hours out to sea from half a day to seven days in a row reveal an undeniable love affair with shrimping an increasingly less viable profession.

Captain Ernest Bud George born and reared in Wilmington on the Masonboro Sound near Whisky Creek has been shrimping and fishing since age 7. His father he says was the saltiest of Old Salts. Alongside the creek down on the sound Monroe Tucker George owned Trails End Restaurant from 1945 to 1958. Tucker George supplied most of the seafood for the restaurant and kept Bud busy shucking oysters and peeling shrimp before the dinner crowd arrived.

Growing up on the sound surrounded by watermen offered young George a taste of what he could never quite get enough of.

George started working on shrimp boats when he got out of the service in 1958 and he hasnt been off a boat since.

For more than 20 years he worked for boat Captain Eddy Haneman and later Beverly B.C. Costin local shrimping figureheads at the docks beyond Hieronymous Brothers fish house on Airlie Road where the Fish Market restaurant is today.

As a deck hand on Hanemans and Costins boats George travelled north to the shrimp-rich Pamlico Sound and south to Florida often staying on the boat for up to seven days at a time. Later George took a leap and became the captain of his own boat a 37-foot shrimper. He named the boat Miss Dorothy after the “biggest catch of his life ” his wife Dorothy George.

Aboard Miss Dorothy with one other mate George was able to make a fine living selling shrimp caught from the mouth of the Cape Fear south to Holden Beach. Out for less than twelve hours at a time he sold to local residents and restaurants.

“Theres no comparison to the way it was back then ” George says. There were thirty-five shrimp boats parked at the drawbridge at Wrightsville hundreds at Southport alone not to mention the numerous Varnam-built boats down at the Varnamtown and Holden Beach docks. The shrimp were big and plentiful.

“Everythings changed now ” he says. There are no more than a couple of commercial shrimpers docked at Wrightsville and all but the lonesome Cape Point belonging to the young fifth generation shrimper Royce Potter of Potters Seafood have vanished from Southport once known as the fishing capital of the North Carolina coast.

“The only thing that hasnt changed ” Potter says “is the price.” Potters father Leroy and his uncle John Tookie Potter were quoted in the Star News in 1974 charging $2.75 per pound a quarter less than Royce Potter charged for his latest catch. With shrimp prices dropping during the last three decades diesel fuel prices are now more than three times what they were in the 70s.

Potter says that competition from international suppliers forces him to keep his prices down.

Farm-raised shrimp imported from all over the world and wild caught commercial shrimp harvested a week to two weeks before its sold from grocery stores and large-scale fish markets are supplying the demand for more and more shrimp at dinner tables and in restaurants. But thats just one of the pressures threatening Potter and the dwindling number of area shrimpers.

Heavy polluting of the Cape Fear River has turned the once popular shrimp spawning ground into a nearly defunct crustacean nursery. Federal regulations requiring Turtle Excluder Devices (TED) in the 1990s leave large holes in the once tightly-woven opening of nylon shrimping nets that area shrimpers claim allow for significant shrimp loss. Hurricanes and beach renourishment have piled loads of sand on the once muddy sea floor that shrimp need to thrive the Wrightsville and Carolina Beach coasts making the Wrightsville Beach area a last resort for most shrimpers.

George said the mouth of the Cape Fear was the first spot to hit back in the 60s where the shrimp averaged 21 to 25 count or 21 to 25 shrimp per pound in the peak of the season. Now he says the shrimp there have all but disappeared. Potter had been out the week before and brought in 20 to 30 count. Very large shrimp are 16 count.

“At low tide it smells like hog waste ” Potter says of the river.

George still fishes in the area but has all but given up on shrimping there. Last year hearing that the shrimp had made a small comeback he threw in his nets to test his luck.

“I dragged my nets and they were all mucked up with this slimy chemical. I called the environmental people and they said theyd send somebody down there. Whether they did or not I have no way of knowing ” George says.

Rich Carpenter in the Marine Fisheries division of the North Carolina Department of Environment and Natural Resources in Morehead City says that he remembers a similar report issued last year but that they get so many calls related to the area theres no way to know if it was the same one. All reports he said are thoroughly investigated.

Danny Galloway a long-time shrimper out of Holden Beach was quoted in The Carolina Watermen: Bug Hunters and Boatbuilders. Authored by Richard and Barbara Kelly and published in 1993 Galloways comments then about the Cape Fear predicament ring true today:

“Our main shrimp comes from the Cape Fear the biggest river. They got paper plants steel plants all the way up the middle of the city. While theyre trying to clean it up now for years they dumped raw sewerage into the river. That will always do away with us quicker than the marketing. There are enough local sales here that youd probably get by with. Sometimes we get a little bit better than market price. Im afraid theres just not going to be any more shrimp.”

Aside from pollution over-fishing has also proved problematic. Years ago Cape Fear and other sensitive areas were closed early in the season to allow developing shrimp to grow. Now George says closures are rare and too many commercial and recreational shrimpers dont use discretion in the all-important nursery areas. The shrimp are caught before they can continue the cycle; much less grow big enough to sell.

George says that while he used to debunk the disappearing shrimp theory that Galloway spoke of as a glorified myth after years of watching the shrimp size and count dwindle hes now willing to wager that in ten years there will be no shrimp to be had in this area.

Potter is more optimistic. “Shrimp can lay up to 250 000 eggs every three days and they have a life span of twelve to eighteen months. They reproduce so fast and with such volume that Id say they are pretty resilient.”

Potter says that although he and his wife April have to work more for less given new stringent federal regulations geared to decrease by-catch in shrimp nets the dwindling shrimp population which he attributes to pollution and a voluntarily more sustainable approach to the business that its all worth it.

“Our customers appreciate it ” Potter says.

Standing on the deck of the Cape Point docked in front of the quaint yellow seafood shack with its towering outriggers overhead lines neatly taught April Potter lunges slightly toward their exploring toddler A.J. She says she misses her twelve-hour stints on the Cape Point.

“I never had trouble sleeping when I got off the boat. Walking maybe but never sleeping!”

She goes on to to say that she attributes their methods pulling the nets every 45 minutes instead of the standard three hours constantly adjusting the nets to keep them six to eight inches off the bottom to the quality product they unload at the end of the day.

“Our customers accuse us of dipping our shrimp in syrup ” she says.

Jonathon Broome recreational shrimper out of Carolina Beach formerly a federal government employee can relate. Shrimp dont have to smell shrimpy he says.

“Customers have asked me why my shrimp dont smell like shrimp” he says chuckling. “A lot of people dont know the truth about the shrimp market.” He refers to the freshness of the shrimp.

Shrimp can sit on boats in markets and on trucks for weeks at a time treated with preservatives such as sodium bi-sulfate while local shrimpers Broome George and Potter sell most of their catch the day they come in.

With changes in the local shrimp population and overpowering international competition Broome says small-time local shrimpers have an advantage.

“If youre going to survive in this industry retailing is the way to go.”

Aboard Brooms boat the sparkling Plan B equipped with stainless steel rigging like all modern shrimp boats a tickler chain to get the shrimp up a try net to test the area and two giant nylon nets Broome says that even with provisions such as the TED that by-catch is inevitable.

“By-catch isnt good for anybody ” Broome says. Decreasing drag time makes the shrimp tastier bruises them less and it also increases the chances for by-catch survival once released.

While TEDs are responsible NOAA reports for saving 97 percent of all endangered sea turtles the significant shrimp loss that it causes troubles long-time shrimpers. Broome recently received a grant to research effects of decreasing the size of the TED opening. His research shows an insignificant shrimp loss of 2 percent with no turtles trapped in nets.

Broom Potter and George all say that Wrightsville Beach is not really worth trolling these days. Too many party boats commercial fishermen recreational traffic and a sandy bottom make it undesirable for shrimpers.

Although George turned in his shrimping hat when he sold the Miss Dorothy last year he still oysters crabs or jumps onboard a fellow shrimpers boat when he can.

“It keeps the wolf away from the door ” he says smiling.

The Potters are not daunted by the overcast shrimping climate. They are hopeful that their family tradition dating back to 1899 will be carried on.

“We cant wait to get him out there ” she says.