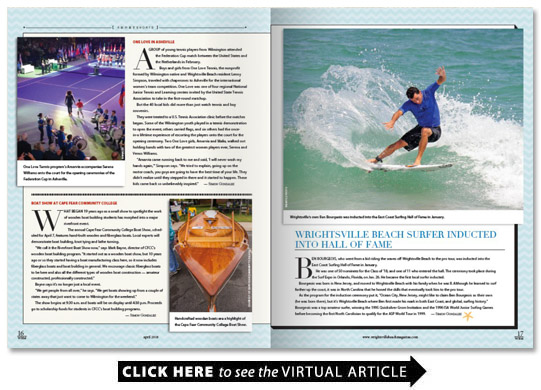 One Love in Asheville

A group of young tennis players from Wilmington attended the Federation Cup match between the United States and the Netherlands in February.

Boys and girls from One Love Tennis the nonprofit formed by Wilmington native and Wrightsville Beach resident Lenny Simpson traveled with chaperones to Asheville for the international women’s team competition. One Love was one of four regional National Junior Tennis and Learning centers invited by the United State Tennis Association to take in the first-round matchup.

But the 40 local kids did more than just watch tennis and buy souvenirs.

They were treated to a U.S. Tennis Association clinic before the matches began. Some of the Wilmington youth played in a tennis demonstration to open the event others carried flags and six others had the once-in-a lifetime experience of escorting the players onto the court for the opening ceremony. Two One Love girls Amarvia and Malia walked out holding hands with two of the greatest women players ever Serena and Venus Williams.

“Amarvia came running back to me and said ‘I will never wash my hands again ‘” Simpson says. “We tried to explain going up on the motor coach you guys are going to have the best time of your life. They didn’t realize until they stepped in there and it started to happen. These kids came back so unbelievably inspired.”

What began 19 years ago as a small show to spotlight the work of wooden boat building students has morphed into a major riverfront event.

“We get people from all over ” he says. “We get boats showing up from a couple of states away that just want to come to Wilmington for the weekend.”

The show begins at 9:30 a.m. and boats will be on display until 4:30 p.m. Proceeds go to scholarship funds for students in CFCC’s boat building programs.

Ben Bourgeois who went from a kid riding the waves off Wrightsville Beach to the pro tour was inducted into the East Coast Surfing Hall of Fame in January.

He was one of 50 nominees for the Class of ’18 and one of 11 who entered the hall. The ceremony took place during the Surf Expo in Orlando Florida on Jan. 26. He became the first local surfer inducted.

Bourgeois was born in New Jersey and moved to Wrightsville Beach with his family when he was 8. Although he learned to surf farther up the coast it was in North Carolina that he honed the skills that eventually took him to the pro tour.

As the program for the induction ceremony put it “Ocean City New Jersey might like to claim Ben Bourgeois as their own (he was born there) but it’s Wrightsville Beach where Ben first made his mark in both East Coast and global surfing history.”

Bourgeois was a top amateur surfer winning the 1995 Quicksilver Grom Invitation and the 1996 ISA World Junior Surfing Games before becoming the first North Carolinian to qualify for the ASP World Tour in 1999.