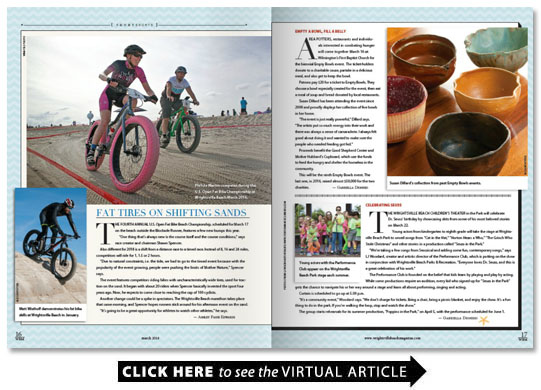 The fourth annual U.S. Open Fat Bike Beach Championship scheduled for March 17 on the beach outside the Blockade Runner features a few new bumps this year.

“One thing that’s always new is the course itself and the course conditions ” says race creator and chairman Shawn Spencer.

“Due to natural constraints i.e. the tide we had to go to the timed event because with the popularity of the event growing people were pushing the limits of Mother Nature ” Spencer says.

The event features competitors riding bikes with uncharacteristically wide tires used for traction on the sand. It began with about 20 riders when Spencer basically invented the sport four years ago. Now he expects to come close to reaching the cap of 100 cyclists.

Another change could be a spike in spectators. The Wrightsville Beach marathon takes place that same morning and Spencer hopes runners stick around for his afternoon event on the sand.

“It’s going to be a great opportunity for athletes to watch other athletes ” he says.

Empty a Bowl Fill a Belly

Area potters restaurants and individuals interested in combating hunger will come together March 16 at Wilmington’s First Baptist Church for the biennial Empty Bowls event. The ticket-holders donate to a charitable cause partake in a delicious meal and also get to keep the bowl.

Patrons pay $20 for a ticket to Empty Bowls. They choose a bowl especially created for the event then eat a meal of soup and bread donated by local restaurants.

Susan Dillard has been attending the event since 2008 and proudly displays her collection of five bowls in her home.

“The event is just really powerful ” Dillard says. “The artists put so much energy into their work and there was always a sense of camaraderie. I always felt good about doing it and wanted to make sure the people who needed feeding got fed.”

Proceeds benefit the Good Shepherd Center and Mother Hubbard’s Cupboard which use the funds to feed the hungry and shelter the homeless in the community.

This will be the ninth Empty Bowls event. The last one in 2016 raised almost $50 000 for the two charities.

The Wrightsville Beach Children’s Theater in the Park will celebrate Dr. Seuss’ birthday by showcasing skits from some of his most beloved stories on March 22.

Young actors from kindergarten to eighth grade will take the stage at Wrightsville Beach Park to unveil songs from “Cat in the Hat ” “Horton Hears a Who ” “The Grinch Who Stole Christmas” and other stories in a production called “Seuss in the Park.”

“We’re taking a few songs from Seussical and adding some fun contemporary songs ” says LJ Woodard creator and artistic director of the Performance Club which is putting on the show in conjunction with Wrightsville Beach Parks & Recreation. “Everyone loves Dr. Seuss and this is a great celebration of his work.”

The Performance Club is founded on the belief that kids learn by playing and play by acting. While some productions require an audition every kid who signed up for “Seuss in the Park” gets the chance to navigate his or her way around a stage and learn all about performing singing and acting.

“It’s a community event ” Woodard says. “We don’t charge for tickets. Bring a chair bring a picnic blanket and enjoy the show. It’s a fun thing to do in the park. If you’re walking the loop stop and watch the show.”

The group starts rehearsals for its summer production “Poppins in the Park ” on April 5 with the performance scheduled for June 1.