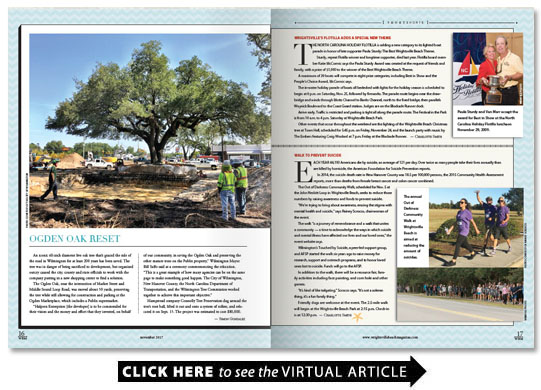 An iconic 60-inch diameter live oak tree that’s graced the side of the road in Wilmington for at least 200 years has been saved. The tree was in danger of being sacrificed to development but organized outcry caused the city county and state officials to work with the company putting in a new shopping center to find a solution.

The Ogden Oak near the intersection of Market Street and Middle Sound Loop Road was moved about 50 yards preserving the tree while still allowing for construction and parking at the Ogden Marketplace which includes a Publix supermarket.

“Halpern Enterprises [the developer] is to be commended for their vision and the money and effort that they invested on behalf of our community in saving the Ogden Oak and preserving the other mature trees on the Publix property ” Wilmington Mayor Bill Saffo said at a ceremony commemorating the relocation. “This is a great example of how many agencies can be on the same page to make something good happen. The City of Wilmington New Hanover County the North Carolina Department of Transportation and the Wilmington Tree Commission worked together to achieve this important objective.”

Hampstead company Connolly Tree Preservation dug around the tree’s root ball lifted it out and onto a system of rollers and relocated it on Sept. 15. The project was estimated to cost $80 000.

Sturdy repeat Flotilla winner and longtime supporter died last year. Flotilla board member Katie McCormic says the Paula Sturdy Award was created at the request of friends and family with a prize of $1 000 to the winner of the Best Wrightsville Beach Theme.

A maximum of 30 boats will compete in eight prize categories including Best in Show and the People’s Choice Award McCormic says.

The in-water holiday parade of boats all bedecked with lights for the holiday season is scheduled to begin at 6 p.m. on Saturday Nov. 25 followed by fireworks. The parade route begins near the drawbridge and winds through Motts Channel to Banks Channel north to the fixed bridge then parallels Waynick Boulevard to the Coast Guard station. Judges are on the Blockade Runner dock.

Arrive early. Traffic is restricted and parking is tight all along the parade route. The Festival in the Park is from 10 a.m. to 4 p.m. Saturday at Wrightsville Beach Park.

Other events that occur throughout the weekend are the lighting of the Wrightsville Beach Christmas tree at Town Hall scheduled for 5:45 p.m. on Friday November 24 and the launch party with music by The Embers featuring Craig Woolard at 7 p.m. Friday at the Blockade Runner.

Each year 44 193 Americans die by suicide an average of 121 per day. Over twice as many people take their lives annually than are killed by homicide the American Foundation for Suicide Prevention reports.

In 2014 the suicide death rate in New Hanover County was 18.5 per 100 000 persons the 2015 Community Health Assessment reports more than deaths from female breast cancer and colon cancer combined.

The Out of Darkness Community Walk scheduled for Nov. 5 at the John NesbittLoop in Wrightsville Beach seeks to reduce those numbers by raising awareness and funds to prevent suicide.

“We’re trying to bring about awareness erasing the stigma with mental health and suicide ” says Rainey Scrocco chairwoman of the event.

The walk “is a journey of remembrance and a walk that unites a community — a time to acknowledge the ways in which suicide and mental illness have affected our lives and our loved ones ” the event website says.

Wilmington’s Touched by Suicide a peer-led support group and AFSP started the walk six years ago to raise money for research support and outreach programs and to honor loved ones lost to suicide. Funds will go to the AFSP.

In addition to the walk there will be a resource fair family activities including face painting and corn hole and other games.