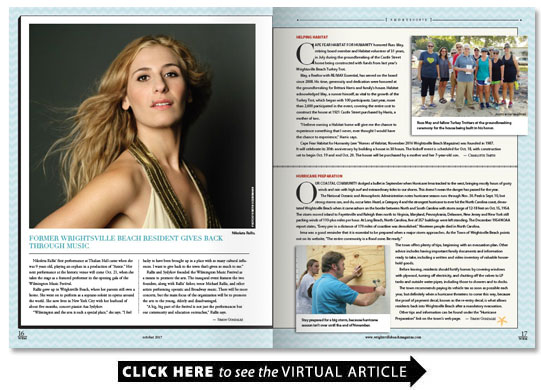 Nikoleta Rallis’ first performance at Thalian Hall came when she was 9 years old playing an orphan in a production of “Annie.” Her next performance at the historic venue will come Oct. 21 when she takes the stage as a featured performer in the opening gala of the Wilmington Music Festival.

Rallis grew up in Wrightsville Beach where her parents still own a home. She went on to perform as a soprano soloist in operas around the world. She now lives in New York City with her husband of about five months concert pianist Aza Sydykov.

“Wilmington and the area is such a special place ” she says. “I feel lucky to have been brought up in a place with so many cultural influences. I want to give back to the town that’s given so much to me.”

Rallis and Sydykov founded the Wilmington Music Festival as a means to promote the arts. The inaugural event features the two founders along with Rallis’ father tenor Michael Rallis and other artists performing operatic and Broadway music. There will be more concerts but the main focus of the organization will be to promote the arts to the young elderly and disadvantaged.

“A big big part of the festival is not just the performances but our community and education outreaches ” Rallis says.

Cape Fear Habitat for Humanity honored Russ May retiring board member and Habitat volunteer of 31 years in July during the groundbreaking of the Castle Street home being constructed with funds from last year’s Wrightsville Beach Turkey Trot.

May a Realtor with RE/MAX Essential has served on the board since 2008. His time generosity and dedication were honored at the groundbreaking for Brittani Harris and family’s house. Habitat acknowledged May a runner himself as vital to the growth of the Turkey Trot which began with 100 participants. Last year more than 2 600 participated in the event covering the entire cost to construct the house at 1921 Castle Street purchased by Harris a mother of two.

Cape Fear Habitat for Humanity (see “Homes of Habitat November 2016 Wrightsville Beach Magazine) was founded in 1987. It will celebrate its 30th anniversary by building a house in 30 hours. The kickoff event is scheduled for Oct. 18 with construction set to begin Oct. 19 and end Oct. 20. The house will be purchased by a mother and her 7-year-old son.

Our coastal community dodged a bullet in September when Hurricane Irma tracked to the west bringing mostly hours of gusty winds and rain with high surf and extraordinary tides to our shores. This doesn’t mean the danger has passed for the year.

The National Oceanic and Atmospheric Administration notes hurricane season runs through Nov. 30. Peak is Sept. 10 but strong storms can and do occur later. Hazel a Category 4 and the strongest hurricane to ever hit the North Carolina coast devastated Wrightsville Beach when it came ashore on the border between North and South Carolina with storm surge of 12-18 feet on Oct. 15 1954. The storm moved inland to Fayetteville and Raleigh then north to Virginia Maryland Pennsylvania Delaware New Jersey and New York still packing winds of 110-plus miles per hour. At Long Beach North Carolina five of 357 buildings were left standing. The December 1954 NOAA report states “Every pier in a distance of 170 miles of coastline was demolished.” Nineteen people died in North Carolina. Irma was a good reminder that it is essential to be prepared when a major storm approaches. As the Town of Wrightsville Beach points out on its website “The entire community is a flood zone. Be ready.”

The town offers plenty of tips beginning with an evacuation plan. Other advice includes having important family documents and information ready to take including a written and video inventory of valuable household goods.

Before leaving residents should fortify homes by covering windows with plywood turning off electricity and shutting off the valves to LP tanks and outside water pipes including those to showers and to docks.

The town recommends paying its vehicle tax as soon as possible each year but definitely when a hurricane threatens to come this way because the proof of payment decal known as the re-entry decal is what allows residents back into Wrightsville Beach after a mandatory evacuation.

Other tips and information can be found under the “Hurricane Preparation” link on the town’s web page.