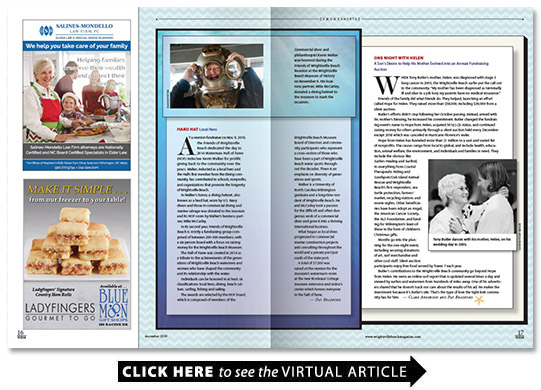 At a reunion fundraiser on Nov. 9 2019 the Friends of Wrightsville Beach dedicated the day to 2016 Waterman Hall of Fame (HOF) inductee Kevin Walker for prolific giving back to the community over the years. Walker inducted as a local hero and the Hall’s first member from the diving community has contributed to schools nonprofits and organizations that promote the longevity of Wrightsville Beach.

In Walker’s honor a diving helmet also known as a hard hat worn by U.S. Navy divers and those in commercial diving and marine salvage was donated to the museum and its HOF room by Walker’s business partner Mike McCarley.

The Hall of Fame was createdin 2014 as a tribute to the achievements of the generations ofWrightsville Beach watermen and women who have shaped the community and its relationship with the water.

The awards are selected by the HOF board which is composed of members of the Wrightsville Beach Museum Board of Directors and community participants who represent a cross-section of those who have been a part of Wrightsville Beach water sports throughout the decades. There is an emphasis on diversity of generations and sports.

Walker is a University of North Carolina Wilmington graduate and a long-time resident of Wrightsville Beach. He and McCarley took a passion for the difficult and often dangerous work of a commercial diver and grew it into a thriving international business.

What began as local dives progressed to commercial marine construction projects and consulting throughout the world and a private port just south of the state port.

A total of $7 500 was raised at the reunion for the museum’s waterman’s room at the new Bordeaux Cottage museum extension and visitor’s center which honors everyone in the hall of fame.


One Night with Helen

By Clark Anderson and Pat Bradford

When Tony Butler’s mother Helen was diagnosed with stage 3 lung cancer in 2005 the Wrightsville Beach surfer put the call out to the community: “My mother has been diagnosed as terminally ill and (due to a job loss) my parents have no medical insurance.”

Friends of the family did what friends do. They helped launching an effort called Hope for Helen. They raised more than $58 000 including $39 000 from a silent auction.

Butler’s efforts didn’t stop following her October passing. Instead armed with his mother’s blessing he increased his commitment. Butler changed the fundraising event’s name to Hope from Helen acquired 501(c) (3) status and continued raising money for others primarily through a silent auction held every December except 2018 which was canceled in Hurricane Florence’s wake.

Hope from Helen has funneled more than $1 million to a vast and varied list of nonprofits. The causes range from local to global and include health education animal welfare the environment and individuals and families in need. They include the obvious like Surfers Healing and SurfAid to everything from Coastal Therapeutic Riding and Southport/Oak Island Animal Rescue and Wrightsville Beach’s first responders sea turtle protection farmers’ market recycling stations and movie nights. Other beneficiaries have been Adopt an Angel the American Cancer Society the ALS Foundation and funding for Wilmington’s least-of-these in the form of children’s Christmas gifts.

Months go into the planning for the one-night event including securing donations of art surf merchandise and other cool stuff. Silent auction participants enjoy free food served by Tower 7 each year.

Butler’s contributions to the Wrightsville Beach community go beyond Hope from Helen. He owns an online surf report that is updated several times a day and viewed by surfers and watermen from hundreds of miles away. One of his advertisers shared that he doesn’t track nor care about the results of his ad. He makes the investment because it’s Butler’s site. That’s the type of love the tight-knit community has for him.