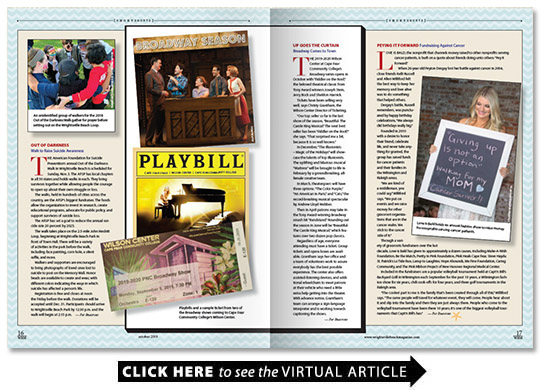 The American Foundation for Suicide Prevention’s annual Out of the Darkness Walk in Wrightsville Beach is scheduled for Sunday Nov. 3. The AFSP has local chapters in all 50 states and holds walks in each. They bring survivors together while allowing people the courage to open up about theirown struggle or loss.

The walks heldin hundreds of cities across the country are the AFSP’s biggest fundraiser. The funds allow the organization to invest in research create educational programs advocate for public policy and support survivors of suicide loss.

The AFSP has set a goal to reduce the annual suicide rate 20 percent by 2025.

The walk takes place on the 2.5-mile John Nesbitt Loop beginning at Wrightsville Beach Park in front of Town Hall. There will be a variety of activities in the park before the walk including face painting corn hole a silent raffle and more.

Walkers and supporters are encouraged to bring photographs of loved ones lost to suicide to post on the Memory Wall. Honor beads are available to create and wear with different colors indicating the ways in which suicide has affected a person’s life.

Registration is free and closes at noon the Friday before the walk. Donations will be accepted until Dec. 31. Participants should arrive to Wrightsville Beach Park by 12:30 p.m. and the walk will begin at 2:15 p.m. — Pat Bradford

Up Goes the Curtain

“Our top seller so far is the last show of the season “Beautiful: The Carole King Musical.” The next best seller has been “Fiddler on the Roof ‘” she says. “That surprised me a bit because it is so well known.”

In December “The Illusionists — Magic of the Holidays” will showcase thetalents of top illusionists. The uplifting and hilarious musical “Waitress” will be brought to life in February by a groundbreaking all-female creative team.

In March theatergoers will have three options: “The Color Purple ” “An American in Paris ” and “Cats ” the record-breaking musical spectacular by Andrew Lloyd Webber.

Then in April patrons may take in the Tony Award-winning Broadway smash hit”Bandstand.” Rounding out the season in June will be “Beautiful: The Carole King Musical ” which features over two dozen pop classics.

Regardless of age everyone attending must have a ticket. Group tickets and opera boxes are available.Grantham says her office and a team of volunteers work to assure everybody has the best possible experience. The center also offers assisted-listening devices and additional wheelchairs to meet patrons at their vehicle who need a little extra help getting into the theater. With advance notice Grantham’s team can arrange a sign-language interpreter and is working towards captioning the shows.

Love is Bald the nonprofit that channels money raised to other nonprofits serving cancer patients is built on a quote about friends doing unto others: “Pey it Forward.”

When 26-year old Peyton Dergay lost her battle against cancer in 2004 close friends Kelli Russell and Allen Williford felt the best way to keep her memory and love alive was to do something that helped others.

Founded in 2010 with a desire to honor their friend celebrate life and never take anything for granted the group has raised funds for cancer patients and their families in the Wilmington and Raleigh areas.

“We are kind of a middleman you could say ” Williford says. “We put on events and we raise money for other grassroot organizations that are in the cancer realm. We stick to the cancer side of it.”

Through a variety of grassroots fundraisers over the last decade Love is Bald has given to approximately a dozen causes including Make-A-Wish Foundation Be the Match Pretty in Pink Foundation Pink Heals Cape Fear Steve Haydu St. Patrick’s Lo Tide Run Lump to Laughter Hope Abounds Me Fine Foundation Caring Community and The Pink Ribbon Project of New Hanover Regional Medical Center.

Included in the fundraisers are a popular volleyball tournament held at Capt’n Bill’s Backyard Grill in Wilmington each September for the past 10 years a Wilmington fashion show for six years chili cook-offs for four years and three golf tournaments in the Raleigh area.

“The coolest part to me is the family that’s been created through all of this ” Williford says. “The same people will travel for whatever event they will come. People hear about it and slip into the family and then they are just always there. People who come to the volleyball tournament have been there 10 years; it’s one of the biggest volleyball tournaments that Capt’n Bill’s has.” — Pat Bradford