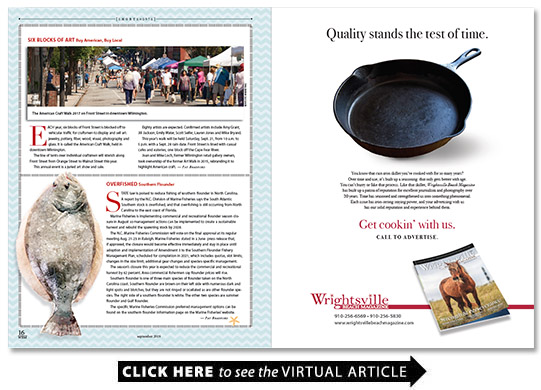 Each year six blocks of Front Street is blocked off to vehicular traffic for craftsmen to display and sell art: jewelry pottery fiber wood visual photography and glass. It is called the American Craft Walk held in downtown Wilmington.

The line of tents over individual craftsmen will stretch along Front Street from Orange Street to Walnut Street this year.

This annual event is a juried art show and sale.

This year’s walk will be held Saturday Sept. 21 from 10 a.m. to 5 p.m. with a Sept. 28 rain date. Front Street is lined with casual cafes and eateries one block off the Cape Fear River.

State law is poised to reduce fishing of southern flounder in North Carolina. A report by the N.C. Division of Marine Fisheries says the South Atlantic Southern stock is overfished and that overfishing is still occurring from North Carolina to the east coast of Florida.

Marine Fisheries is implementing commercial and recreational flounder season closure in August so management actions can be implemented to create a sustainable harvest and rebuild the spawning stock by 2028.

The N.C. Marine Fisheries Commission will vote on the final approval at its regular meeting Aug. 21-23 in Raleigh. Marine Fisheries stated in a June press release that if approved the closure would become effective immediately and stay in place until adoption and implementation of Amendment 3 to the Southern Flounder Fishery Management Plan scheduled for completion in 2021 which includes quotas slot limits changes in the size limit additional gear changes and species-specific management.

The season’s closure this year is expected to reduce the commercial and recreational harvest by 62 percent. Area commercial fishermen say flounder prices will rise.