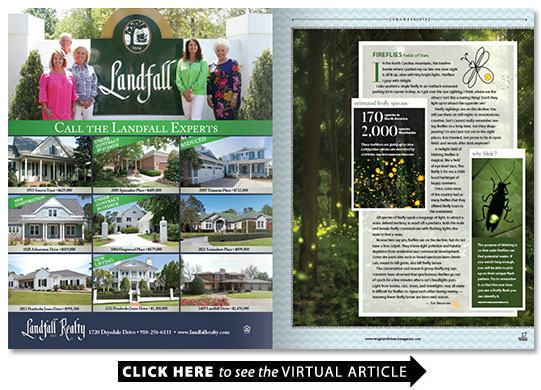 In the North Carolina mountains the treeline beside where I parked my car late one June night is all lit up alive with tiny bright lights. Fireflies! I gasp with delight.

I also spotted a single firefly in an Outback restaurant parking lot in Garner in May. As I got over the rare sighting I think where are the others? Isn’t this a mating thing? Don’t they light up to attract the opposite sex?

Firefly sightings are on the decline. You still see them on still nights in mountainous counties but I cannot really remember seeing fireflies in a long time. Are they disappearing? Or am I just not out in the right places less traveled not prone to be in open fields and woods after dark anymore?

A twilight field of blinking fireflies is magical like a field of eye-level stars. The firefly is for me a childhood harbinger of happy summers.

Once some areas of the country had so many fireflies that they offered firefly tours to the uninitiated.

All species of firefly speak a language of light to attract a mate defend territory to ward off a predator. Both the male and female firefly communicate with flashing lights; the male to find a mate.

Researchers say yes fireflies are on the decline but do not have a firm culprit. They blame light pollution and habitat depletionfrom residential and commercial development. Some site pesticidessuch as broad-spectrum lawn chemicals meant to kill grubs also kill firefly larvae.

The conservation and research groupFirefly.orgsays scientists have observed that synchronous fireflies go out of synch for a few minutes after a car’s headlights pass. Light from homes cars stores and streetlights may all make it difficult for fireflies to signal each other during mating — meaning fewer firefly larvae are born next season.

These numbers are going up as new Lampyridae species are described by scientists.

The purpose of blinking is so that male fireflies can find potential mates. If you watch long enough you will be able to pick up on their unique flash pattern. Try to remember it so that the next time you see a firefly flash you can identify it.