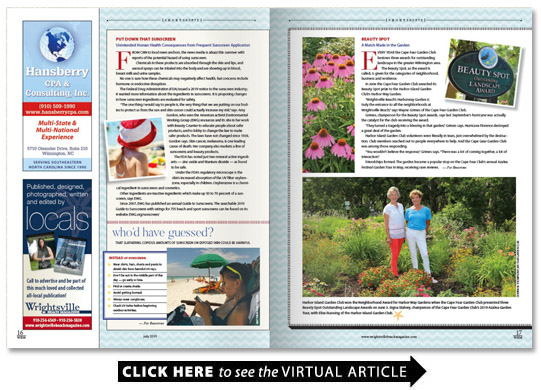 Put down that Sunscreen

From CNN to local news anchors the news media is abuzz this summer with reports of the potential hazard of using sunscreen.

Chemicals in these products are absorbed through the skin and lips and aerosol sprays can be inhaled into the body and are showing up in blood breast milk and urine samples.

No one is sure how these chemicals may negatively affect health but concerns include hormone or endocrine disruption.

The Federal Drug Administration (FDA) issued a 2019 notice to the sunscreen industry; it wanted more information about the ingredients in sunscreens. It is proposing changes in how sunscreen ingredients are evaluated for safety.

“The one thing I would say to people is the very thing that we are putting on our bodies to protect us from the sun and skin cancer could actually increase my risk ” says Amy Gordon who uses the American activist Environmental Working Group (EWG) resources and its site in her work with Beauty Counter to educate people about safer products and to lobby to change the law to make safer products. The laws have not changed since 1938 Gordon says. Skin cancer melanoma is one leading cause of death. Her company also markets a line of sunscreens and beauty products.

The FDA has noted just two mineral active ingredients — zinc oxide and titanium dioxide — as found to be safe.

Under the FDA’s regulatory microscope is the skin’s increased absorption of the UV filter oxybenzone especially in children. Oxybenzone is a chemical ingredient in sunscreens and cosmetics.

Other ingredients are inactive ingredients which make up 50 to 70 percent of a sunscreen says EWG.

That slathering copious amounts of sunscreen on exposed skin could be harmful?

Don’t be out in the middle part of the day — go early or late.

A Match Made in the Garden

The Beauty Spot as the award is called is given for the categories of neighborhood business and residence.

Grimes chairperson for the Beauty Spot awards says last September’s hurricane was actually the catalyst for the club receiving the award.

“They turned a tragedy into a blessing in that garden ” Grimes says. Hurricane Florence destroyed a great deal of the garden.

Harbor Island Garden Club volunteers were literally in tears just overwhelmed by the destruction. Club members reached out to people everywhere to help. And the Cape Gear Garden Club was among those responding.

“You wouldn’t believe the response ” Grimes says. “There was a lot of coming together a lot of interaction.”