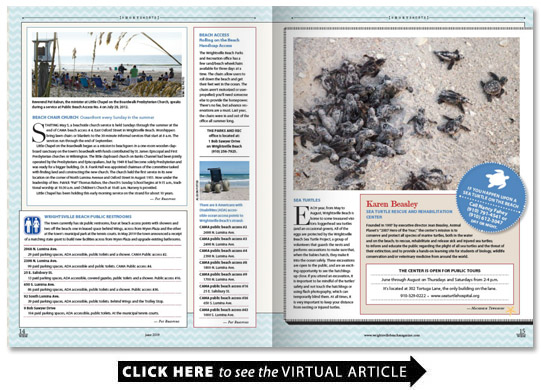 Beach Chair Church: Oceanfront every Sunday in the summer

Starting May 5 a beachside church service is held Sundays through the summer at the end of CAMA beach access # 4 East Oxford Street in Wrightsville Beach. Worshippers bring lawn chairs or blankets to the 30-minute informal services that start at 8 a.m. The services run through the end of September.

Little Chapel on the Boardwalk began as a mission to beachgoers in a one-room wooden clapboard sanctuary on the town’s boardwalk with funds contributed by St. James Episcopal and First Presbyterian churches in Wilmington. The little clapboard church on Banks Channel had been jointly operated by the Presbyterians and Episcopalians but by 1949 it had become solely Presbyterian and was ready for a bigger building. Dr. B. Frank Hall was appointed chairman of the committee tasked with finding land and constructing the new church. The church held the first service in its new location on the corner of North Lumina Avenue and Oxford Street in August 1951. Now under the leadership of Rev. Patrick “Pat” Thomas Rabun the church’s Sunday School begins at 9:15 a.m. traditional worship at 10:30 a.m. and Children’s Church at 10:45 a.m. Nursery is provided.

Little Chapel has been holding this early morning service on the strand for about 10 years.

The town currently has six public restrooms four at beach access points with showers and two off the beach: one in leased space behind Wings across from Wynn Plaza and the other at the town’s municipal park at the tennis courts. In May 2019 the town announced a receipt of a matching state grant to build new facilities across from Wynn Plaza and upgrade existing bathrooms.

The Wrightsville Beach Parks and Recreation office has a few sand/beach wheelchairs available for three days at a time. The chairs allow users to roll down the beach and get their feet wet in the ocean. The chairs aren’t motorized or user-propelled; you’ll need someone else to provide the horsepower. There’s no fee but advance reservations are a must. Last year the chairs were in and out of the office all summer long.

Each year from May to August Wrightsville Beach is home to some treasured visitors: loggerhead sea turtles (and an occasional green). All of the eggs are protected by the Wrightsville Beach Sea Turtle Project a group of volunteers that guards the nests and performs excavations to make sure that when the babies hatch they make it into the ocean safely. These excavations are open to the public and are an exciting opportunity to see the hatchlings up close. If you attend an excavation it is important to be mindful of the turtles’ safety and not touch the hatchlings or using flash photography which can temporarily blind them. At all times it is very important to keep your distance from nesting or injured turtles.

Founded in 1997 by executive director Jean Beasley Animal Planet’s “2007 Hero of the Year ” the center’s mission is to conserve and protect all species of marine turtles both in the water and on the beach; to rescue rehabilitate and release sick and injured sea turtles; to inform and educate the public regarding the plight of all sea turtles and the threat of their extinction; and to provide a hands-on learning site for students of biology wildlife conservation and/or veterinary medicine from around the world.

The center is open for public tours:

June through August on Thursdays and Saturdays from 2-4 p.m.

It’s located at 302 Tortuga Lane the only building on the lane.

If you happen upon a sea turtle on the beach: